Fisher Allen Chickite and photographer George Hunter may have never met, but they are both connected to our 1972 $5 bill.

Bank notes in the Scenes of Canada series required a number of lithographic plates to achieve the fading of one colour into one another—a beautiful, anti-counterfeiting measure. 5 dollars, Canada, 1972, NCC 1972.304.1

It was 1951, and eager for a life at sea, a 14-year-old boy signed on as a cook aboard his uncle’s fishing boat, the BCP45. His name was Allen (Ollie) Chickite, and he was from the We Wai Kai Nation of Quadra Island. It is one of the dozens of islands crowding the Johnstone Strait, between the northwest coast of Vancouver Island and the BC mainland.

Chickite worked on the BCP45 for 11 years, learning the fishing trade under his cousin, Skipper Mel Assu. Chickite later moved on to a series of boats, fishing the coast from Vancouver to the Alaska border. He returned to his beloved BCP45 periodically over the next 40 years and eventually became its skipper. BC Packers Ltd., who owned the aging wooden boat, offered to sell it to Chickite in 1983. He paid a ceremonial $1 for it and worked the BCP45 for another 13 years before he, and the boat, retired. 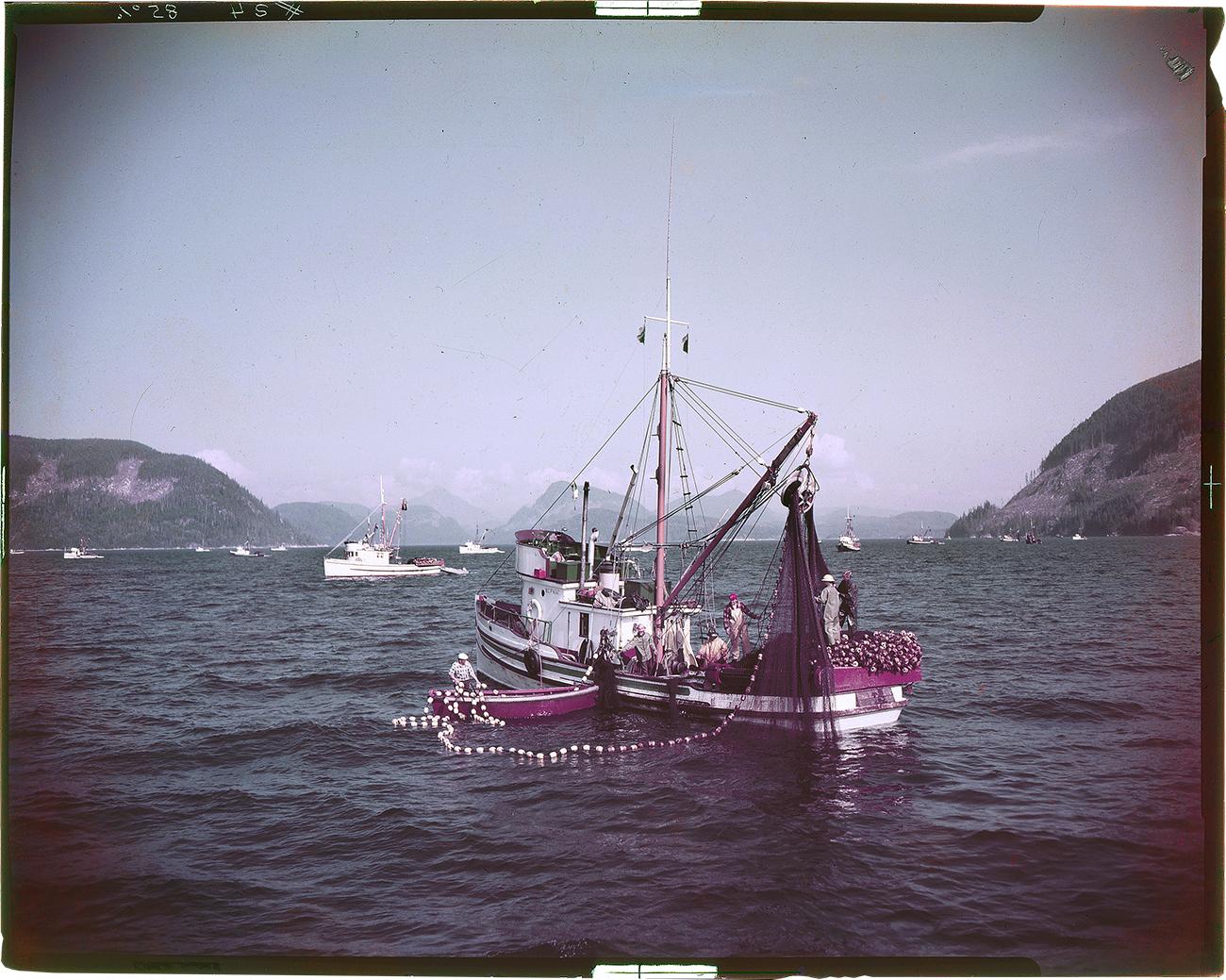 This is the George Hunter photograph from which the 1972 $5 vignette is engraved. The Bank owns the rights to the photograph and all images used to make bank note vignettes. Image: George Hunter, Canada, 1972, NCC 1990.57.3

George Hunter was one of Canada’s least known yet most published photographers. He is considered one of the greatest chroniclers of post-Second World War Canada. From a teenager until well into his 80s, Hunter could be found at steel mills, in Arctic snows, down mines and hanging out of (and falling out of) light aircraft all over the country. His pictures turned up in hundreds of magazines, calendars, industry publications and textbooks. For his entire career, and especially during his “retirement,” Hunter strove to raise the status of photography as an art form in Canada. He was also on a mission to promote pride in Canadians for the land and its diverse people. As he once said, “A country without appreciation of its heritage is not a country.”

In 1958, Hunter set up a camera at Ripple Point on the stunning Johnstone Strait. There, he photographed a typical salmon seiner at work. The boat happened to be the BCP45. The assignment was for The Weekly Star, a Sunday magazine produced by The Toronto Star newspaper. The photo was a cover shot. At that time, nobody imagined the photograph would become an iconic Canadian image that for many years would be carried in the pockets of millions of Canadians. Standing in the stern of BCP45 are two figures, and one of them is 21-year-old Ollie Chickite (or he may be in the rowboat—sources disagree). 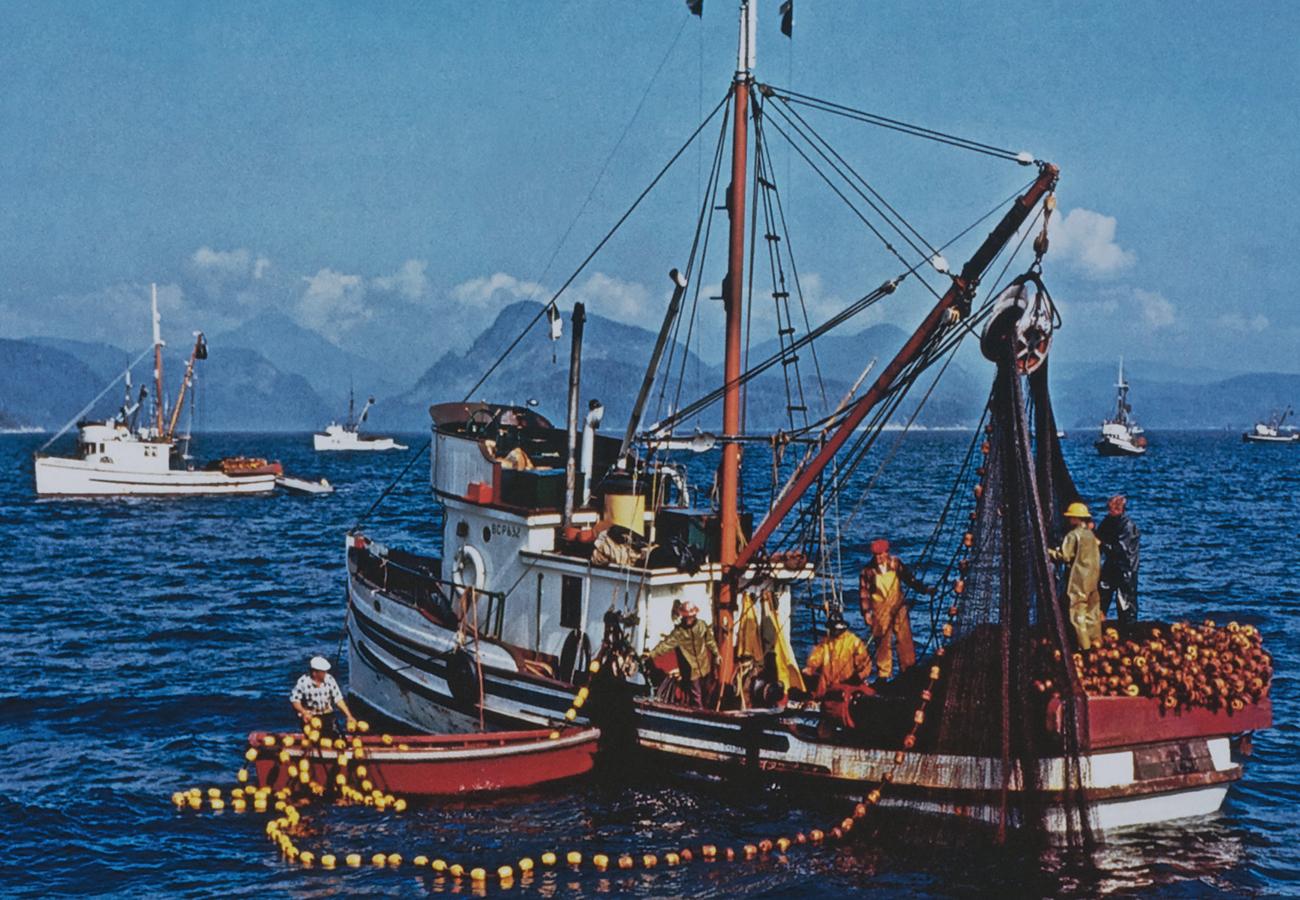 At the time of the photo, the BCP45 had an all-Indigenous crew: Mel Assu, Andy Dick, Fred Seville, Ron Forrest, Allen (Ollie) Chickite and Allan Mearns. The number on the cabin is a registration number, not the boat’s name.
Image: George Hunter, Canada, 1958, NCC 2012.28.1

This note is from the “Scenes of Canada,” or “Multicoloured,” series of the late 1960s and 1970s. The vignettes on the back of these notes were roughly described as landscapes with an element of human activity. 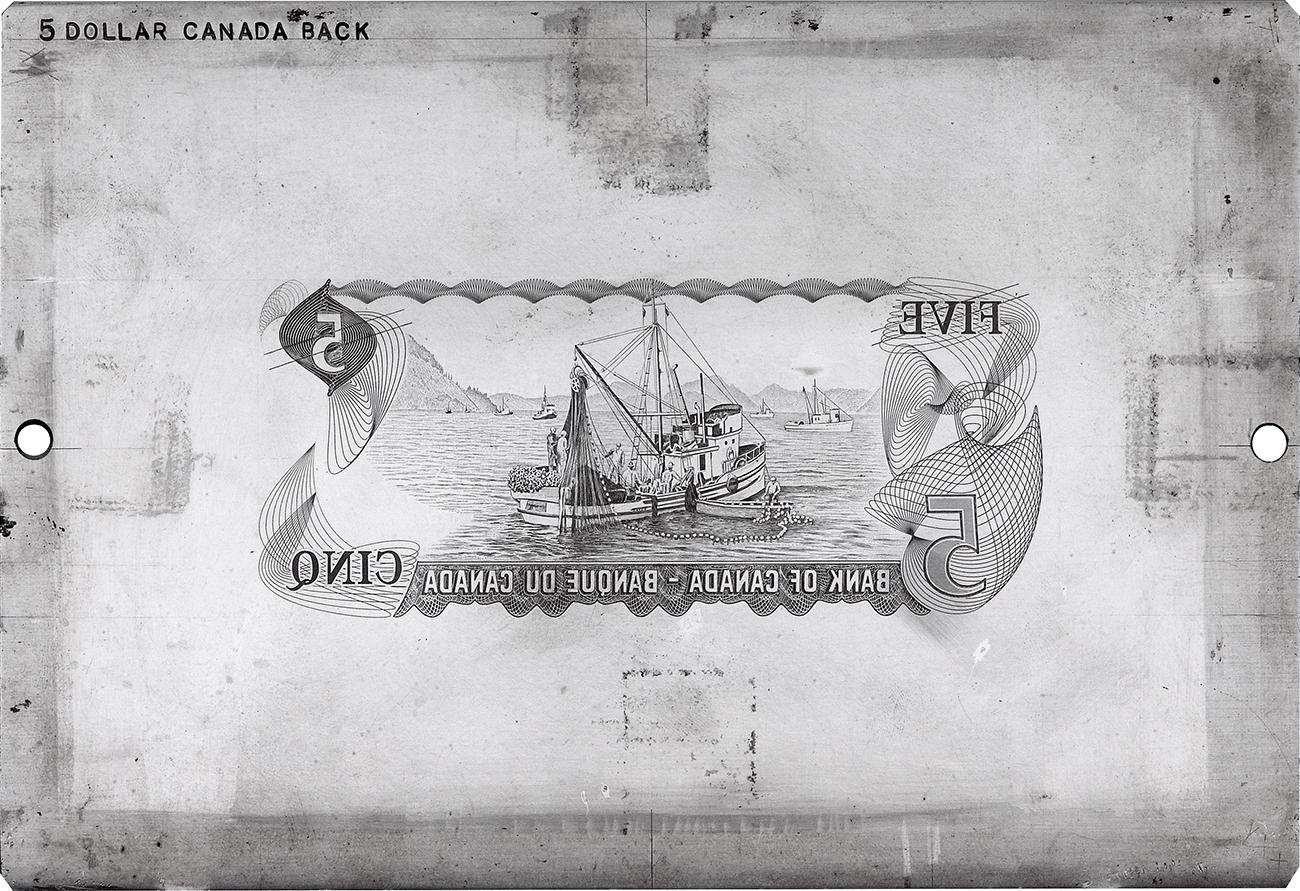 From this master printing plate, a cylindrical plate is produced and used to roll a set of 40 final printing plates onto one large sheet for the press. This is called “siderography.” 5 dollars, printing plate, Canada, 1972, NCC 1993.57.2

Some classic Canadian occupations like fishing, hunting, shipping and logging were featured. The George Hunter image chosen for the $5 note suited the series perfectly, with both a stunning landscape and a traditional activity. It is a highly detailed image, ideal for a difficult to counterfeit engraving. Hunter left considerable room at the top and bottom of the frame and master engraver George Gundersen was able to easily crop it to perfectly suit the bank note format. The engraving was finished by C. Gordon Yorke, who increased the contrast in the mountains and the water. The engraving is otherwise almost exactly like the photograph. 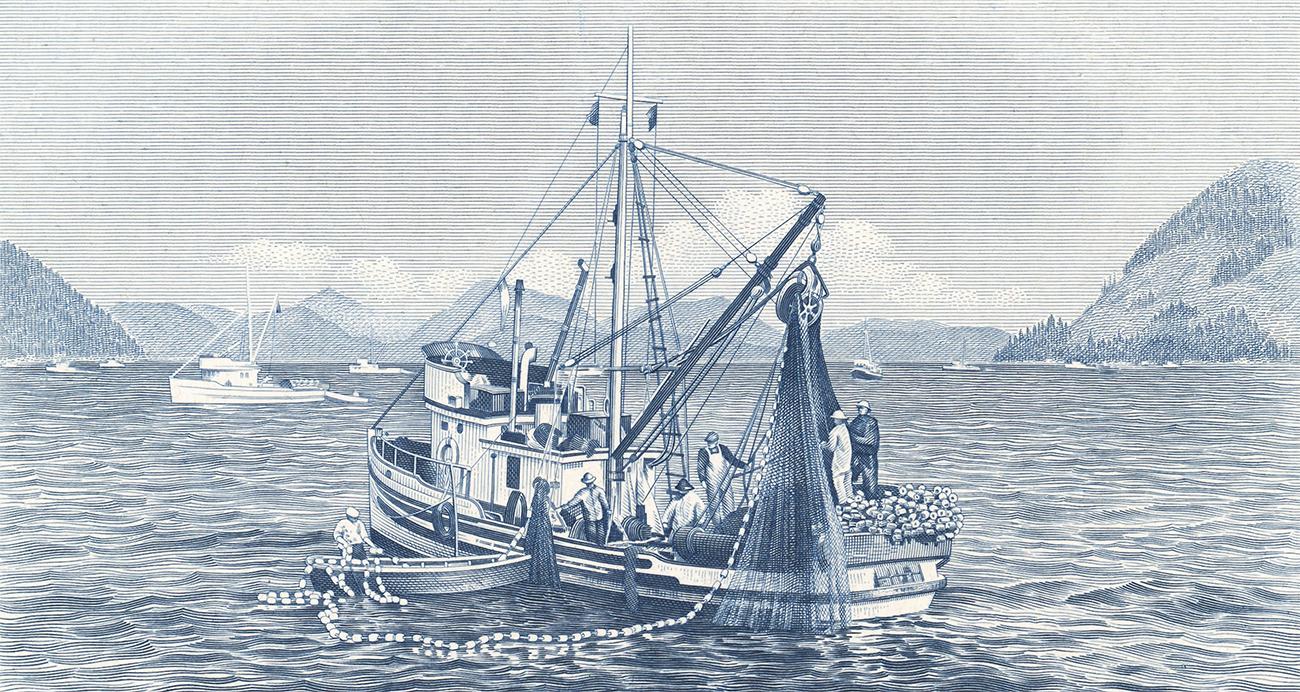 This “die proof,” or test print, is taken from the original engraving. From it, the engraver would learn what adjustments he had to make to the final engraving and how well it appeared in its colour. 5 dollars, die proof, Canada, 1972, NCC 2011.67.895

Seine fishing (pronounced “sane”) involves closing a very long net around a school of fish. It is an ancient method done by hand on a beach or from a rowboat. A “seiner” is a motor vessel designed to do the same job on a far larger scale. 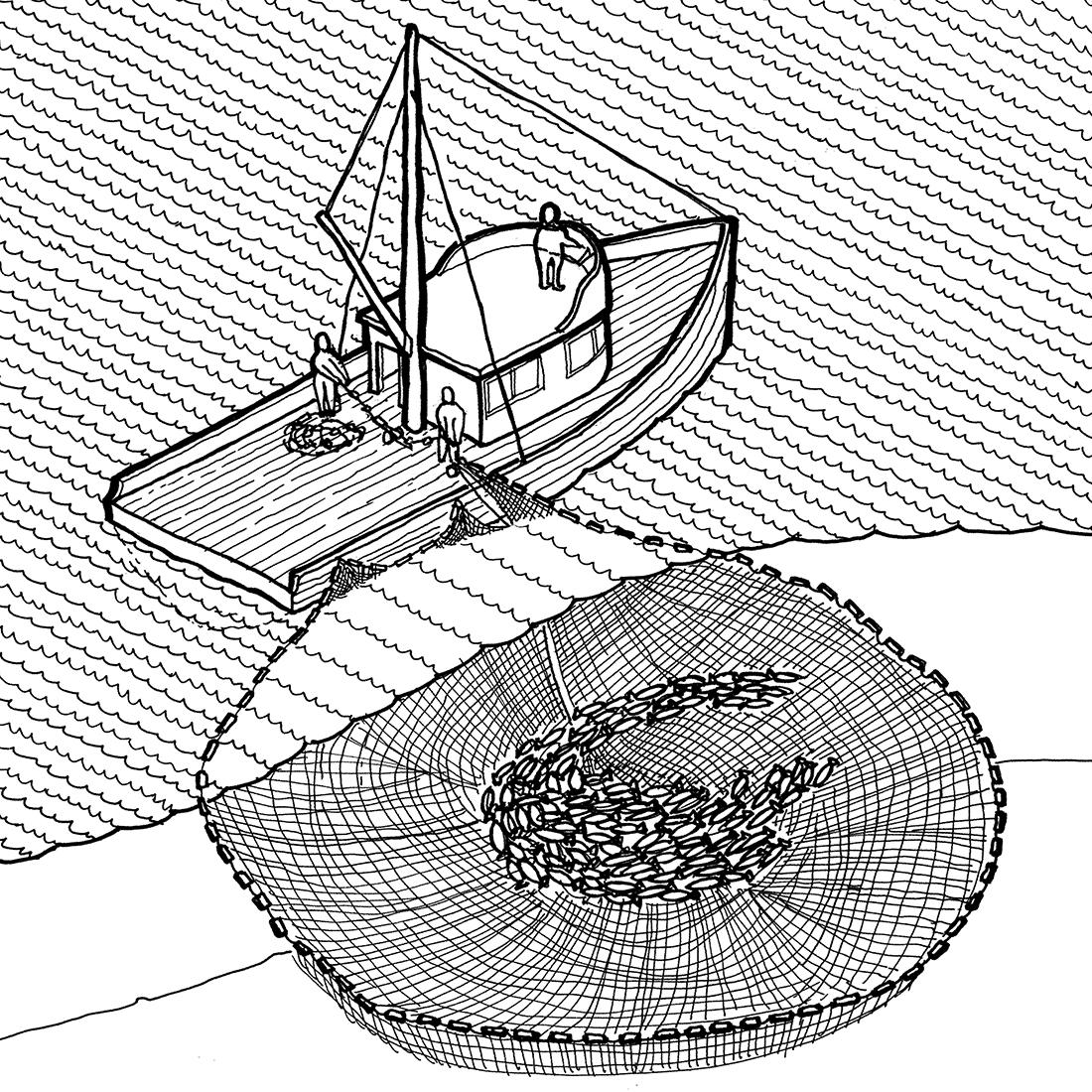 The net, attached to the boat and previously open, is drawn together, capturing a school of fish. This is called a “purse seine.” Image: Tim Whitely, Historical American Engineering Record, Wikimedia Commons

In 1927, BC Packers Ltd. purchased a 53-foot (16-metre) wooden “table” seiner from the Burrard Shipyard in Vancouver. The boat is called a “table” seiner because the net, when stored, is folded on a table that swings outward. It came with a 50-horsepower engine and was designed to accommodate a crew of 6 and 30,000 pounds (13,000 kilograms) of fish. With no apparent sentiment or romance, it was christened the BCP45.

BCP45 would fish the waters off the east coast of Vancouver Island for an astounding 68 years. When Ollie Chickite took it over in the early 1980s, it was one of the last classic wooden seiners still working the coast and was of great historical value. Chickite sailed the BCP45 to Expo ’86 in Vancouver. Hundreds of visitors boarded the old vessel and chatted with its proud skipper. Maclean’s magazine voted it #6 of the 185 exhibits at Expo ’86.

When Chickite retired the BCP45, he donated it to the Vancouver Maritime Museum. At that time, the museum didn’t have the resources to restore the old boat and for several years it remained moored in Vancouver’s False Creek, quietly deteriorating. In 2002, with the advent of the Maritime Heritage Centre in Campbell River, Chickite sailed the old boat back to its home waters. The BCP45 was restored by a passionate and skilled volunteer crew, who virtually rebuilt it. Today, it’s in perfect condition, restored to its 1958 specifications. In 2010, the BCP45 was designated an official Historic Site of Canada and is the star exhibit at the Heritage Centre. 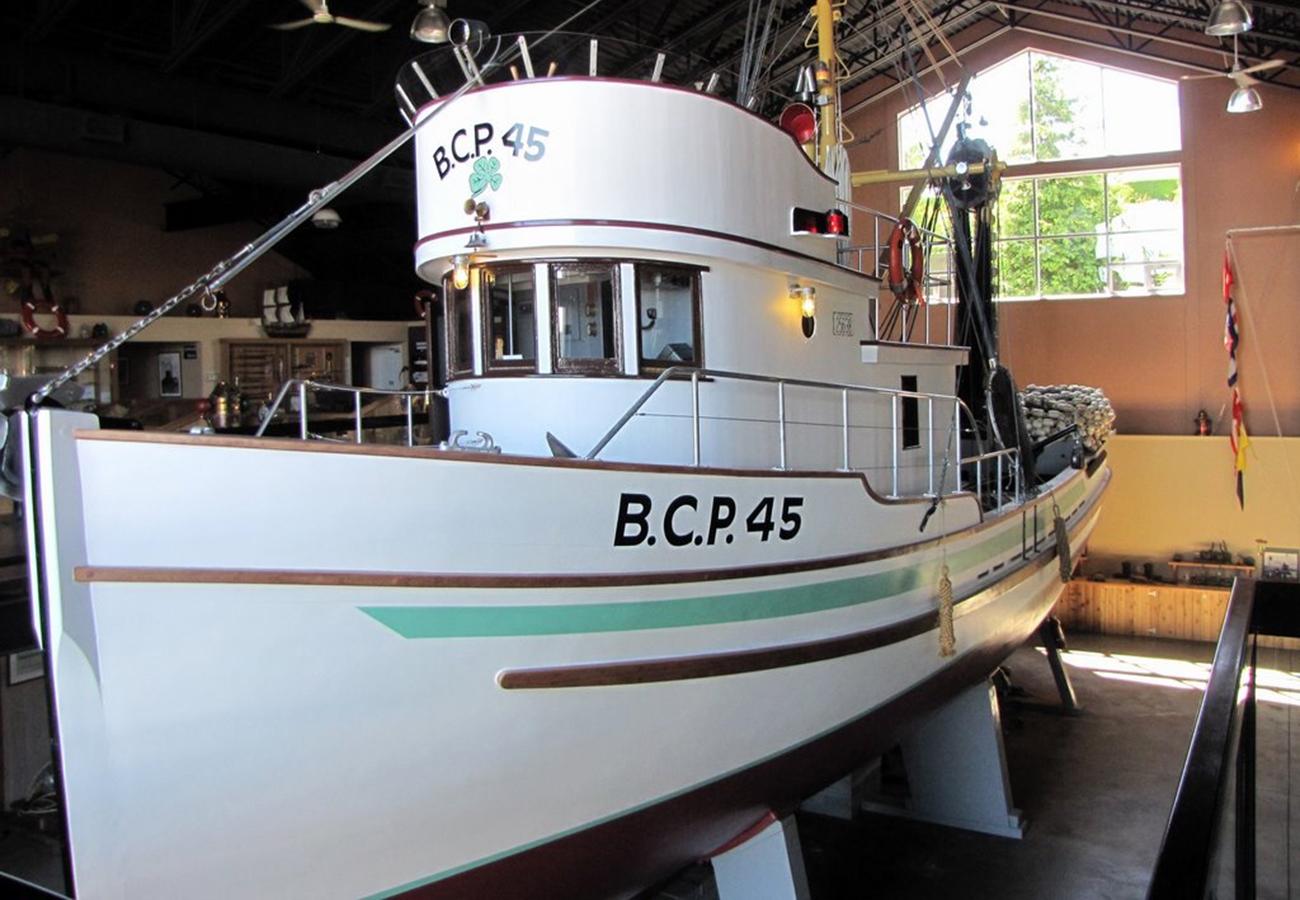 BCP45 in its Campbell River home. It looks quite small in this picture, but it is as long as the box of a semi-trailer. Image: Redonebird, Wikimedia Commons

Partly because of its high-profile appearance on Canadian currency, some refer to the BCP45 as the West Coast’s Bluenose. Like the world-famous schooner, the BCP45 is also a symbol of an industry and way of life. There’s little doubt that the BCP45 is lovingly preserved today partly thanks to being immortalized on this beautiful blue bank note.