Mishap on the dollar


The Scenes of Canada one-dollar bill

Thanks to a bank note, an image of a river of logs floating past Parliament Hill has long lived in Canadian collective memory. Though beautiful and evocative, the image is actually showing an accident.

Bank of Canada staff referred to this series of bank notes as the multicoloured series for the colour patterns that flow behind the dominant colour theme of each note. The $1 is the most subtle.
Source: 1 dollar, Canada, 1973 | NCC 1973.122.1

Logging has long been an iconic Canadian industry, one of Canada’s founding economic building blocks. And part of its birth originated with an aggressively ambitious fellow named Napoleon Bonaparte. When Napoleon’s advances across Europe cut England off from its traditional timber sources, it turned to heavily forested British North America to supply the wood it desperately needed. The old-growth eastern white pines of what is now Ontario made ideal masts for the great warships of the era, and the industry quickly expanded, producing lumber of all kinds.

Many lakes and rivers that drained into the Ottawa River became the secondary highways of the industry. Millions of logs were floated downstream to the Ottawa, en route to the St. Lawrence River and the dock yards of Montréal and Québec.

Booms of old-growth logs float in the Ottawa River west of Nepean Point in Ottawa. Parliament Hill is out of frame on the right.
Source: Postcard, Valentine & Sons publishing, Canada, 1906 Bytown Museum, P4344

On the Ottawa, timber was contained inside booms, huge loops of logs chained together. At waterfalls and rapids, man-made channels called slides allowed the logs to bypass these natural barriers. Ottawa’s Chaudière Falls—sacred to the Anishinaabe people and called “Akikpautik”—presented just such a barrier. A booming lumber industry sprung up on the nearby shores and islands of Hull (Gatineau) in Quebec and Bytown (Ottawa) in Ontario. Mills drew their power from the movement of the mighty river, and the beautiful Chaudière Falls were corralled to provide hydroelectricity.

The industry that made a capital

Before the government claimed it, Ottawa was a lumber town.

The lumber barons who gave Ottawa and Gatineau such street names as Bronson, Wright, Booth, Maclaren, Gilmour and Eddy laid the economic foundations of Ottawa. They built sawmills and railways, owned fleets of river boats and employed tens of thousands of labourers. But the timber boom in eastern Canada was already tapering off by the turn of the 20th century.

The sawmills and lumber yards remained features of Ottawa and Hull for another generation until replaced by the pulp and paper industry. The last pulp log booms passed Parliament Hill in the early 1990s. Today, there is only one functioning mill in this once bustling industrial hub. Far from cutting lumber out of mighty white pines, it manufactures paper towels and tissues.

This saw could cut several boards of a specific thickness in one pass of a single log: the Perley and Pattee Sawmill, Ottawa.
Source: Photograph, c.1880s, Canada Bytown Museum P2738c_001

On a sunny summer day in 1963, Aldomat Legault was piloting a small tugboat, the Missinaibi, towing a log boom up the Ottawa River to the E.B. Eddy plant. Without warning, the boom broke open and thousands of logs escaped, drifting in the strong current. With help from other boats on the Ottawa that day, Legault was able to gather the logs back together and finish his delivery. “It’s not often you see that kind of break,” recalled Legault in an interview with the Ottawa Citizen. “It was quite a sight right in front of the Parliament Buildings.”

When the boom broke, photographer Malak Karsh happened to be at the E.B. Eddy plant on the Hull shore. He was on assignment for the Canadian Pulp and Paper Association. Attracted by the amazing sight of a river full of logs, he stepped aboard another tugboat and took what became one of his most famous images. Malak Karsh was a noted photographer who worked in the Ottawa area on commercial and industrial assignments. And yes, famous portrait photographer Yousef Karsh was his big brother.

We have three versions of this image in our collection. This is the closest to the engraving on the bank note. It is titled “Paper and Politics.”
Source: Photograph by Malak of Ottawa, 1963⁠| ©Bank of Canada, NCC 1993.56.297

C. Gordon Yorke was the talented engraver who created the back vignettes for the $1, $2, $5 and $100 bank notes of this series. He also engraved the portraits of Sir Wilfrid Laurier and Sir Robert Borden.
Source: Photograph by Malak of Ottawa, 1973

The image on the back of the Scenes of Canada one-dollar bill is very well suited to the general theme of the series. It is a landscape with human activity, sweetened with a dash of the sentimental.

Engraver C. Gordon Yorke took some liberties with the image, reducing the number of logs in the scene to simplify the visual chaos. Curiously, he removed the men from the decks of both tugboats. There is no clear reason why, as he included all the men in the fishing boat on the $5 bill. He also added a flag to the Peace Tower. There was no flag flying from the Peace Tower at that moment, a highly unusual occurrence.

This test print, or proof, shows the “guilloche” patterns combined with the vignette on a single engraved steel plate. Additional guilloche shapes that appeared on the final note in blue were from a lithographic plate.
Source: 1 dollar, proof print, 1972, Canada | NCC 2011.67.748

The boats on the bill

The Missinaibi is an 11-metre, steel-hulled tugboat designed and built for the lumber trade by the Russel-Hipwell Engine Co. of Owen Sound, Ontario. The Missinaibi was launched in 1952. Retired from log driving about the time our bank note was issued, the old tug sat in a Gatineau boat yard for 10 years until it was restored by the Canadian Museum of Civilization (now called the Canadian Museum of History) and placed on the riverbank behind the museum.

In the background of the engraving is a smaller tugboat, the Ancaster, also built by Russel-Hipwell. In 1979, it sank near the Chaudière Falls dam. Ontario Hydro raised the vessel and, with an enthusiastic crew of hydro workers, restored it. It is now on display at the Owen Sound Marine and Rail Museum.

Like the BCP45, the fishing boat on the $5 bill of this series, these boats undoubtedly owe their preservation to their appearance on a bank note. The little tugs are two of the few remaining physical links to the industrial heritage of the Ottawa region, industry that helped define much of the nation and its economy.

The site of the E.B. Eddy plant is now the home of the Canadian Museum of History. The Missinaibi is displayed behind the museum, close to where Malak Karsh’s photograph was taken.
Source: Photograph by Douglas Sprott, 2010, via Flicker

Below the Canadian Museum of history, close to the Missinaibi, is this clever exhibit that allows you to view Parliament Hill through a cut-out in the Malak image.
Source: Photograph by David Bergeron, 2020

The last sheet of Scenes of Canada $1 bills rolled off the press on April 20, 1989. They were also the last $1 bank notes the Bank of Canada issued. By then Canadians had been getting used to the loonie ($1 coin) for nearly two years, and in 1996, the $2 bill would also be replaced by a coin. 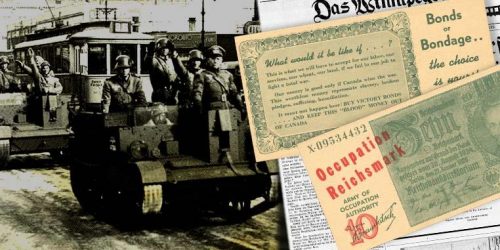 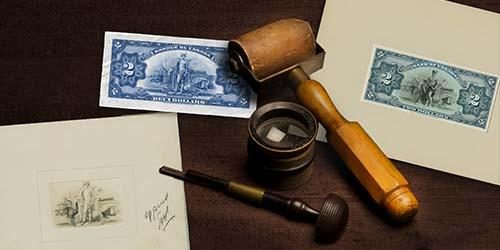 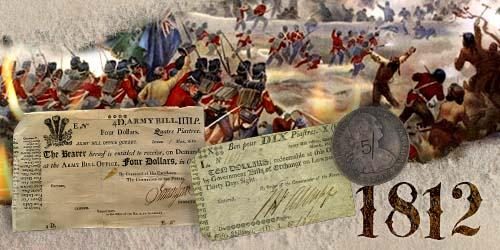