From one medium to another

The release of the two-dollar coin and a bit of dark trivia about Canada’s two-dollar bill. 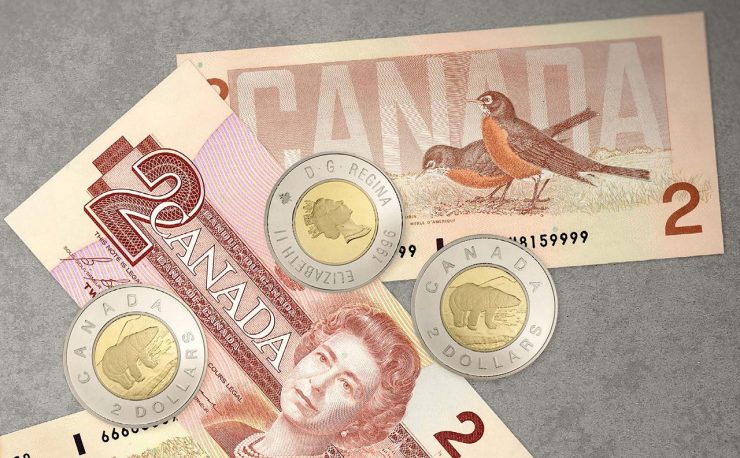 The very last two-dollar notes ever printed, and the toonie that replaced them.

A note with a reputation? 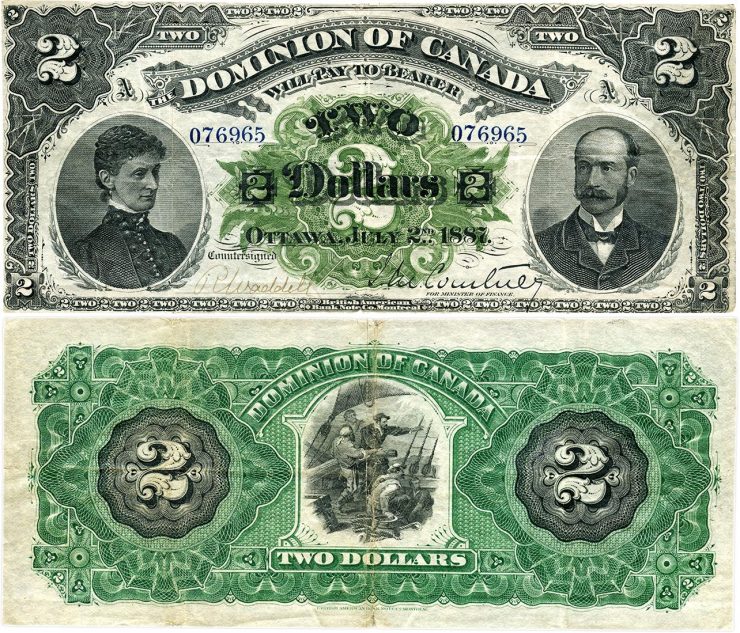 This note would have been in circulation soon after the Canadian Pacific Railroad opened the West up to mass settlement. The portraits are of the Governor General and his wife, the Marquis and Marchioness of Lansdown. 2 dollars, Dominion of Canada, 1887. NCC 1964.88.875

The Canadian two-dollar note had been around since before Confederation. But to a Western Canadian, a two-dollar bill was a relatively unfamiliar thing. As the story goes, this note became associated with the shadier dealings of the frontier era—specifically prostitution. Though this association is purely hearsay, the two-dollar bill was never popular out west. 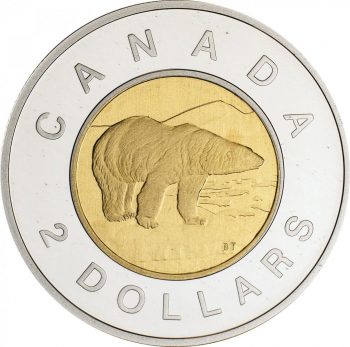 In 1996, the paper note was replaced by a coin. Of course, that decision had nothing to do with any sordid associations Westerners might have had for these innocent notes. It was an economic decision—a cost-saving measure.

Paper bills simply don’t hold up to daily wear and tear nearly as well as coins do. The life expectancy of a two-dollar note was about a year. But coins can last more than 10 years. Even a polymer bank note, such as those Canada now produces, can’t match that sort of longevity. Although minting a coin costs far more than printing a note, the coin option is definitely more affordable when you consider the cost of printing 10 notes for every coin. And the history of the toonie bears that out.

Although some Canadians were happy to see the old two-dollar notes disappear, the new coin initially met with some resistance. There were even rumours that the centre sections might fall out. These reports proved untrue and Canadians soon adapted to the new coin. After all, it is convenient for vending machines and parking meters.

In fact, the new coin ended up being so well received that the Royal Canadian Mint had to ramp up production. Some 325 million two-dollar coins were struck in the first year alone. If you periodically check your change, it’s very possible you’ll still find toonies from the first minting of 1996. Since then, annual production has varied between 10 and 30 million.

The original bird artwork for this note series was provided by renowned nature artist, John Crosby. He is best known for illustrating The Birds of Canada by W. Earl Godfrey. 2 dollars, Canada, 1986, NCC 1986.42.3

If you find this Scenes of Canada series $2 bill in your change, hang on to it. Master engraver C. Gordon Yorke created this image of hunters at Pond Inlet, Nunavut in the early 70s. It is from a photograph by Doug Wilkinson. 2 dollars, Canada, 1974, NCC 1975.185.1

A coin becomes a toonie

As its popularity grew, Canadians gave the two-dollar coin its affectionate nickname. For those of you unfamiliar with why, here’s a quick bit of social history. The Canadian one-dollar coin, featuring an illustration of a loon, quickly picked up the name “loonie.” Instead of some sort of polar bear reference, the new coin became known as a “toonie,” as in two loonies. In fact, the “bearie” was put forward, but a nickname has a life of its own and “toonie” appears to be here to stay.

In 2006, the Mint opened a competition to name the bear on the toonie. Churchill was the winning name—a reference to the Manitoba town famous for polar bear watching. The runners up were Wilbert and Plouf.

So we decided to provide some winter-themed indoor activities for families out and about during Winterlude who’d like to either warm up or lessen their disappointment at not being able to skate.
Content Type(s): Blog Subject(s): News & Events
January 30, 2018

Now you might wonder just how a museum specializing in economics and currency expects to interpret the history of a legendary arctic explorer—through money, of course.
Content Type(s): Blog Subject(s): Exhibitions
January 17, 2018

The meat of the traditional museum experience is found in Block B. Here you will see vintage radio sets, encrypting teletype machines, more Enigma machines and a working reproduction of the “Bombe.”
Content Type(s): Blog Subject(s): Reviews
January 3, 2018

Now that we are again back in our house, we’ve invited one of our wandering exhibitions home for a visit: Decoding E-Money.
Content Type(s): Blog Subject(s): Exhibitions
December 19, 2017

The Price of Victory

We opened the Museum doors at noon on Saturday, November 11, and to my amazement, more than 70 visitors flooded our entrance in the first hour.
Content Type(s): Blog Subject(s): News & Events
November 23, 2017

Every year the conference of the International Federation of Finance Museums (IFFM) draws museum directors from five continents to a get-together aimed at sharing best-practices and keeping up with the latest trends in the world of financial museums. This year was the Bank’s first opportunity to attend the conference with a museum in fully-operational mode.
Content Type(s): Blog Subject(s): News & Events
November 8, 2017

Imagine your kids nagging you to visit a great cathedral or whining, “Kevin’s family got to go on a walking tour of Oxford, why can’t we?” Oddly enough, this scenario may not as far fetched as it sounds.
Content Type(s): Blog Subject(s): Reviews
October 23, 2017

I have several key responsibilities to meet the requirements of my job. None of them is more gratifying than conducting research about the incredible artifacts in the Bank’s collection.
Content Type(s): Blog Subject(s): Collection
October 10, 2017

I was taken aback to discover that it was not about the battle at all but, rather, was about commemoration…
Content Type(s): Blog Subject(s): Reviews