I imagine many organizations in Ottawa are thinking that it would be nice if the first of July was just a little farther off—like September, maybe. Sure, we too could benefit from more time before our opening, but the stress of a looming deadline just makes you stronger, right?  The Museum is, for all intents and purposes, complete. The last few stragglers among our artifacts are ready for installation and the interactives and digital labels are bulking up with the final software and data in them, so it’s all there, functional and looking fantastic. 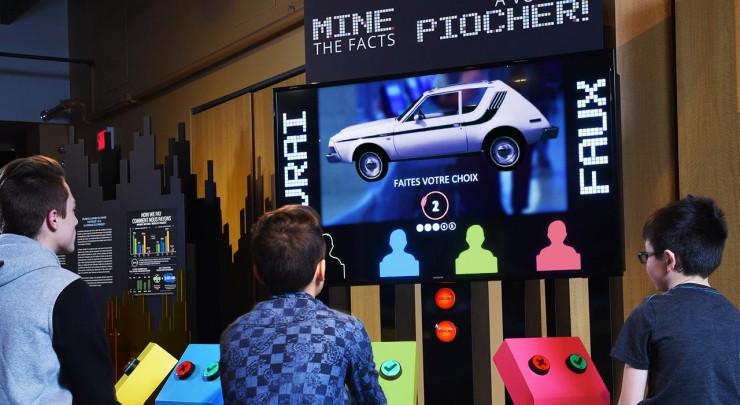 Highly digital exhibitions can have all sorts of little problems lurking inside them. These young volunteers helped us test our Decoding E-Money exhibition last year.

For a couple of weeks, now, technicians have been pulling levers, cranking wheels and swiping and tapping every touch panel in the Museum and will continue do so until the doors officially open. All that is well and good, but what about getting a sense of how people who know nothing about the Museum would respond to the interactives and understand the content? How might we do that before they arrive so we can make those little tweaks and adjustments that help to create that “it just works” feeling? 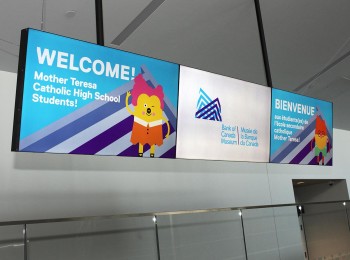 We invited teens from Mother Teresa and Sir Guy Carleton high schools in Ottawa to test our facility. 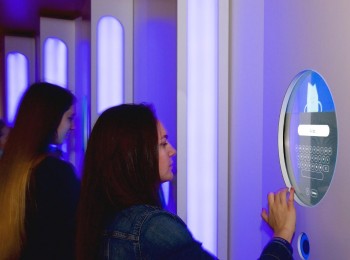 The first thing you do at our museum is create an alias and a little cartoon character (avatar) to accompany you on your digital journey.

At the end of May we invited students from local schools to come into the Museum and, ready or not, take it for a spin around the block. Twenty teenagers participated, bringing with them a broad range of learning styles and curiosity (or not) in the Bank and economics. They were at the younger end of our primary target audience (15–25) and a predictably difficult demographic to attract to this kind of subject. At the very least, we could rely on their frankness. 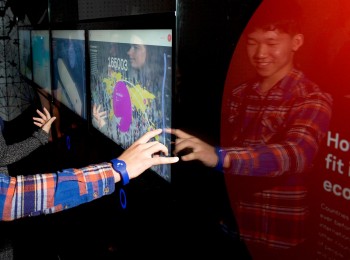 Demonstrating the virtuoso tap and swipe skills typical of their generation, students moved quickly through the exhibits. 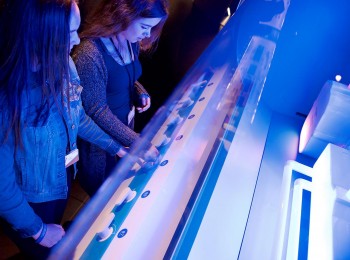 Some of our testers wanted to know more about the processes behind such interactive stations as this one demonstrating the payments system.

Although most of the hands-on aspects of the Museum were designed for just this sort of audience, it was still amazing to watch how naturally the kids manipulated the touch panels. They seemed to instinctively know when to swipe and tap, whereas duffers like me often had to pause and think it through. It was most interesting, though, to see what captured their attention. We have one unit that is a full-on video game which of course made a hit. But a surprising number of kids found the plumbing-themed interactive that helps to introduce the Bank’s role in maintaining the safe and efficient operation of the key elements of the financial system very absorbing—and quite a few really got caught up in the foreign currency area of the artifact display cases.

The radio frequency ID bracelets were also very popular. This wearable technology carries visitors’ language preferences as well as their aliases and the little cartoon avatars they build before entering the gallery. For the interactives, visitors just have to tap their bracelets on a bright circle to have the unit operate in their chosen (official) language and for many of the stations, visitors’ avatars and aliases will also pop up. Our guests really liked this aspect and wanted to see their little characters showing up wherever they logged in with a bracelet—even in videos alongside the Governor. Something we didn’t see coming: the students didn’t like saying goodbye to their avatars. They wanted some means of taking them home: more food for thought. 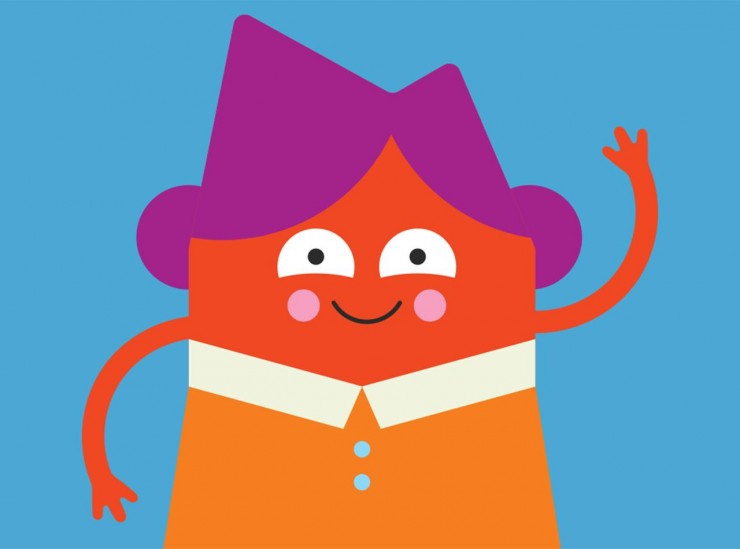 One of the hundreds of combinations of details visitors can assemble for their avatars.

Likes and dislikes were explored more deeply at an afternoon de-briefing in the “IdeaSpace,” the Bank’s highly flexible, and very comfortable, meeting and brainstorming centre. Enlarged floorplans of the Museum were tacked on the walls and the students were asked to place sticky notes on features they really liked or those they didn’t, as well as where they encountered problems.

A dozen kids at a time participated in our testing. 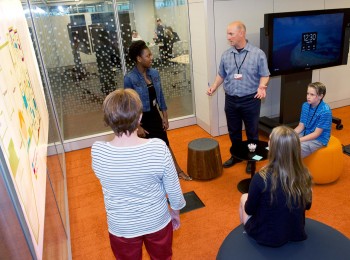 The students were divided into groups and were able to work in separate areas to brainstorm and compare experiences. 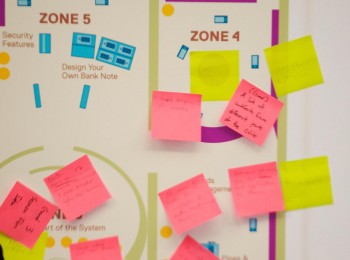 There was no shortage of responses and ideas.

All sorts of comments popped up about seating, lighting and sound levels, placements of signage and computer performance. These were the sort of practical things one expects to discover before opening day. What was gratifying was the interest the kids had in learning more about the topics that had been “gamified.” Where they were asked to play a game or adjust levers and wheels, they often wanted more background information on the subject or wanted the interactive’s metaphor more deeply explained. (Interest had been piqued!) Also, for a generation that is more at home with a smartphone than a book, it was interesting to see that they still wanted and expected to see traditional, printed labels beside the artifacts.

This was a very valuable experience for us and we will be doing more such testing sessions in the future. Many of the suggestions we can act upon immediately; some will have to wait for a while—like the one in which students recommended that the inflation control interactive have four levels: beginner, intermediate, expert and insane. We’ll speak to our technology team about that one after opening day. 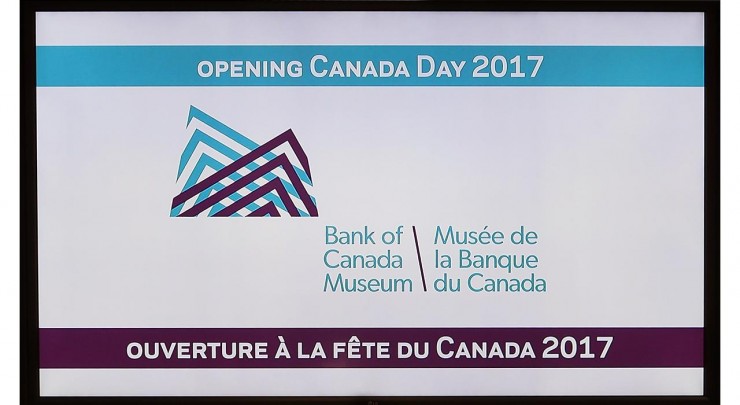 Turquoise and purple are our new brand colours. Look for them on signage, advertising and even the front doors of the Museum.

Among other events preceding our opening day was our participation in Doors Open Ottawa 2017. Relax, our doors were not actually open on 4 June; Canada Day is still our opening day. However, we took the opportunity to provide people with a virtual look at the Museum. 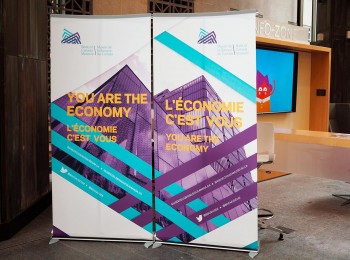 Our tag line embodies our intention of putting visitors in the centre of their own economic story. 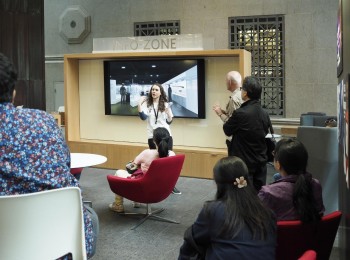 One of our new museum guides provides her chatty spiel to Doors Open visitors in the Bank’s InfoCentre, a newspaper and media resource centre.

The Bank invited the public into its spectacular 12-story atrium, the “Knowledge” information centre and the beautiful 1938 entrance hall with its mulicoloured marble finishes and art deco details. The tour included a stop at the Museum’s kiosk where visitors were given a little introductory chat about the Museum in addition to being shown a video. The video consisted mostly of conceptual images, but they are accurate ones and very good for raising expectations and piquing curiosity. In all, more than 750 people participated in the Bank’s Doors Open event and the Museum got some great news coverage (sorry, English only). On Canada Day, instead of doors open, it will be open doors—nothing virtual about it. Come check us out.