This deserves a bank note

In 1967, the Bank of Canada issued a one-dollar bill commemorating the centennial of Canadian confederation. At a glance, it looked just like the existing one-dollar design but for a discreet Centennial logo on the front. An engraving of Parliament Hill’s original Centre Block replaced the Prairie scene on the back. It was a simple and elegant commemoration, but not one to embrace the evolving culture of a progressive, mid-20th century Canada. In the last 50 years, we have certainly become more aware that Canada’s cultural and regional diversity is a key part of our nation’s identity. However, it’s an enormous challenge to represent such concepts on a 7 by 15 centimetre piece of polymer. I’m afraid a fine old engraving of Centre Block just wouldn’t cut the mustard these days.

This engraving was once used on the face of an 1872 Dominion of Canada $100 bank note.

On 7 April, the Bank of Canada unveiled the design of an upcoming bank note that commemorates Canada’s 150th birthday and I can safely say that the mustard has been definitively cut.

Compare the large number of visual elements of this note with those of the 1967 note.

Almost all Canadians should be able to discover pride in or be able to identify with one of the landscapes featured.

It’s a note featuring a number of Bank of Canada firsts among its imagery. The most obvious is that it has four portraits and among them is a First Nations person. In fact, it’s the first time that anybody apart from a prime minister or royalty has been highlighted on one of our notes.

The portraits on this note are of parliamentarians. All of them can be considered nation builders who have contributed greatly to the growth and maturation of Canada. They come from different backgrounds and represent different eras. Only Sir George-Étienne Cartier and Sir John A. Macdonald are contemporaries. Still, although they were close partners in Confederation, their differing cultures brought some often contrasting issues to the table. These two represent a foundation stone of Canadian identity: a single nation forged from diverse peoples, building a unique culture.

The journey of Canadian identity hasn’t been easy and, over time, more cultures and many more points of view have found voice. Agnes Macphail, as the first woman member of Parliament (elected 1921), and James Gladstone (Akay-na-muka), as the earliest First Nations person appointed to the Senate (appointed 1958), represent those milestones of inclusion that promote the ever-encompassing unity of the Canadian peoples. 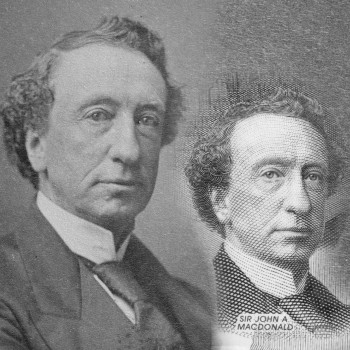 John A. Macdonald was one of the Fathers of Confederation and Canada’s first prime minister. Under his leadership, the nation was founded and expanded. 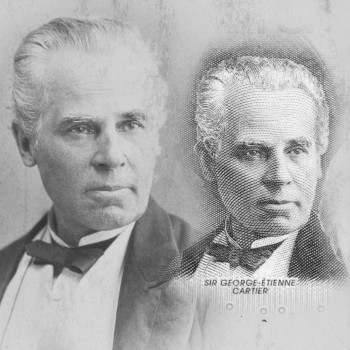 A Father of Confederation, George-Étienne Cartier viewed Confederation as a safeguard for French Canada and other minorities. 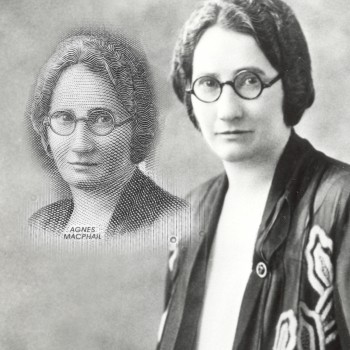 A human rights advocate, especially for women, Agnes Macphail was elected to Parliament in 1921—Canada’s first female Member of Parliament. 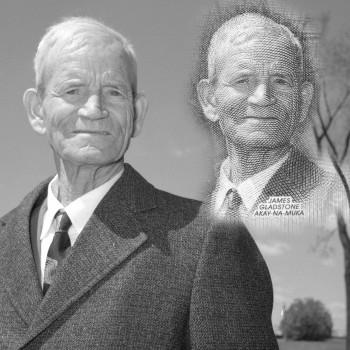 Committed to the betterment of Indigenous peoples, James Gladstone (Akay-na-muka) became a senator in 1958.

Thousands of Canadians took part in a public consultation about what sort of imagery and themes would, for them, best celebrate the sesquicentennial of Confederation. One thing that was very clear was Canadians’ interest in and their identity with the land. Regional identities run deep and the landscape is where they begin. You can imagine that no single image could represent Canada for a majority of its people. So, on the reverse is another first: a portrayal of multiple facets of the vast Canadian landscape. Five beautiful vignettes of major Canadian landscapes from coast to coast and to the North span the back of this note. Like the face of the note, diversity is the underlying theme of the back, for few countries can boast a landscape of such striking variety as Canada’s.

Like the most recent series of Bank of Canada notes, this note is rich with all sorts of symbolic details. I will leave those as well as the landscape imagery to another blog but, enquiring minds can check out the Bank of Canada website where they can find details on the stories behind the Canada 150 note. 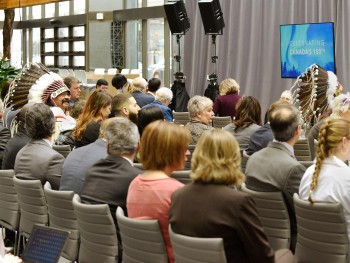 A good crowd and lots of media filled the Bank’s atrium to see the new bank note revealed. 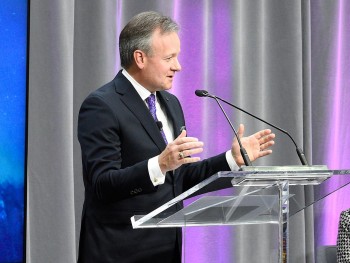 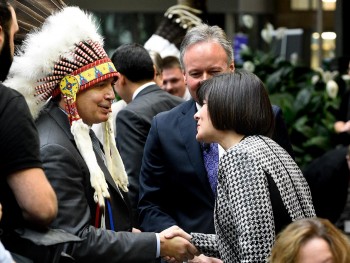 The bank note unveiling ceremony was brief and to the point. The substantial turnout included guests representing the regions featured on the back of the note, First Nations and Inuit leaders, and family members of James Gladstone and Kenojuak Ashevak (who created Owl’s Bouquet, shown in the clear window) as well as stakeholders from universities, government, museums and archives. Sitting quietly in the crowd was the ever-modest Jorge Peral of the Canadian Bank Note Company—the immensely talented engraver and art director who was lead designer on this note. 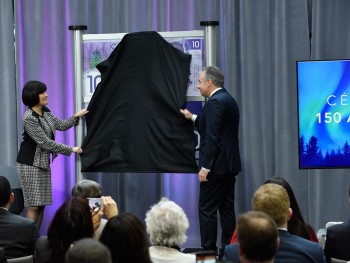 1,2,3…a perfectly synchronized pull! (and no rehearsal) 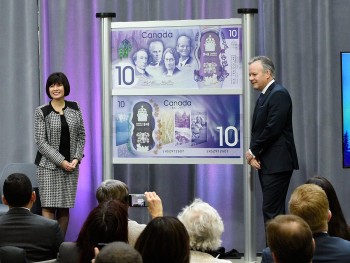 Keep in mind, of course, that the real bank note is much smaller.

The note was revealed by Bank of Canada Governor Stephen S. Poloz and the Honourable Ginette Petitpas Taylor, Parliamentary Secretary to the Minister of Finance. Ms. Petitpas Taylor spoke about the features and people on the face of the note while Governor Poloz described the process of developing this note and introduced us to the elements on its back. 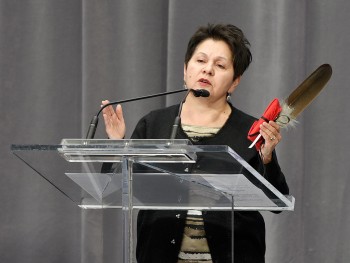 Claudette Commanda, a First Nations elder, gives an eloquent blessing to the event. 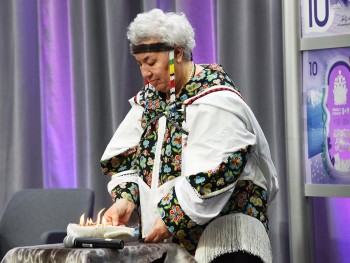 The Kudlik (Qulliq), the traditional Inuit oil lamp, is lit by Inuit Elder Manotik Thompson during her blessing ceremony.

Governor Poloz ended the official speeches by saying, “I hope this bank note captivates your imagination and instills pride in who we are and how far we have come as a nation. It celebrates our land, our history and our culture.”  Following the Governor were two blessing ceremonies performed by Inuit Elder Manotik Thompson and Algonquin Elder Claudette Commanda representing Canada’s Inuit and First Nations peoples. There was a substantial First Nations and Inuit presence at this ceremony, including Assembly of First Nations Chief Perry Bellegarde. It was apt. As Elder Thompson pointed out in her blessing, “We have made a very big statement with James Gladstone on there—to say that we are equal in Canada and we are moving forward with that relationship.” 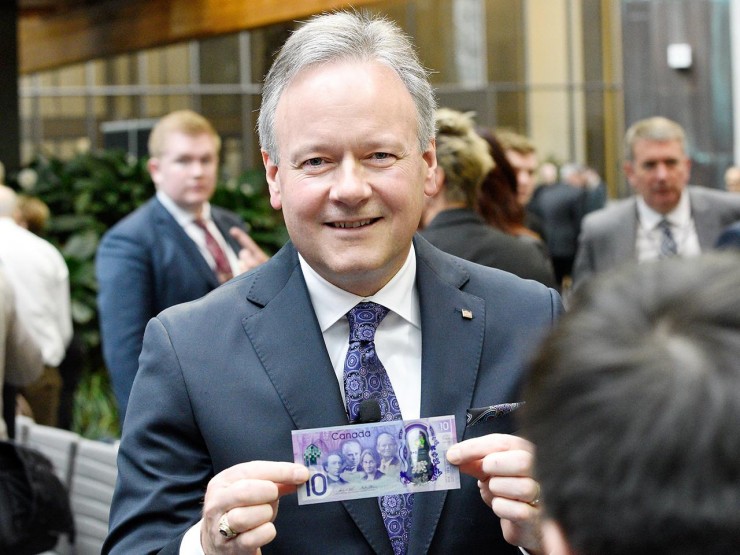 Uh, Governor, we need that back!

Have you ever seen eyes in the bark of trees? Wolves in the clouds? How about spooky things in bank notes?
Content Type(s): Blog Subject(s): Collection
October 2, 2018

The First War Loan included bonds in denominations of up to $100,000. They matured in ten years and paid interest at 5 percent.
Content Type(s): Blog Subject(s): Collection
October 1, 2018

What would you ask a curator? Your chance was September 12, when the annual Twitter event #AskACurator Day took place on computers, tablets and mobile phones all around the globe.
Content Type(s): Blog Subject(s): News & Events
August 30, 2018

A little grade 8 math revealed that, since our last full year of operation, we have increased Museum attendance by 91 per cent (pause while the audience claps).
Content Type(s): Blog Subject(s): News & Events
August 15, 2018

Death in the Ice

As the title suggests, this exhibition is more about the mystery surrounding the expedition’s fate than the expedition itself.
Content Type(s): Blog Subject(s): Reviews
July 25, 2018

The Canada Science and Technology Museum

A crowd of us from the Bank of Canada Museum took an afternoon to tour the CSTM and have a chat with some of its exhibition development team.
Content Type(s): Blog Subject(s): Reviews
July 11, 2018

We can handle around 350 people at once, so when we hit our maximum capacity, it looked like everybody on the Hill had dropped in for a little economic and numismatic education.
Content Type(s): Blog Subject(s): News & Events
June 22, 2018

FIDEM and Masters of Relief

FIDEM…exists to promote an appreciation for art medals, hosting shows internationally and providing a forum for the discussion and publication of relevant information.
Content Type(s): Blog Subject(s): News & Events
June 13, 2018

Dora’s work is as familiar as the change that jingles in your pocket. In all likelihood, you have come in contact with her work while using coinage to pay for your morning cup of coffee.
Content Type(s): Blog Subject(s): Collection
May 28, 2018

At first glance, you might wonder why a flower festival is a good fit for a money–themed museum. It’s worth a little history lesson to tell you why.
Content Type(s): Blog Subject(s): News & Events
May 16, 2018

Not Your Run-of-the-Mill School Visit

Operation Fish was the largest movement of physical wealth in history.
Content Type(s): Blog Subject(s): About Us