On 24 November, the finalists were announced in a Bank of Canada press release.

Who deserves to be immortalized on a Bank of Canada note? In the past, former prime ministers or members of the Royal Family were the portrait subjects of our notes. It was the tradition of the times, a sort of bank note default. Whoever you were, you were not likely to be a woman and if you were, certainly not of the people. But the times, they are a changin’. 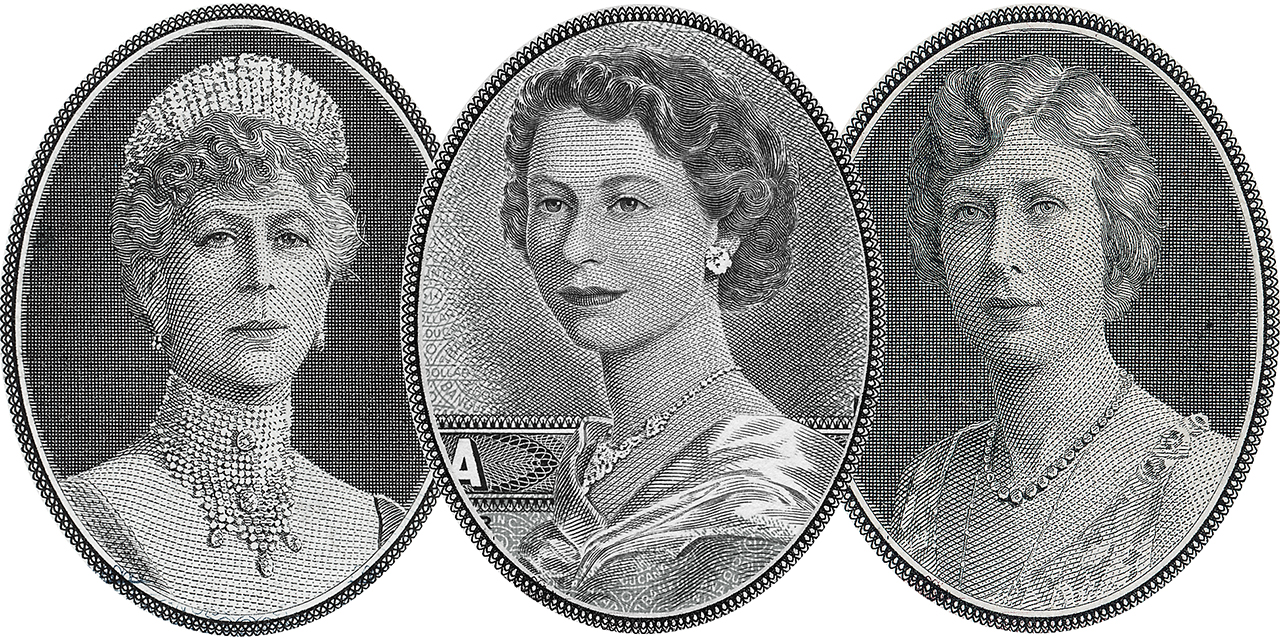 Queen Elizabeth, flanked by the only other women to appear on a Bank of Canada note, her grandmother Queen Mary and her aunt Princess Mary.

These days, central banks all over the world are featuring people other than mere heads of state or monarchs on their bank notes. Artists, humanitarians, social reformers, athletes and others whose achievements have been an inspiration to their fellow citizens are now popular subjects for printed currency. Naturally, many of these achievers are women. In March 2016, Prime Minister Justin Trudeau announced a search to discover who would be the first woman, other than royalty, to be the subject of a Bank of Canada bank note.

At this point, it’s worth revisiting the search process. Last spring, more than 26,000 people participated in the public consultation to nominate a “Bank NOTE-able Canadian Woman.”  This gratifying response yielded 461 unique and eligible women. An independent Advisory Council was convened to narrow this list to 12 and with the help of a public opinion survey and further research by historians, the list was boiled down to 5. Those 5 names were then further researched and tested with Canadians through focus groups. Finally, the short list was placed in the hands of Bank of Canada Governor Stephen Poloz to consult with the Minister of Finance Bill Morneau on a final choice.

Likely you are already aware that the short list of five candidates was revealed on 24 November and that one of them has now been chosen as the iconic Canadian woman to be the focus of one of our bank notes. But before I get to her, let me remind you of, in no particular order, the five women short-listed from the 461 eligible suggestions made by Canadians. 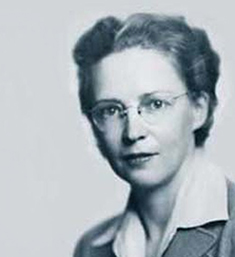 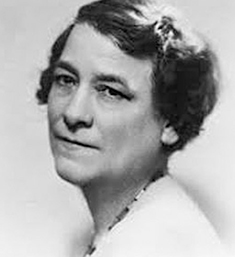 Idola Saint-Jean (1880-1945): a political and social activist who played a central role in achieving women’s suffrage in Quebec in 1940.
Photo: Library and Archives Canada 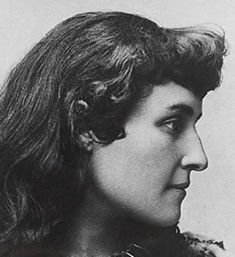 E. Pauline Johnson (Tekahionwake) (1861-1913): a renowned Anglo-Mohawk poet whose work reminds Canadians of the key role of Indigenous people in the development of our country.
Photo: Library and Archives Canada 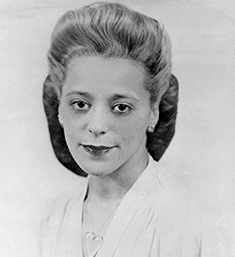 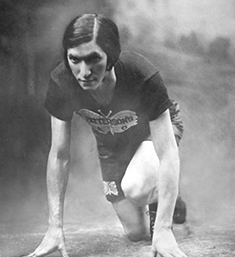 Any one of these women or, for that matter, any of the long list of 12, more than deserves to be on a bank note. However, we had to settle on one. In a ceremony that took place on 8 December in the Grand Hall of the Canadian Museum of History, Finance Minister Bill Morneau, accompanied by Governor Poloz and the Minister of Status of Women, Patricia Hajdu, revealed that Viola Desmond will be the featured portrait on a new $10 bank note, expected in late 2018. Viola truly exemplifies a Canadian who has overcome barriers, is inspirational to others, has made a positive change to society and in so doing, left a lasting legacy. I won’t retell Viola’s story here, but please visit the Bank’s website to learn all about her. 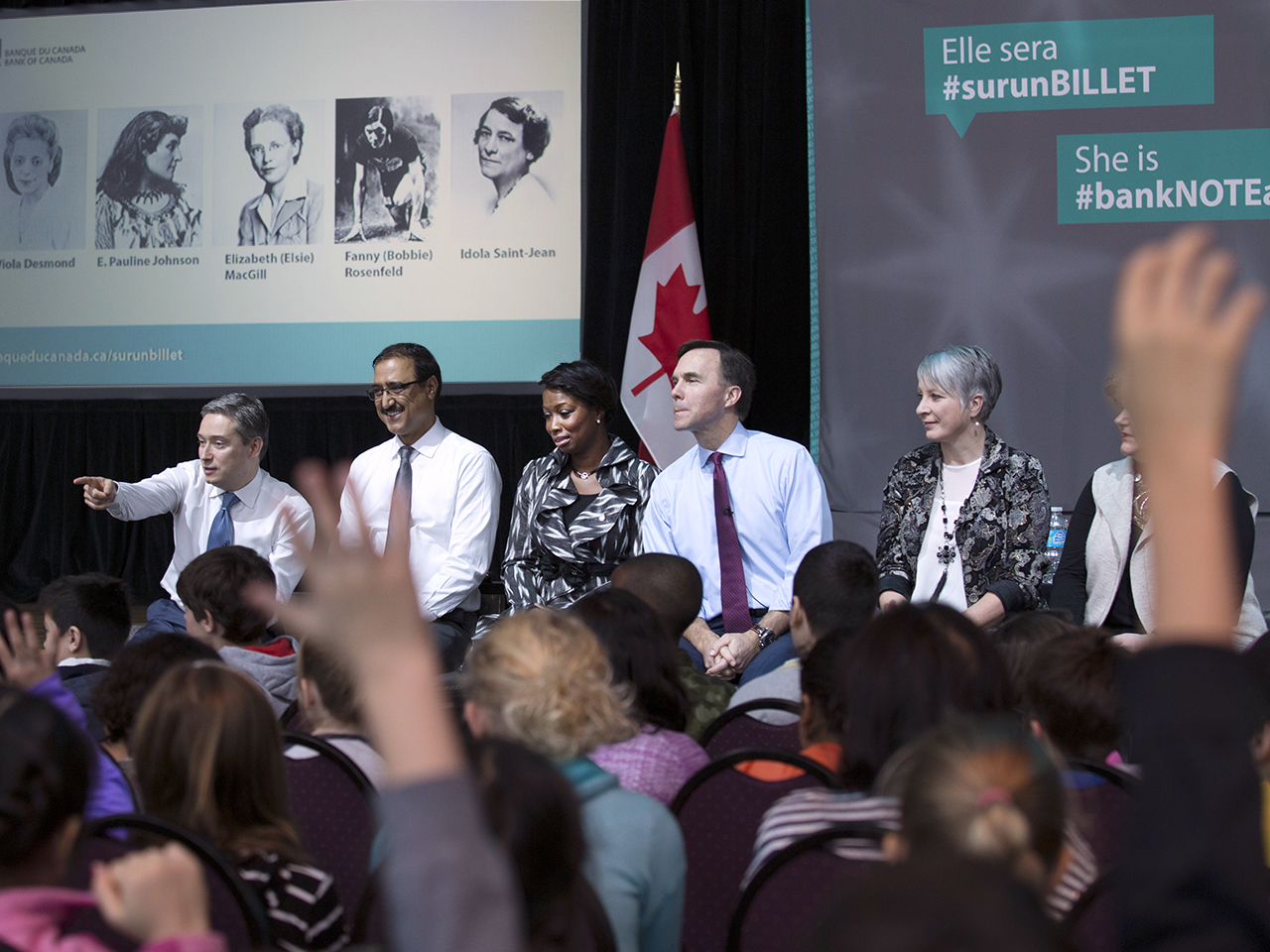 Dozens of kids wanted to ask the politicians about the choice of the first Canadian woman on a bank note. 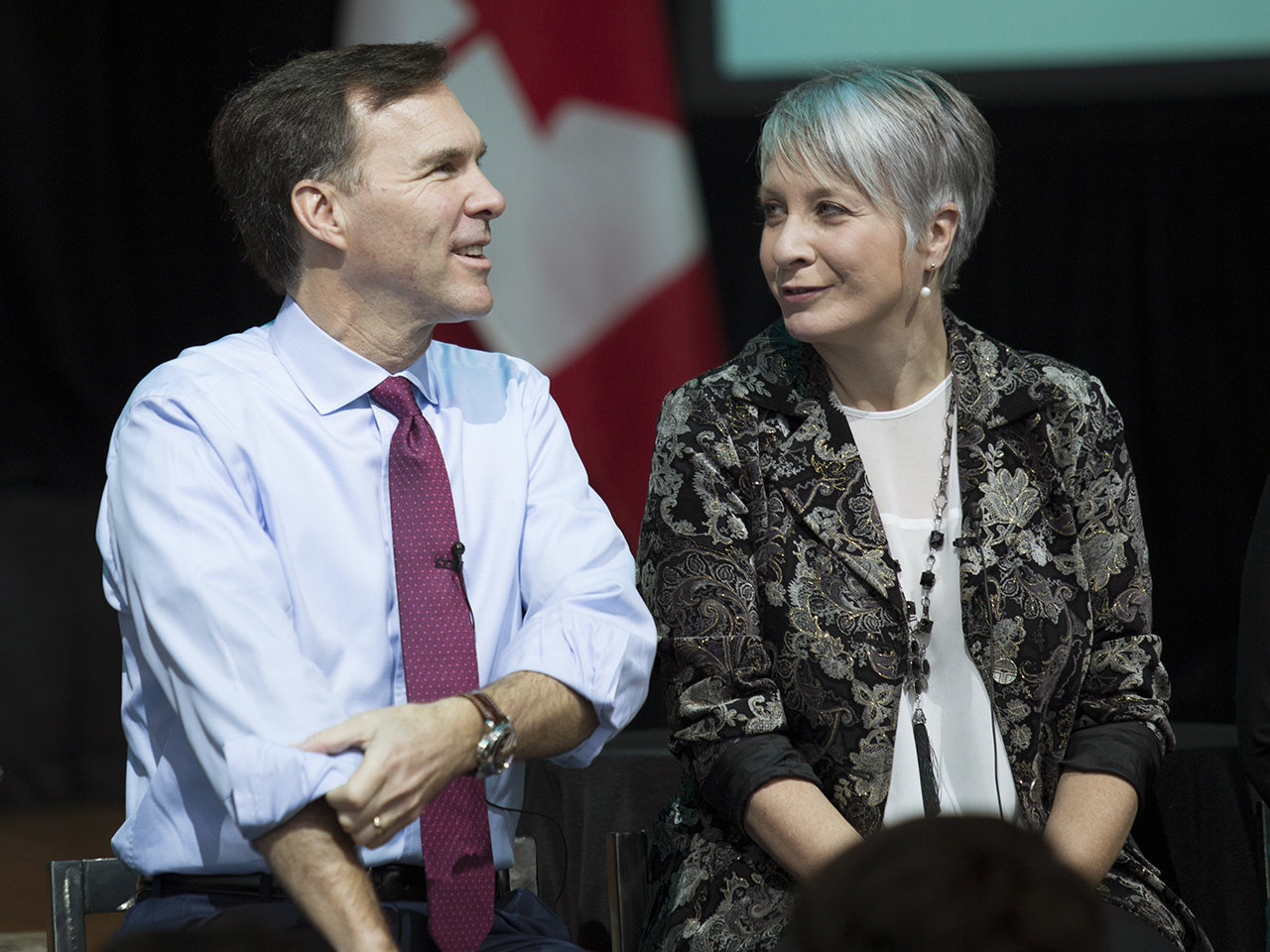 Finance Minister Bill Morneau prepares to take on some tough questions from some sharp 10-year-olds.

The day’s events got off to an early start with a Q and A session between federal government cabinet ministers and members of Parliament and students from Roberta Bondar Public School in Ottawa. The students asked some surprisingly direct questions, putting the assembled panel on the spot for some quick answers. After a roughly 30 minute exchange, moderator François-Phillipe Champagne, Parliamentary Secretary to the Minister of Finance, brought that part of the proceedings to a close. With a good-natured hubbub of camera people jockeying for position and MPs finding their seats, the official unveiling ceremony began.

(You can see the entire unveiling event on YouTube.) 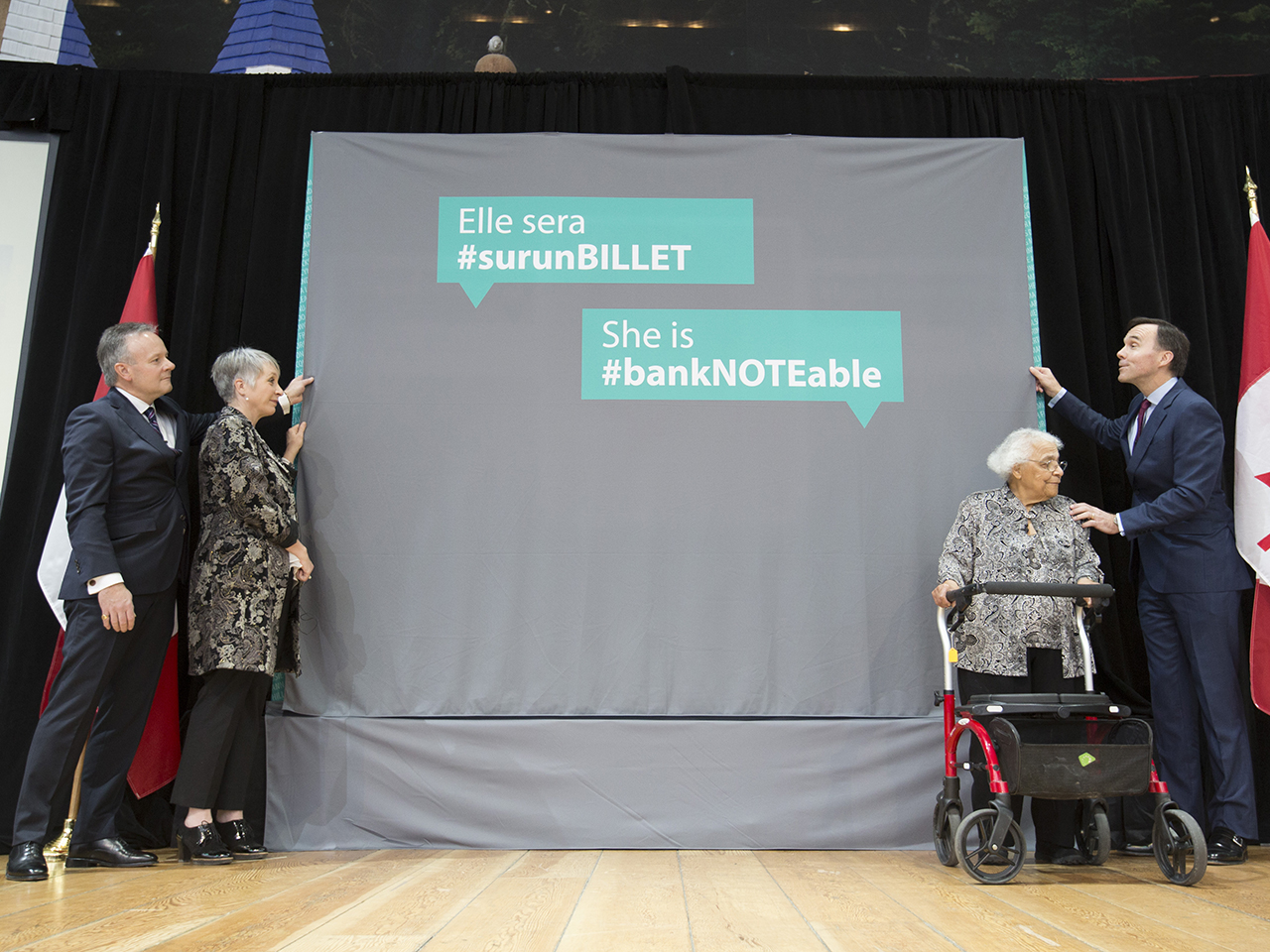 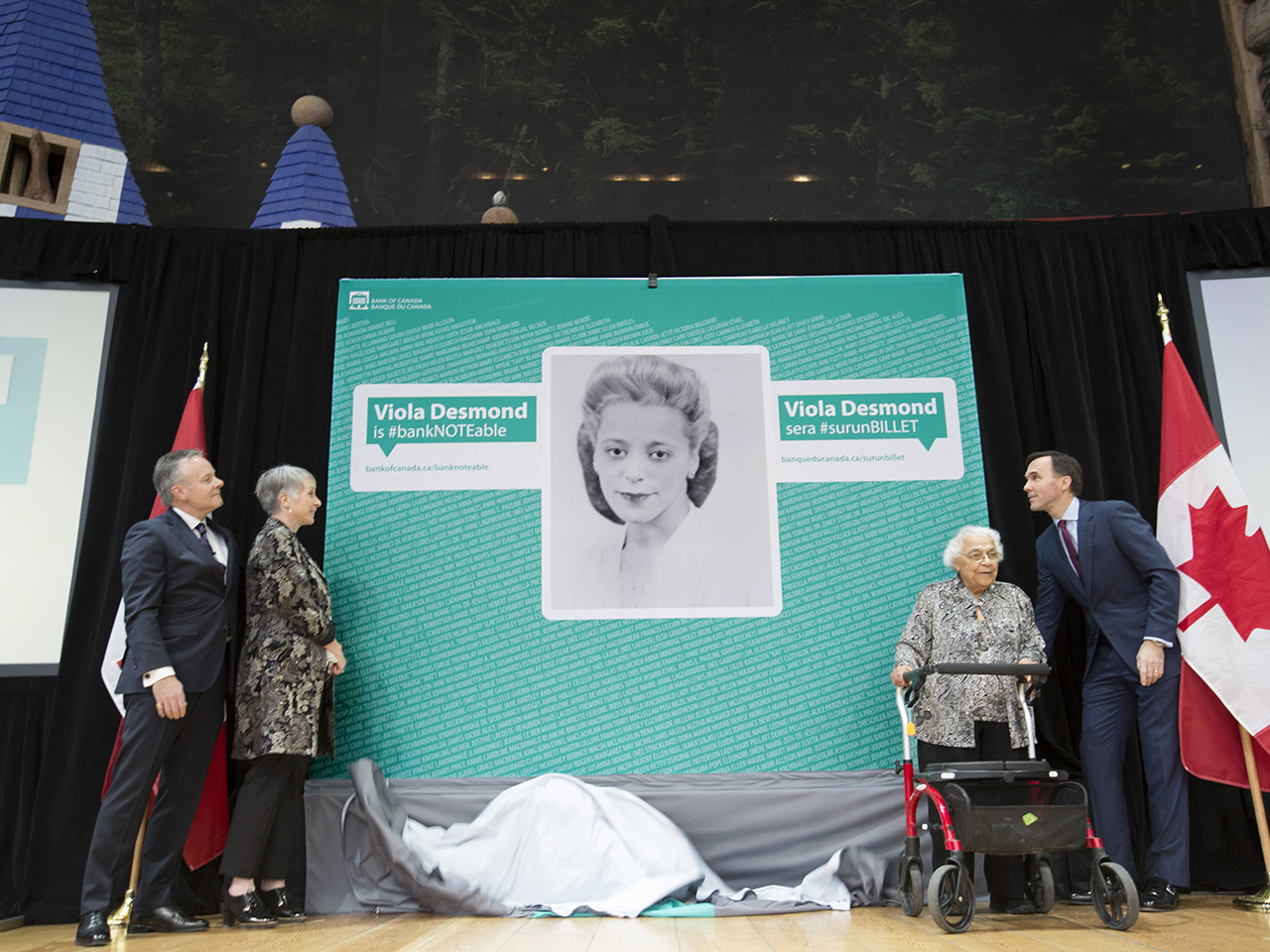 Bank of Canada Governor Stephen Poloz spoke first, describing the successful public consultation process that led to selection of the Bank NOTE-able woman. Minister Morneau followed, continuing to underline the great historical significance of the event for Canada, before introducing the morning’s special guest. From behind the wall of one of the Haida houses of the Grand Hall came a couple of helpful Bank Communications staff escorting an elegant lady in a stylish silver jacket. She was Wanda Robson, sister of our Bank NOTE-able woman. Minister Morneau gave a brief address and then, along with Governor Poloz and Minister Hajdu, pulled on the background banner. Suddenly there she was: Viola Desmond! There was a brief gasp, a buzzing of camera shutters and some long and loud applause. 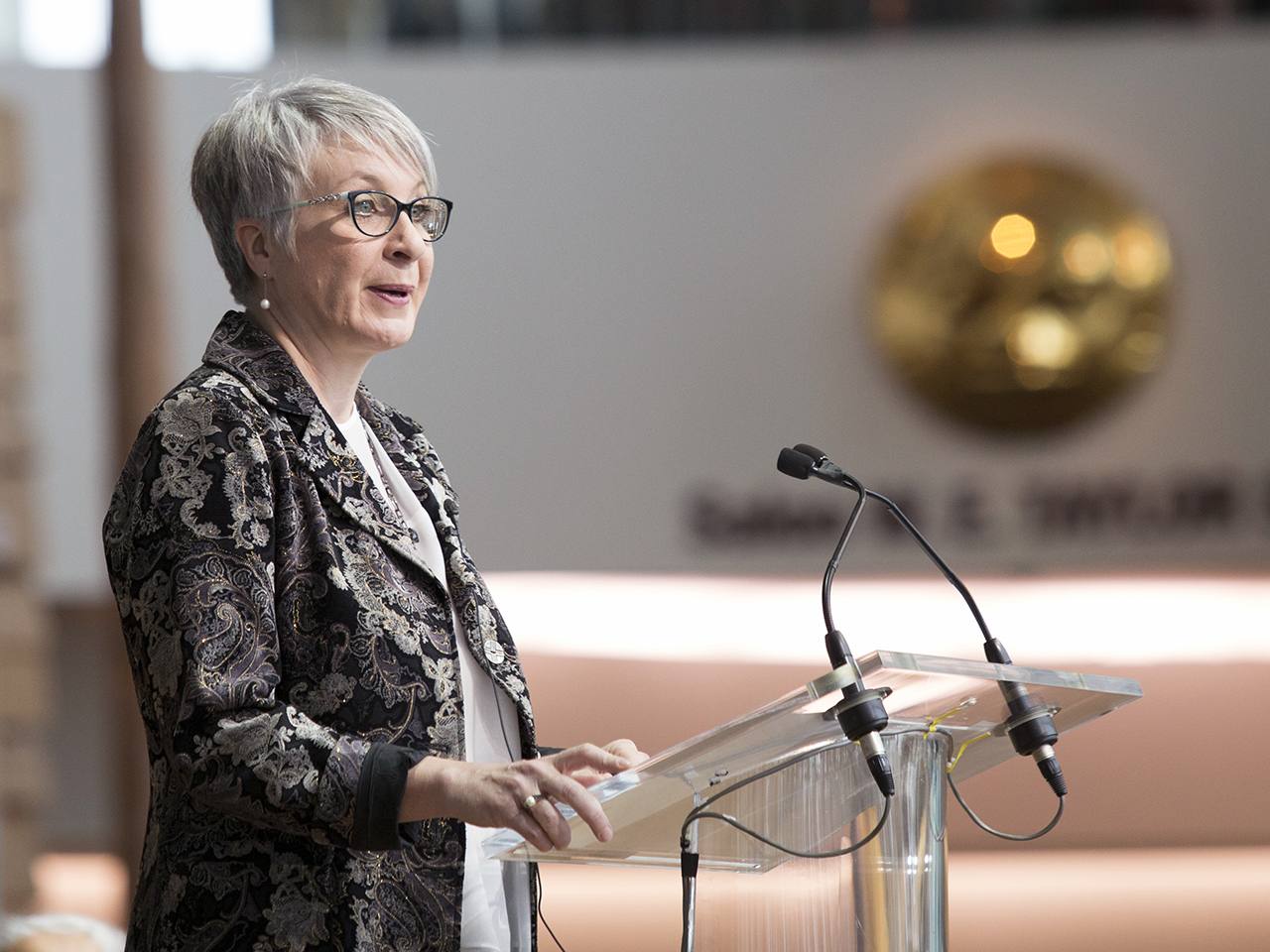 Minister of the Status of Women Patricia Hajdu gave an impassioned introduction to Wanda Robson.

Wanda Robson is a notable woman in her own right, having brought her sister’s story to the world with her book, Sister to Courage. Ms. Robson’s efforts to keep her in the public eye resulted in Viola Desmond’s public pardon in 2010. She really is an important part of Viola’s story. However, I don’t think any of us knew what to expect from the little lady in the silver jacket. It may have taken the help of a few hands to assist her across the stage and into her seat but as soon as Wanda Robson began speaking, it was clear that in all other ways, this was a very vigorous woman. In fact, we really lucked out with Wanda because she is both a relaxed public speaker and an accomplished storyteller. She charmed the audience almost immediately with personal memories of Viola, but it was when she deviated from her script that she was most captivating. She was clearly bursting with pride over her sister’s elevation to bank note status and even this reporter had a bit of a tear in his eye as she relayed her joy over the event. “I’d like to stay longer, but I have my orders,” Wanda told us and as she wound up her speech with thanks to her family, many of whom were in the audience. As she was escorted from the stage, there appeared a veritable scrum of people waving cameras, mobile phones and tablets wanting pictures of Wanda with her family and the various dignitaries. Viola Desmond may have been the focus of the event, but her little sister stole the show.

Wanda is a natural storyteller and speaks regularly about her sister.

I don’t think anybody would have any problem with the choice of Viola Desmond. She stands for the spirit of activism that, as Minister Hajdu said: “…is the force that allows us to make progress together as a society on difficult issues.” From this perspective, Desmond is a great choice—a choice that addresses negative aspects of our history while celebrating our ability to overcome them. 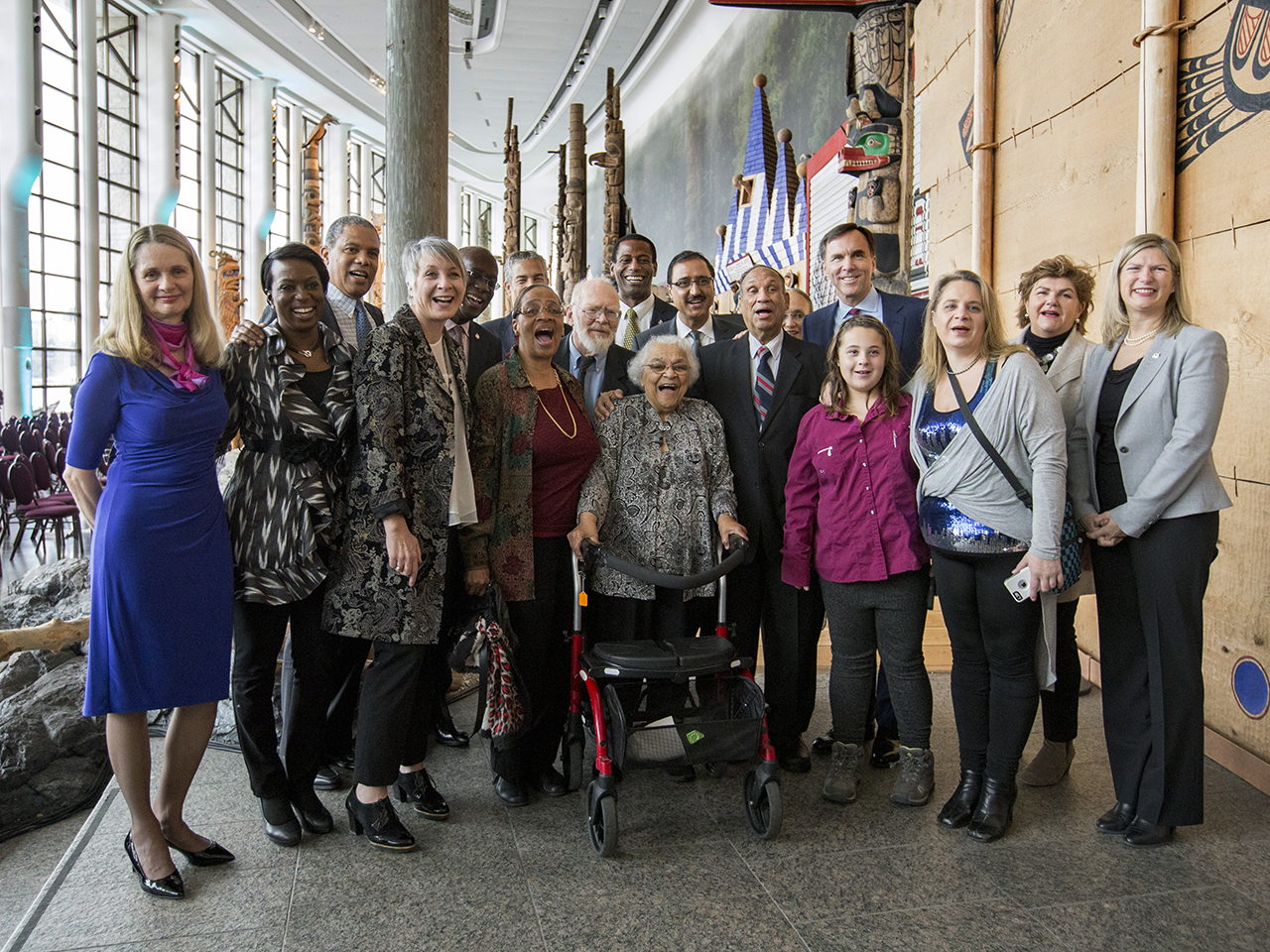 Robson with her family, members of the Advisory Council and dignitaries. The force behind the public campaign to put a woman on a bank note, Merna Forster, stands on the far left.