With over 100,000 artifacts in the National Currency Collection, it shouldn’t be surprising that some things are forgotten about. Take for example the “treasure troves,” coins that have been salvaged from shipwrecks. 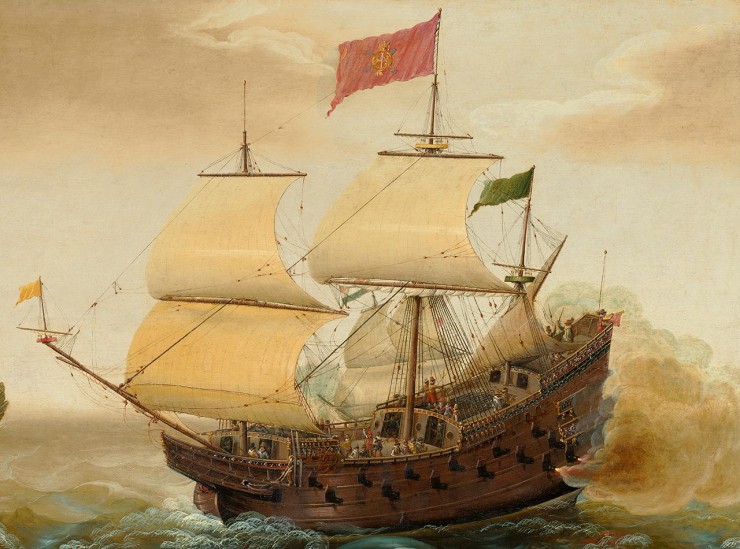 During the “Age of Discovery,” the likes of Christopher Columbus, Vasco da Gama, Amerigo Vespucci and Jacques Cartier petitioned the European rulers to back their voyages through unchartered waters in search of new trade routes to the Far East. There were thousands of shipwrecks. Most were Spanish galleons, loaded with gold and silver from Central and South America; perishing at sea due to treacherous weather, pirates and armed conflict. Over a 400-year span, Spaniards had been draining the American continents of their mineral wealth. It is estimated that there were over 32,000 trans-oceanic voyages in this era.

Many of the notable shipwrecks discovered to date have been found off the coast of Florida. During the late-summer hurricane season, the stretch of water along Florida’s east coast and out toward the open seas was notorious for claiming many ships. Even during the 1950s and 60s, the area, which became known famously as the Bermuda Triangle, was the site of the mysterious disappearance of many aircraft and ships. Sailing vessels leaving the Caribbean bound for Europe had to follow the Florida coast north to find the favourable trade winds to bring them east across the Atlantic Ocean. 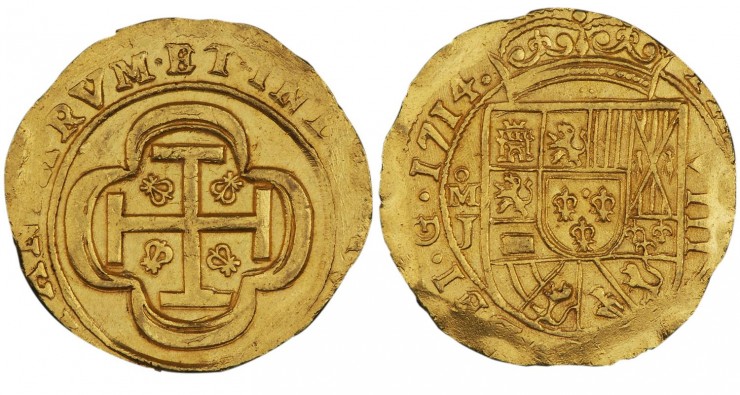 The coin featured above was salvaged from the so-called 1715 Treasure Fleet. It was in fact a combination of two fleets: one from Mexico and one from South America, totalling some 12 or 13 ships. The fleet was carrying over 1,000 people and 14 million pesos in coins (14 million dollars at the time). On June 30, 1715, off the east coast of Florida, the ships encountered a hurricane that destroyed the whole fleet. Hundreds of the crew and passengers were lost, along with the entire cargo of coinage. Modern salvage of the 1715 Fleet shipwreck began in the 1950s. Today, divers and salvagers continue to find coins from those wrecks. 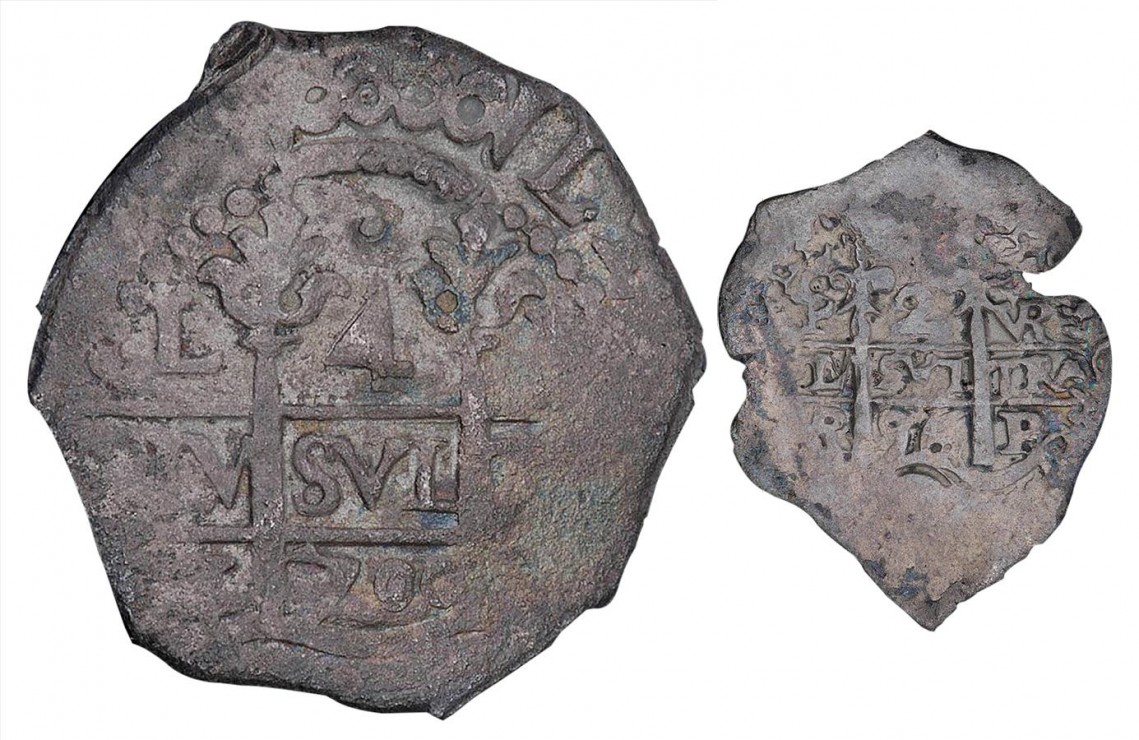 Canadian waters have also claimed their fair share of treasure ships. The HMS Feversham was a 32-gun British warship on its way from the Gulf of St Lawrence to New York with provisions and cash to assist the British campaign against the French (Queen Anne’s War, 1702–13). The Feversham, along with three other ships, sank off Scatarie Island near Louisbourg, Nova Scotia during a storm on October 7, 1711. Many souls perished in that storm and survivors bribed French fisherman to take them to New York. Attempts were made to salvage the wreck, but it lay untouched for centuries. Famous Canadian salvager Alex Storm’s diving team lifted the ships’ treasures in 1968. Subsequent searches of the wreck yielded more booty for fortunate divers. Below are a couple of Spanish cobs from that wreck. Spanish coins were so abundant and readily accepted, that it was not unusual to find them in the cache of a British ship. 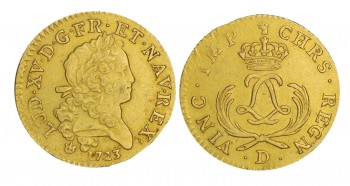 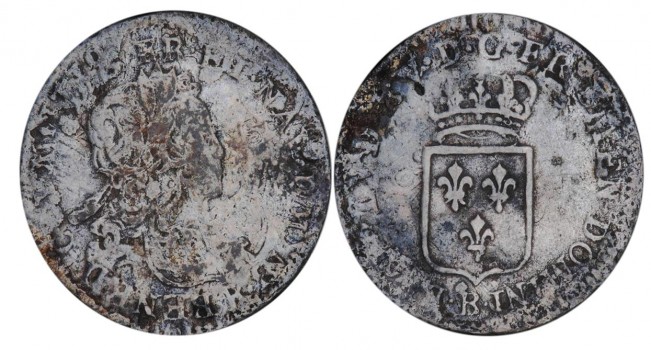 One of the better French ecus salvaged from Le Chameau. Compare it to the gold coin at left. (NCC.1976.82.2)

In 1725, the rocky shores of Cape Breton’s east coast claimed another ship when the French man‑of‑war Le Chameau, bound for Louisbourg, was caught in a storm and driven onto the rocks off the coast. On board was 80,000 livres (about $12,000 in 1725 dollars) of French gold and silver coins destined for Québec. It was the loss of ships like this that forced the Intendant of New France, who was responsible for the colony’s finances, to issue playing‑card money as a temporary measure to pay the troops until more coinage arrived. The wreck of Le Chameau was discovered in 1961 and a salvage expedition begun in 1965. The contents of the stricken ship were sold at auction in 1971. These French gold louis and silver ecu coins are from among a couple of hundred the National Currency Collection acquired at a sale. Over the years, salt water had severely damaged the silver coins, yet the gold coins have remained completely intact, proving the metal’s resilience and value. 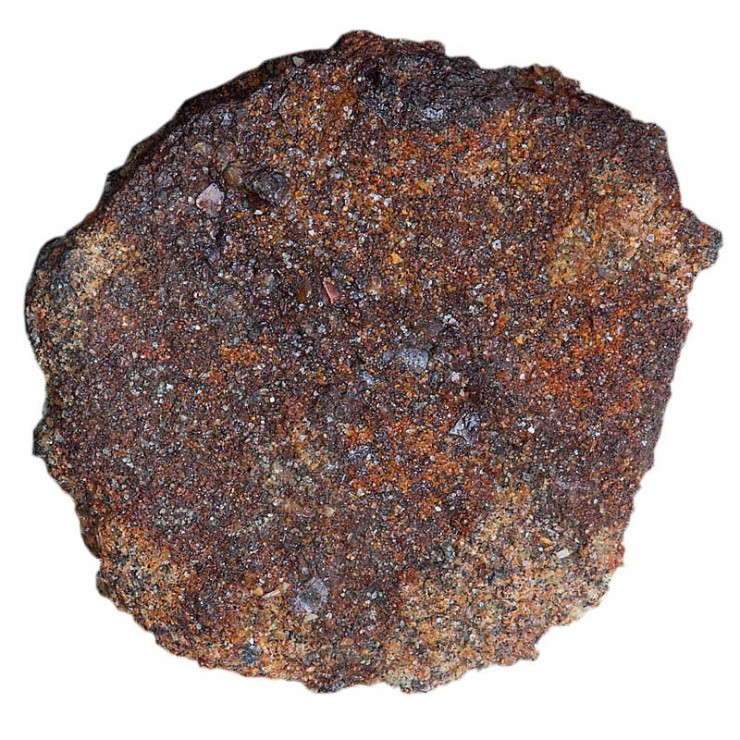 There have been thousands of shipwrecks, many of which, by any standards, carried enormous wealth. Treasure hunters have combed the beaches and oceans to uncover the rich treasures of gold and silver coins from the vast mines of Latin America or from European colonial powerhouses like France, Great Britain and the Netherlands. I would like to think that rediscovering the treasure trove coins in the National Currency Collection has been my own treasure hunt and that I can now share the wealth of knowledge about these fascinating coins with our curious and inquisitive visitors.