Until 2013, a large stone ring stood amongst the tropical foliage in the Garden Court of the Bank of Canada’s head office. It wasn’t a sculpture—it was a Yap stone, giant stone money from the island of Yap in the Federated States of Micronesia. Our Yap stone has been with the Bank for 38 years, longer than all but a handful of employees—12 at last count. I had been at the Currency Museum for barely three months myself before a flatbed truck, a huge crane and a dozen men in helmets and safety vests took the Yap stone away. For us, its removal from the Garden Court dramatically marked the Currency Museum’s closing. The big stone’s return now performs the opposite role for the new Bank of Canada Museum—heralding its opening. 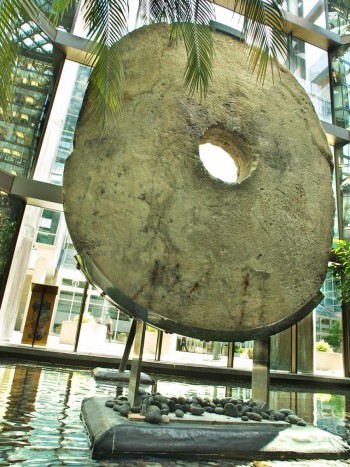 For nearly 40 years, our Yap stone stood in the Garden Court of the Bank’s Ottawa head office complex.

The stone is poised above the truck that would take it to Gatineau for its four-year sleep.

For those of you unfamiliar with our Yap stone, or for that matter, any Yap stone, below is the artifact’s exhibition label as it appears in the Museum.

This impressive stone disc is actually money from the Pacific island of Yap. “Rai,” as these stones are called, range from a few centimetres high to four metres high. This is the largest-known rai outside of Yap. It likely stood upright in the ground outside its first owner’s house. When traded, a rai did not move—it simply changed ownership. Rai were quarried on the island of Palau and taken to Yap on rafts, crossing 500 kilometres of open water. The difficulties of this journey contributed to the rai’s value. Although rai are still occasionally used for culturally significant exchanges, the official currency of Yap is now the US dollar—a somewhat more portable currency.

The Museum’s Yap stone is one of the few rai that actually did move (several times, as it happens) and on 3 June 2017, made what we hope will be its last journey for a very long time. It came home to the Bank.

In the last week of May, two of the great curtain windows were removed from the side of the Museum entrance pyramid to allow the Yap stone to be lowered onto its place: a small pedestal just below street level beside the stairs leading down to the Museum. When I arrived early on the Saturday morning of installation, the window frames had been removed but there was no sign of the stone. I quickly discovered that what was adequate clothing for a morning bicycle ride was inadequate for standing around waiting for a truck to arrive. Your stalwart correspondent then resorted to hopping around to maintain circulation until a big, red flatbed truck rumbled up to the curb. Occupying one half of the trailer was a tall, wooden crate: the guest of honour. On the other half was a curious machine: a cross between a crane and a forklift. It looked entirely inadequate for the task at hand, but proved itself admirably when it swung into action an hour later. First, though, the flatbed trailer did this amazingly graceful transformation. The bed split in half and the end section slid forward and tilted back while the wheels were pulled towards the truck. It wasn’t as if it turned into a giant robot on rollerblades, but the effect was pretty cool, nonetheless. After the crane rolled onto the sidewalk and the trailer returned to its regular shape, three or four burly men began pulling the crate and its supporting frame apart. And there it was, our Yap stone.

We couldn’t imagine how this funny contraption was going to do the job, but it turned out to be just the right machine. 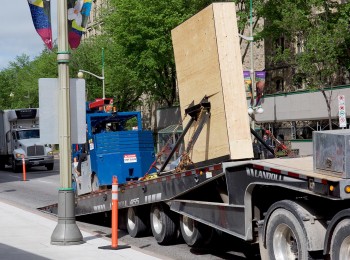 A number of us observed the flatbed trailer do this trick and I, for one, had to stop myself from applauding. 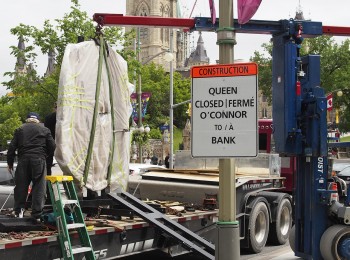 This was the first time our “rai” had seen daylight in four years. It remained wrapped up until the windows were replaced.

Although the big stone’s final placement was a subject of much debate, the entrance pyramid was always designed with the installation of the Yap stone in mind. Because of an awkwardly placed lamp post, however, the process of placing the stone had to be done in two stages. The crane couldn’t operate directly in front of the stone’s pedestal, so the stone had to be inserted through one frame of the window and temporarily placed on the top stair landing. Then the crane turned itself around and hooked up to the stone through the neighbouring window frame to allow the big disc to be swung into place without hitting any support columns. 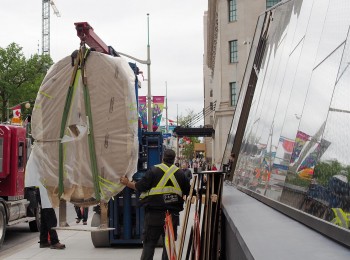 The crane gently lifted the stone from the truck and backed it carefully up Wellington Street. 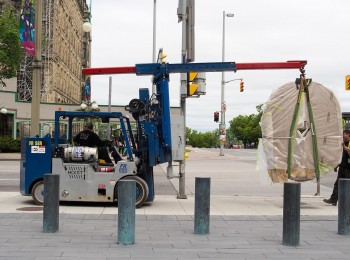 Having backed up Wellington Street, the crane did a slow u-turn and then backed down Wellington, returning to the windows. 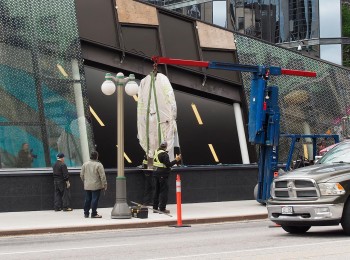 Because the lamppost is directly in line with the pedestal, the stone had to be inserted through the windows from the opposite angle. 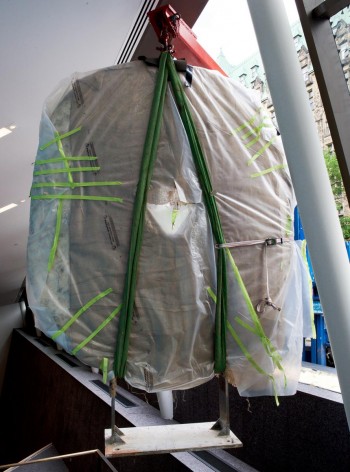 With only a little wiggle room, the stone was inserted ever so gently through the window. 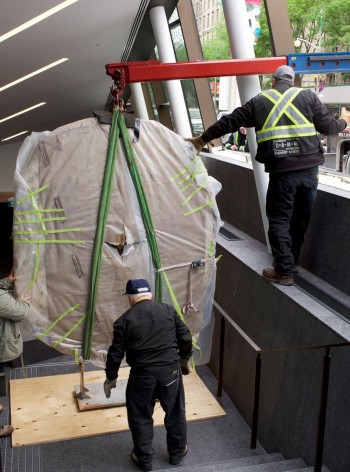 The stone was temporarily placed on the first landing of the Museum’s stair case and the crane unhooked. 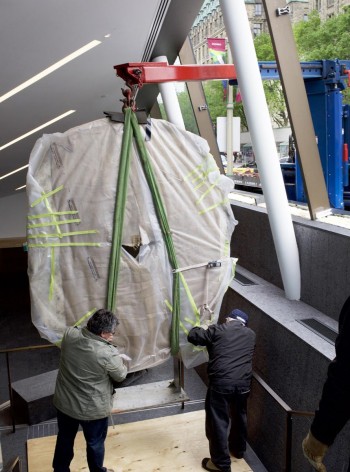 The stone was re-hooked to the crane and lifted for its final manoeuvre onto its pedestal. Note the crane has been moved to the far side of the window frame. 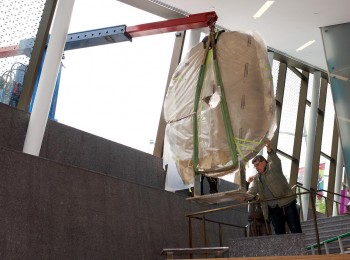 As the Yap stone is lifted over the stair railing to its pedestal, the top of the crane was roughly 15 centimetres from the ceiling.

Almost there! The stone was suspended millimetres from its pedestal as the securing bolts were inserted. 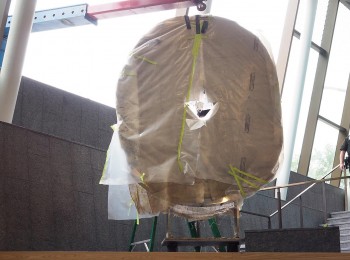 The stone will be strapped in place until the window frames and a proper supporting arm are installed. It will remain wrapped until this time.

So smooth and quick was the whole installation process, that a lot of planning had clearly gone into it. It appeared as if it had been rehearsed, in fact. As a spectator sport, it was worth getting up at 7:00 on a Saturday morning to watch. 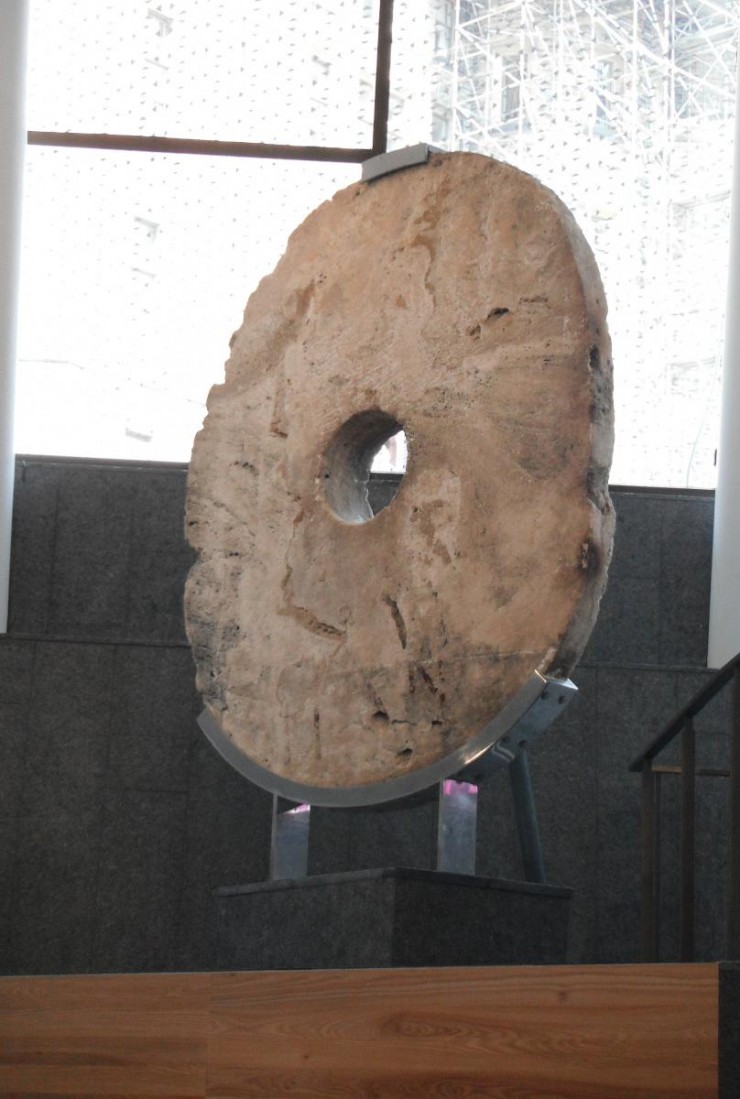 The Yap stone fixed in place, wrappers removed and ready to welcome visitors.

Like the robins of spring, the return of the Yap stone to the Bank heralds a new beginning: the opening of the new Bank of Canada Museum. The big stone disc has been placed at the top of the stairs as a sort of welcoming gate keeper that will again become as familiar as any Ottawa landmark. For us it is like the return of a long-lost friend.