The 66th annual convention of the Royal Canadian Numismatic Association (RCNA) is headed to wild rose country—and the Bank of Canada Museum has lined up some interesting activities for the event.

Every year, the RCNA convention is held in a different Canadian city. And every year, the Bank of Canada Museum participates—through displays, talks and meetings.

This year, Calgary, Alberta, will host the over 250 numismatists (currency specialists) and collecting enthusiasts who faithfully attend the convention. To showcase the incredible treasures in the National Currency Collection, our curators look for inspiration in the location of the venue. Calgary offers a great opportunity to display some less familiar pieces from a collection that is more than just coins and notes.

A glimpse into Alberta’s colourful, and sometimes difficult, monetary history

Alberta was a relative newcomer to Canadian Confederation, joining (along with Saskatchewan) in 1905. Neither the province nor its major urban centres of Calgary and Edmonton benefitted from an official—or even semi-official—currency before they joined Canada. So, developing a display for the convention was going to be a challenge—or so I thought!

But a few keyword searches in our trusty artifact database revealed over 1,400 objects from Alberta in the National Currency Collection. With so many good pieces to choose from, I had to narrow down the topics to keep the number of artifacts reasonable. I settled on an eclectic selection of topics—foreign coins circulating in Calgary; Depression era temporary relief currency; bonds, banking and bankruptcies; and commercial tokens from A to (almost) Z.

From “Straits” coins in Calgary…

A newspaper clipping from the Calgary Herald talks about the “tabooing” of Straits coins in circulation in Calgary. This means making them unacceptable or restricted in society. Calgary Herald, March 3, 1906

At a time when the West was just getting over the fever of the Fraser Valley (1858) and Klondike (1896) gold rushes, people, understandably, preferred coins to paper money. Coins were in short supply in the Prairies, and it was a challenge to find good ones. Until joining Confederation, Albertans relied mainly on the chartered banks to get cash, contending with a hodge-podge of Canadian, American and foreign coins—often well worn, mutilated or counterfeit.

As early as 1897, there were accounts of silver coins from British colonies in Asia being dumped into the Vancouver market at full face value—only to be redeemed by banks at less than half their value. They came from such places as Ceylon (Sri Lanka), India, Hong Kong and the Straits Settlements (Malaysia and Singapore). Their poor quality, plus the trouble of shipping them home to redeem them, prompted the banks to devalue the coins. It wasn’t long before the rest of Canada was dealing with the problem of foreign coins infiltrating cash registers, pockets and purses.

In early 1906, newspapers were reporting problems of foreign silver coins in circulation. Enterprising people were buying up Straits Settlements coins in Vancouver at half price and bringing them to Calgary—where they were accepted at face value. Calgarians were shocked to learn that Straits coins contained less silver than Canadian coins and were being accepted at the banks at a steep discount. Anywhere between $10,000 and $20,000 in Straits coins were circulating in Calgary, representing a significant portion of the local economy. By the beginning of March 1906, Calgary merchants were accepting Straits coins at only half their value, and soon the coins disappeared from circulation.

…to Alberta banks in dire straits

Banking was late in coming to Alberta. The Bank of Montreal and the Imperial Bank of Canada opened their first branches in Calgary in 1886. By the 1920s, all the major banks had set up shop in the cities and towns of the province. In 1975, a couple of Alberta banking upstarts—the Northland Bank and the Canadian Commercial Bank (CCB)—were enjoying some financial success, investing heavily in oil, gas and real estate loans. But the economic recession and high interest rates of the early 1980s opened chinks in the armour of the oil and gas sector, and both banks went bankrupt.

On Labour Day weekend in 1985, the minister of finance issued a statement that the Northland and CCB were no longer viable, and their operations would cease immediately. The larger banks absorbed the assets of the two defunct banks, and customers kept their deposits. The real losers were the shareholders of the banks, whose stock was suspended on the Toronto Stock Exchange on September 4, 1985. These were the last bank failures in Canada. 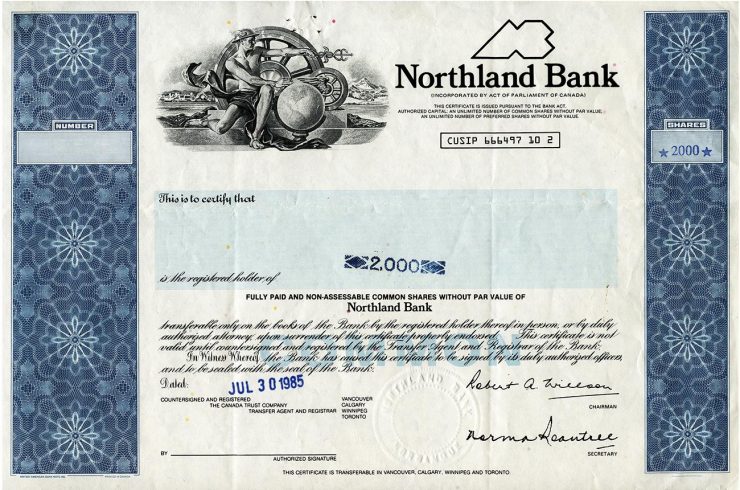 Shareholders in the Northland Bank probably assumed that investing in a bank was a safe bet. 2,000 shares, stock certificate, Northland Bank, Canada, 1985

Find a token from your hometown

Between 1880 and 1965, small businesses from hundreds of cities and towns across Canada issued tokens to promote their businesses and improve customer loyalty and service. There are nearly 6,000 commercial tokens in the National Currency Collection. Of different sizes, shapes and materials, tokens were used to buy almost everything: from a loaf of bread to a car wash. Out of the 375 Alberta commercial tokens in the collection, I selected at least one token from every Alberta city or town—covering the alphabet from Athabasca to Youngstown (because Zama City didn’t have a token). May I point out that there are no Alberta municipalities beginning with Q, U or X, either!

A car wash token from Jasper, a bread token from Medicine Hat and a radio token from Red Deer: just a sampling of the many tokens issued by merchants and businesses across Alberta. Tokens: 1 car wash, Jasper, around 1960; 1 loaf of bread, Medicine Hat, around 1885; 1 hour of radio play, Red Deer, around 1940

My research into Alberta numismatics has proved yet again that when money is scarce, Canadians dig deep into their bag of financial tricks to overcome adversity, stimulate trade and strive for prosperity. If you happen to be in Calgary between July 16 and 20, then come to the RCNA convention. You’ll find many dealers and collectors on hand to share their passion for numismatics. And you’ll discover more of the fascinating stories that Canadian and world currencies have to tell.

In 1977, the Royal Canadian Mint wanted to reduce the size of the penny in response to the rising price of copper. Little did the Mint know that the Toronto Transit Commission’s reaction would force the cancellation of the program.
Content Type(s): Blog Subject(s): Collection