The Adventure of Exhibit Planning VII


Visiting the fabrication facility for Voices from the Engraver

An exhibition fabrication company has been selected by the Museum to produce the upcoming Voices from the Engraver travelling exhibition. It’s all very exciting. The vendor that won the contract, best fitting our budget and requirements, is the exhibition services department of the Musée de la nature et des sciences de Sherbrooke (Sherbrooke Nature and Science Museum) located – you guessed it – in the scenic Eastern Townships city of Sherbrooke, Québec.

The 130-year-old museum, which is part of the Séminaire Saint-Charles-Borromée, has grown from a small natural history collection to a progressive life sciences education advocate with a modern facility and a collection of 65,000 objects. By the mid-1990s, the Musée de la nature et des sciences de Sherbrooke (MNSS) had begun to build a reputation for travelling exhibitions and had established its own facility for producing them. Now they create exhibitions for other museums as well as their own. In early July, after an initial meeting, Designer Matt Paquette, Conservator Patricia Measures and Project Manager Louise-Anne Laroche went on a road trip to Sherbrooke to take a look at some prototypes and hear some ideas the MNSS had to offer for our exhibition.

A sample of direct printing process allowing type to be printed onto wood. 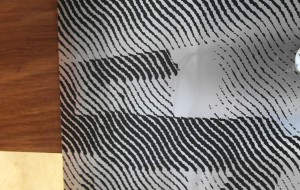 Sample of a similar direct-to-surface printing onto aluminum. 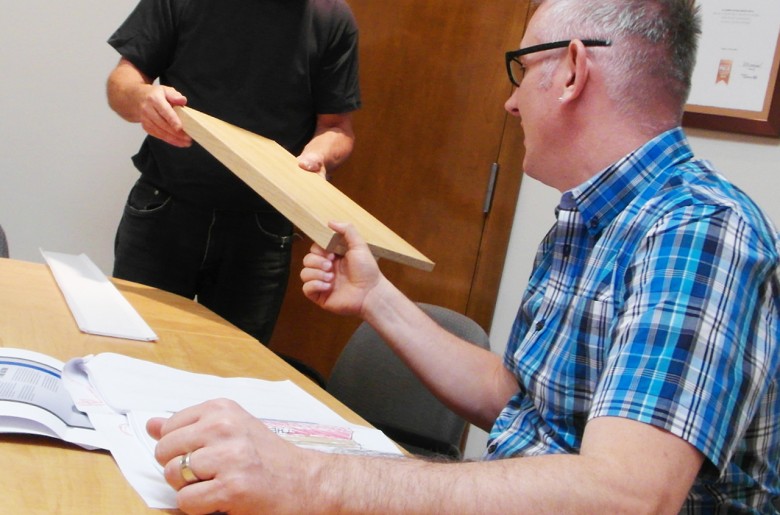 Matt inspects a section of wood support produced by Gilles, a carpenter in the exhibition fabrication department.

The MNSS produced a collection of prototypes of all of our proposed mounting systems, signage, printing and hardware. Some of Matt’s ideas for printing directly onto metal and wood were realized beautifully, with successful samples showing both mediums. Each of the tall exhibit units had been planned with bright, 3-D graphic titles in plastic running down the panel edges like old-fashioned neon signs. These had a lot of impact when the actual samples were seen. Of particular interest to Patricia were the individual cases for the artifacts. As hoped, they are exquisite and will both display and protect the artifacts. 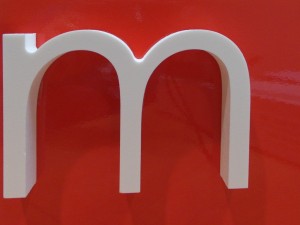 A 3-D letter sample for the signage that will run vertically up the zone introductory panels. 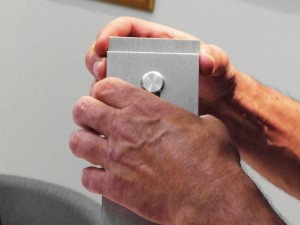 Matt holds one of the heavy-duty hardware units that hold the panels together.

For one of our interactives, we decided on our own version of the old Spirograph® game, one that would demonstrate for kids how the old geometric lathe machines were used to produce the complicated loop-and-swirl patterns on earlier bank notes. The challenge was to make it robust and with no movable parts. Though the prototype was somewhat rough around the edges (the wheels had been hand cut, not machine cut), we think their solution is a very good one and will work well. 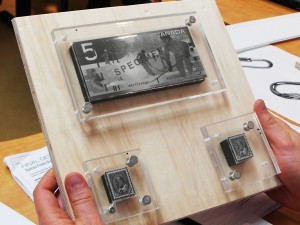 The individual acrylic “sandwich” cases for the artifacts – easily removed and self-contained.

Matt, Patricia and Louise-Anne also met with the team from Multimages (computer interactive developers) and with Luc Lapointe, a software specialist. Dreams and ideas were exchanged about the timeline interactive unit and especially the exciting “Make your own bank note or stamp” interactive touch screen and photo booth unit. More about that soon.

In all, the team returned feeling confident about our progress with Voices from the Engraver and about our relationship with our fabricators. There is still much to do, but we are very pleased with the prototypes and have every confidence in the exhibition’s success.