It should be no surprise to anybody that the people who promoted a universal language are the same people who attempted to create a universal currency. In the 1870s and ’80s, Dr. Ludovic Lazarus Zamenhof, an ophthalmologist from Bialystok, Poland, developed Esperanto, a language described as an “international auxiliary language” that would bridge cultures. Bialystok was an ethnically divided part of imperialist Russia, and Dr. Zamenhof grew up feeling that the enmity and conflict in his community were rooted in the differing languages of the various cultures there.

Esperanto very quickly developed a serious following. A textbook of Esperanto grammar appeared in 1887, and the first congress of Esperanto speakers was held in France in 1905. But after the First World War, Esperanto was viewed with suspicion by most of Europe’s burgeoning totalitarian regimes. Esperantists were often persecuted, expelled or even executed, but they still met in secret. 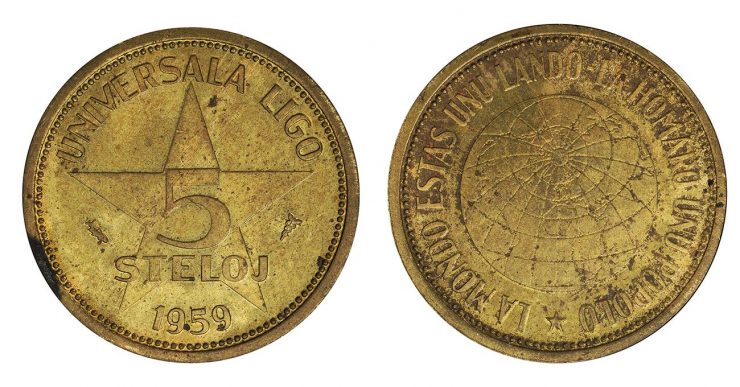 Not until after the Second World War was an Esperanto movement openly revived, with the creation of a Dutch organization called the Universala Ligo (Universal League). The League’s mission was to unite mankind through the use of a common language. During the first international assembly of the Ligo in 1946, a decision was made to introduce a common world currency with an internationally stable value. The League’s hope was to achieve peace through international economics—that global conflicts caused by international economic pressures could be resolved by using this revolutionary currency. This noble task would fall upon the “stelo” (Esperanto for “star”) and its value was determined as 1 stelo = 1 standard loaf of bread, which at the time cost 0.25 Dutch guilders. 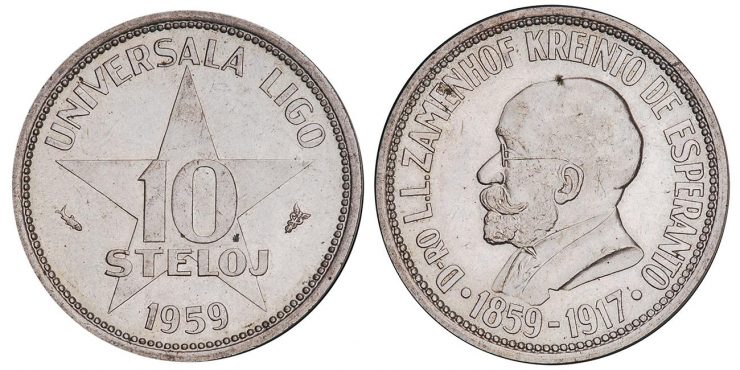 The Universal League emerged from a secret association of Esperanto speakers who met in the Netherlands during the Nazi occupation.

The first coins were minted in 1960. Through 1965, successive issues produced 1, 5, 10 and 25 steloj denominations. They actually circulated—but not with the support of any government. Steloj functioned for over 30 years as token coinage used to purchase books and other items within the Netherlands’ chapter of the Ligo. In 1974 the stelo was revalued at 0.50 Dutch guilders. With the hope of cushioning it from inflation, the stelo was later pegged to the consumer price index, a tool for measuring inflation based on the prices of basic consumer goods. But fierce internal disputes over how it should be valued brought about the demise of the currency. The Universala Ligo disbanded in 1993 and, in the late 1990s, the deaths of its greatest advocates ended any major Esperanto initiatives.

Notes from the Collection: A Buying Trip to Toronto

Recently, from October 3 to 5th, collections staff were at the Toronto Coin Expo, held at the Toronto Reference Library on Yonge Street. The show boasts informative lectures, a large auction of coins, tokens and paper money as well as a showroom, called a bourse, where dealers greet clients and buy and sell material.
Content Type(s): Blog Subject(s): Reviews
November 12, 2013

The Last of the New Polymer Notes are Released

On 7 November, the Bank of Canada released the new five and ten dollar bills into circulation. I won’t say ‘released onto an unsuspecting public’ as the official introduction to the new bills took place last April in a big event in front of the former Museum featuring a live presentation by Chris Hadfield beamed from the International Space Station.
Content Type(s): Blog Subject(s): News & Events
November 5, 2013

Twice this past July, members of the museum planning team took the train to Montréal to have a look at some of the excellent museums there.
Content Type(s): Blog Subject(s): Reviews
October 28, 2013

Director’s chair : A little help from our friends


In one of my favourite cinematic moments, the 11 year-old chess prodigy, Josh Waitzkin, imagines sweeping the pieces off a chess board in order to help him think more clearly about an important game of chess. It is a championship game and he is on the brink of winning it all.
Content Type(s): Blog Subject(s): About Us
October 7, 2013

The Cases are Almost Empty

For the first time since they went into their cases in 1980, over 2000 coins, notes, beads and shells are coming back out. The Museum’s curatorial staff are busily pulling panels from cases, placing coins into specially prepared drawers and sliding notes into acid-free Mylar envelopes.
Content Type(s): Blog Subject(s): Collection
September 24, 2013

The doors were barely closed following Big Top Farewell event before Chief Curator Paul Berry and his team began emptying display cases that had been sealed shut since 1980. The biggest task involved removing more than 2500 bank notes from the room we knew as Gallery 8.
Content Type(s): Blog Subject(s): Collection
September 16, 2013

Another convention of the Royal Canadian Numismatic Association (RCNA) wrapped up in July. This year the convention was held in Winnipeg, Manitoba. It was the first time in over thirty years that the RCNA Convention made a stop there.
Content Type(s): Blog Subject(s): Reviews
September 6, 2013

First Artifacts to Leave the Museum: And they were big

Before the museum closed for renovations on 2 July, technicians began to remove the heavier artifacts in late May. First to go was the strong box. Built of ¼” thick welded steel plates, this trunk was used by the Bank of Upper Canada in Toronto between 1821 and 1866.
Content Type(s): Blog Subject(s): Collection
August 30, 2013


Most of us know the first part of Alexander Graham Bell’s take on opportunity: “When one door closes, another one opens…” What we often don’t recall is the second half of that quote, where he says: “…but we so often look so long and regretfully upon the closed door, that we do not see the ones which open for us.”
Content Type(s): Blog Subject(s): About Us