Gold Rush! and Mining the Miners 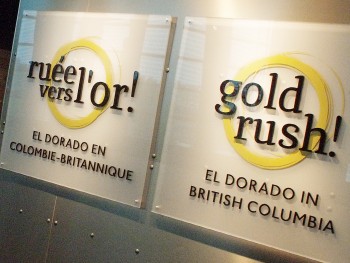 Gold Rush! Involves not just one but a number of gold rushes in BC and internationally (but not the Klondike). 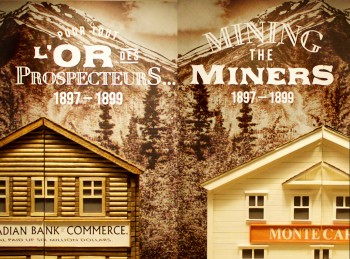 Mining the Miners deals with a small facet of only one gold rush, the Klondike. But it’s a pretty interesting facet!

When we sat down to discuss the subject of our next exhibition to be hosted by the Canadian Museum of History (CMH), there were two topics tabled: money in the Red River Settlement of Manitoba and the Klondike gold rush. As the CMH would be hosting Gold Rush! El Dorado in British Columbia (a Royal BC Museum exhibition) this summer, it was a short discussion. Mining the Miners is our third temporary exhibition at the CMH (we reopen in 2017) and it is indeed about the Klondike gold rush. It’s always nice to be able to dovetail our exhibits with those of our host.

The real thing. A near-pure gold ingot from the Royal Canadian Mint. At a rough estimate: 30 cm long and 20 kilograms. 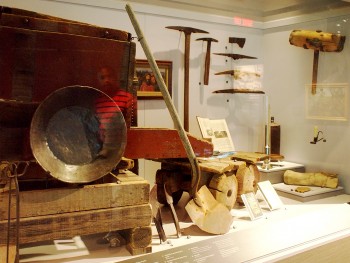 All the basic tools for a 19th century gold miner: spade, picks, pan and a rocker box to separate gold from gravel and sand.

Gold Rush! has the practical aspects of frontier prospecting and mining covered, providing background material for the stuff that really tickles our fancy: banking and the economy! The Dawson economy? That sounds like a real snore, but it’s actually an extraordinary story full of the same sort of crazy anecdotes and outrageous statistics that sprout like mushrooms out of any gold rush. We called our new exhibition Mining the Miners. But let’s get back to Gold Rush!

Interpreting the harsh experiences and primitive technologies of the gold rush prospectors would be enough for any big exhibition. Fortunately, the Royal BC Museum also chose to look at the collateral effects of a gold rush—for better and for worse. At the core of this exhibition is the powerful notion that the various BC gold rushes were as responsible for shaping the Canadian West as the railway was, perhaps more. Also central to the exhibition is the ancient and powerful effect that gold has on the human mind, an effect that builds economies and nations while devastating cultures and landscapes. There isn’t a lot of happy history associated with gold—it tends not to bring out the best in people­—but it’s fascinating history. 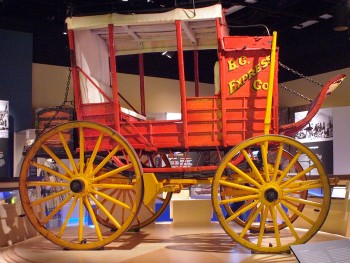 Stage coach used on the Cariboo Road through the Fraser River Valley.

Surveying equipment (c.1855) used by British Royal Engineers to help build the Cariboo Road from Yale to Barkerville, BC.

As the prospectors stampeded for the gold fields, close on their heels was a whole host of frontier opportunists. Roads needed to be surveyed, transport provided, supplies delivered, infrastructure built, political frameworks put in place and eventually, every aspect of a functioning community conjured up out of the woods and creeks—at least temporarily. Vice, virtue and taxes all quickly appeared in unequal measures.

In the gold pans in front of the case are the buttons to open the building facades.

And this is where Mining the Miners picks up the story. We expanded our initial storyline from a tale of the frontier banks to the crazy economics of a remote boomtown; of trying to live and prosper in a place where the most modest of needs had to be hauled in over hundreds of kilometres of trails and lakes and down the Yukon River into a punishingly harsh environment. It was an economy driven by greed and opportunism where the middleman triumphed and the vast majority of miners lost. 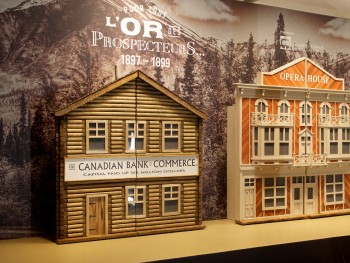 The Opera House on the right still stands today in Dawson and is now named the Grand Palace Theatre.

The Bank of British North America was later bought out by the Bank of Montreal.

For this exhibition, we wanted a fun visual catch and our exhibition designer had a great idea: build a diorama of Klondike building facades that open up to reveal our text panels. And we did. Four facades, all modeled after real Dawson buildings, were built to house our panels. Arranged as if on a street, the buildings open at the touch of a button. Detailed right down to the wood grain, signage and roof shingles, they are very compelling. 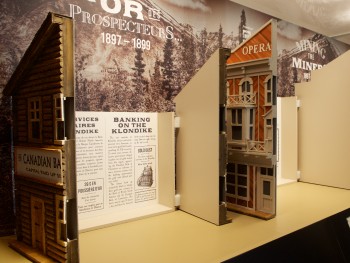 At the touch of a button, motors concealed beneath the “street” open the facades, revealing the text.

What fun the model makers must have had building details like the balcony and window frames for the Opera House. 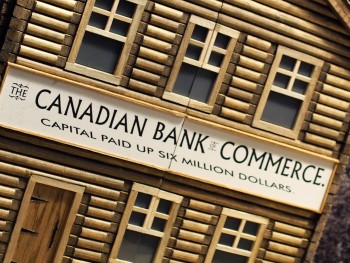 Yes, the Dawson branch of this bank really was in a log building.

In the front of the display case is a selection of artifacts that are unique to the Klondike gold rush. Bank notes stamped with “Yukon” share the case with tokens for dance halls, saloons and cigar stores—currency from a place where small change didn’t exist and a broom could cost you an ounce of gold. And yes, we do have gold. Drop by for a look after (or before) seeing Gold Rush! El Dorado in British Columbia. You’ll find Mining the Miners on the lower level, next to the Canadian Stamp Collection. 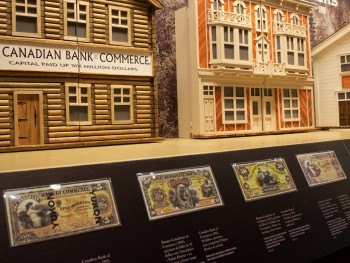 Bank notes shipped to the Klondike gold rush were stamped with “Yukon” or “Dawson” to identify them.

Small change was scarce in the Klondike so businesses made their own.