In May 2013, the National Currency Collection acquired over 650 engraved steel dies (printing plates) from the British American Bank Note Company. After careful selection by our Chief Curator Paul Berry, the dies were delivered to the Bank of Canada Museum’s collection facility, each wrapped in kraft paper. There were labels to be detached and then each die was wiped clean with mineral spirits and soft cotton swabs to remove a dark, greasy substance covering the surface—evidence of their past use as security printing plates. During this cleaning process, we discovered that eight dies were broken in half, likely from past printing activity. Before they were to be placed in collection storage, these broken dies were evaluated for further conservation treatment. Ultimately, the decision was made to repair the breaks. 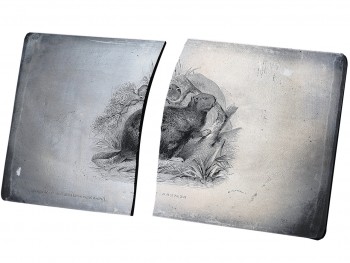 Prior to treatment, the plate shows a clean break. 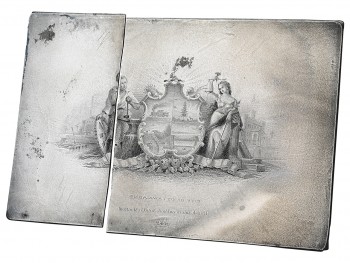 This engraving is of an early coat of arms for the City of Ottawa.

In heritage conservation, broken metal objects can be reassembled with an adhesive most commonly used for repairing glass and ceramics. This adhesive, known as HXTAL, is a two‑part epoxy resin which, through a chemical reaction, hardens after mixing. It works well with dense materials as it creates strong, tight bonds and has the added benefit of neither swelling nor discolouring over time. 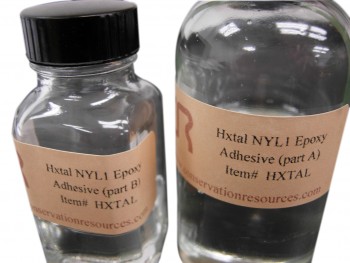 HXTL is called “hextall” by conservators. 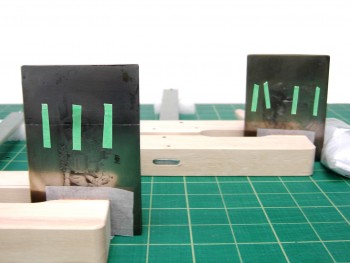 No, the plates weren’t taped together; just held together while the adhesive cured.

Each die was reassembled and held together with thin strips of painter’s tape, then placed upright in clamps. Small drops of HXTAL were then applied along the break with the tip of a wooden stick. When it is freshly prepared, HXTAL is a very thin liquid and through capillary action, it can penetrate into narrow cracks and join pieces together using very little material. The next day, any remaining adhesive was removed with swabs and wooden sticks lightly dampened with acetone. This is important because after 24 hours, HXTAL will become too hard to be removed without potentially damaging the object. The dies were then left in the clamps for an additional week until the adhesive had fully cured. 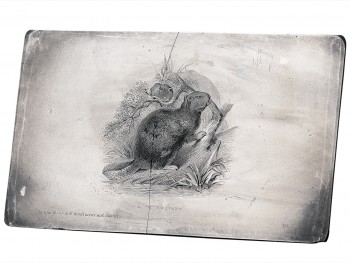 The beaver plate after reassembly with epoxy. 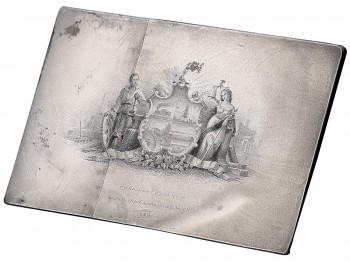 The Ottawa coat of arms put back together.

Now that they have been repaired, the final step is to create custom mounts for each die to ensure they are properly supported while in collection storage.