In late April of 2015, the National Currency Collection finally succeeded in acquiring a Spanish gold cob, famous in legends and tales of pirates and their buried treasures! Gold doubloons, as they were also known, are by no means rare, but they’re not readily available either. The quest for the iconic Spanish-American gold coin had been a long one, and sometimes it felt like digging for buried treasure.

The greatest challenge was finding a cob in good condition that shows as many of its original details as possible. Apart from the pattern pieces (also called “royals”), which were perfect examples intended for presentation to officials, most cobs were crudely struck and, often, part of the design of the coin was missing on either side. So why were these coins so crudely struck? It was all about speed. 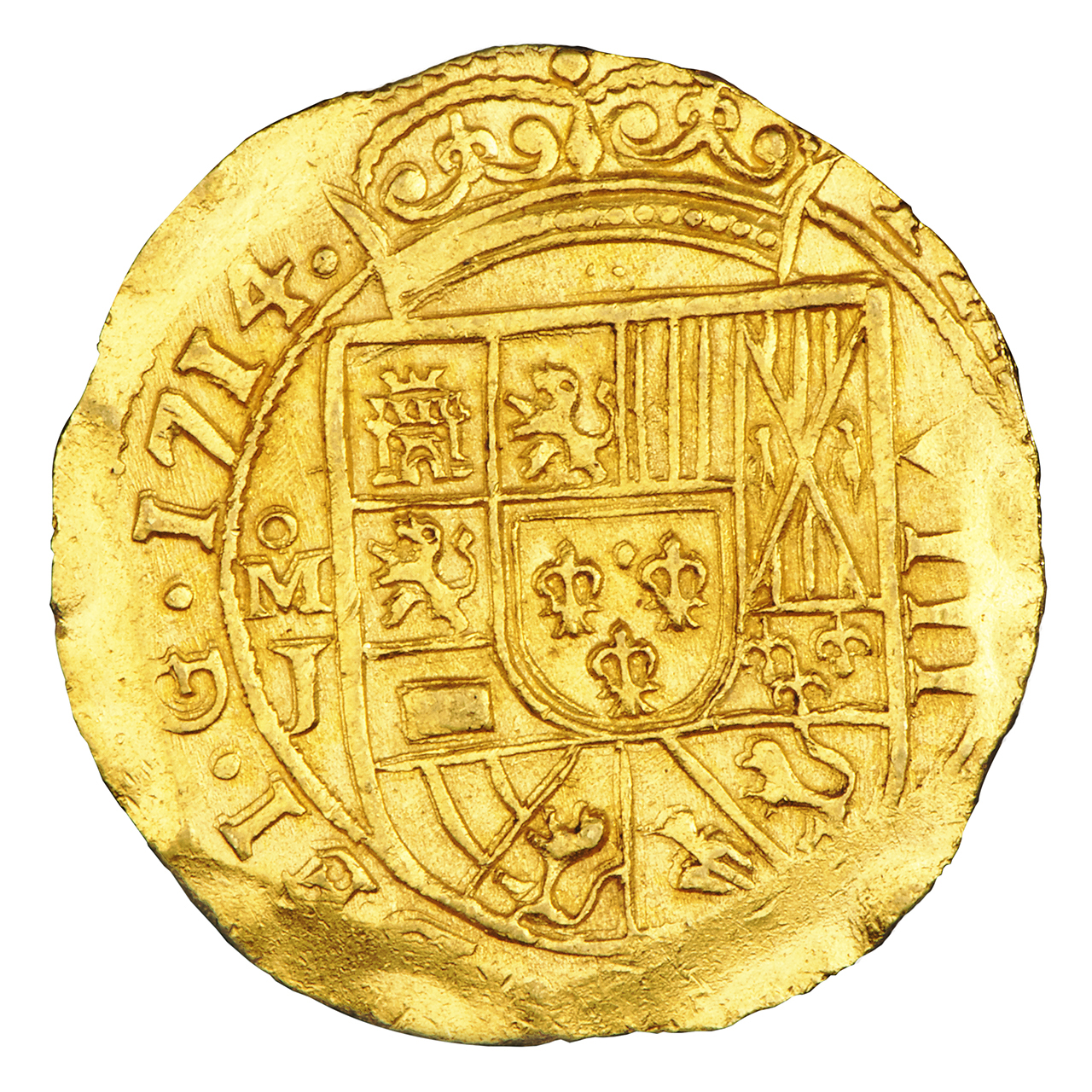 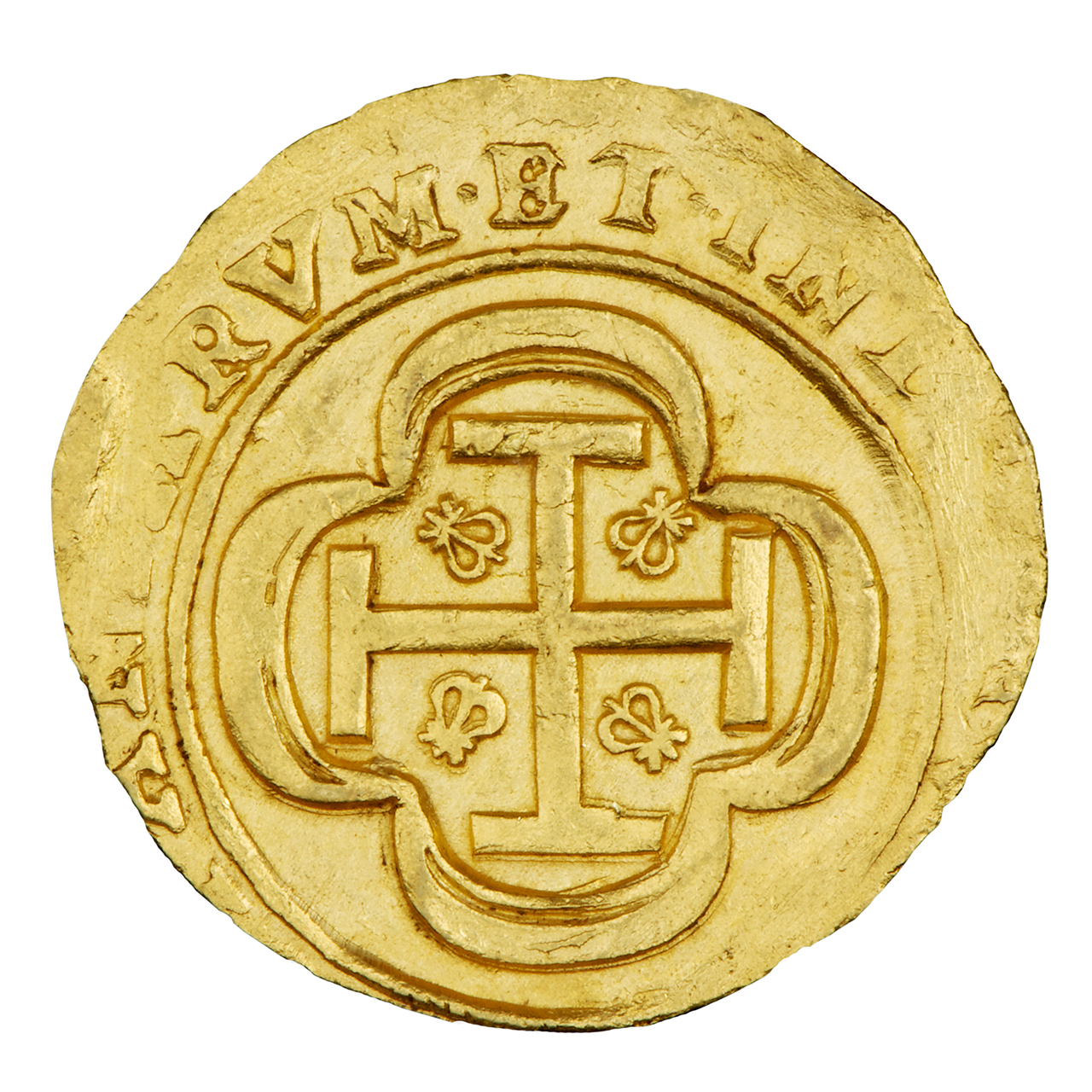 This coin was salvaged from one of a number of Spanish treasure fleet ships that sunk off the coast of Florida in a 1715 hurricane. (NCC 2015.24.1)

The purpose of minting cobs was to have the coins assayed (the metal content measured and valued) and struck so that the King of Spain could collect his fee—quickly. This fee, called the quinto (or fifth), was the percentage of tax owed to the king on all bullion. In theory, all treasure and subsoil minerals belonged to the king, regardless of who owned the land where they were found. However, since the king could not mine the precious metals in Latin America, he allowed colonists to mine on their own initiative—provided they registered their claims with the governor and the officers of the treasury and swore to bring all their bullion to the local royal smeltery (casa de fundición) to be assayed and taxed. All gold and silver leaving America had to pass through mints in cities such as Mexico City, Lima or Potosi, where they were assayed and the fees collected before shipment to Spain.

Upon arrival in Seville, before being handed over to their owners, the coins were weighed again, and assessors confirmed that they were properly struck and the fees paid. Clearly, the primary purpose of minting cobs was not to provide coinage for trade, but to make sure the king collected his booty! From Seville, the cobs went in all directions and were either melted and re-struck into new coins for trade, hoarded or converted into bars for safekeeping.

The famous Mexican shield-type 8-escudo gold cob shown here is a crude piece. In the striking process, the blank coin was cut off the end, or cabo (meaning tip, or end— hence, cob) of a long bar of refined bullion and then trimmed to the exact weight required: 27 grams for an 8-escudo coin. If too much was taken off, the coin was trimmed to a lower denomination, or possibly some gold was melted and added.

Once the assayer approved the quality and weight, the blank coin was struck by hand using two dies. The obverse die for the Mexican cob features the Spanish Royal shield. The mintmark “Mo” for Mexico and the assayer’s initial “J,” for José Eustaquio de León y Losa, are to the left of the shield. The value in roman numerals (VIII) is to the right. The legend, mostly missing on this coin, would have read PHILIPPVS V DEI G (“Philip V by Grace of God”) along with the date. On our coin, the year 1714 is clearly visible. On the reverse, the design consists of a quatrefoil cross with fleurs de lys that look like crowns in each quarter of the cross and the legend HISPANIARVM ET INDIARVM REX (“King of Spain and India”).

The Mexican 8 escudo cob is a welcome addition to the National Currency Collection. It is yet another puzzle piece that enables us to better understand the extent to which foreign coinage circulated as official legal tender in the North American colonies.