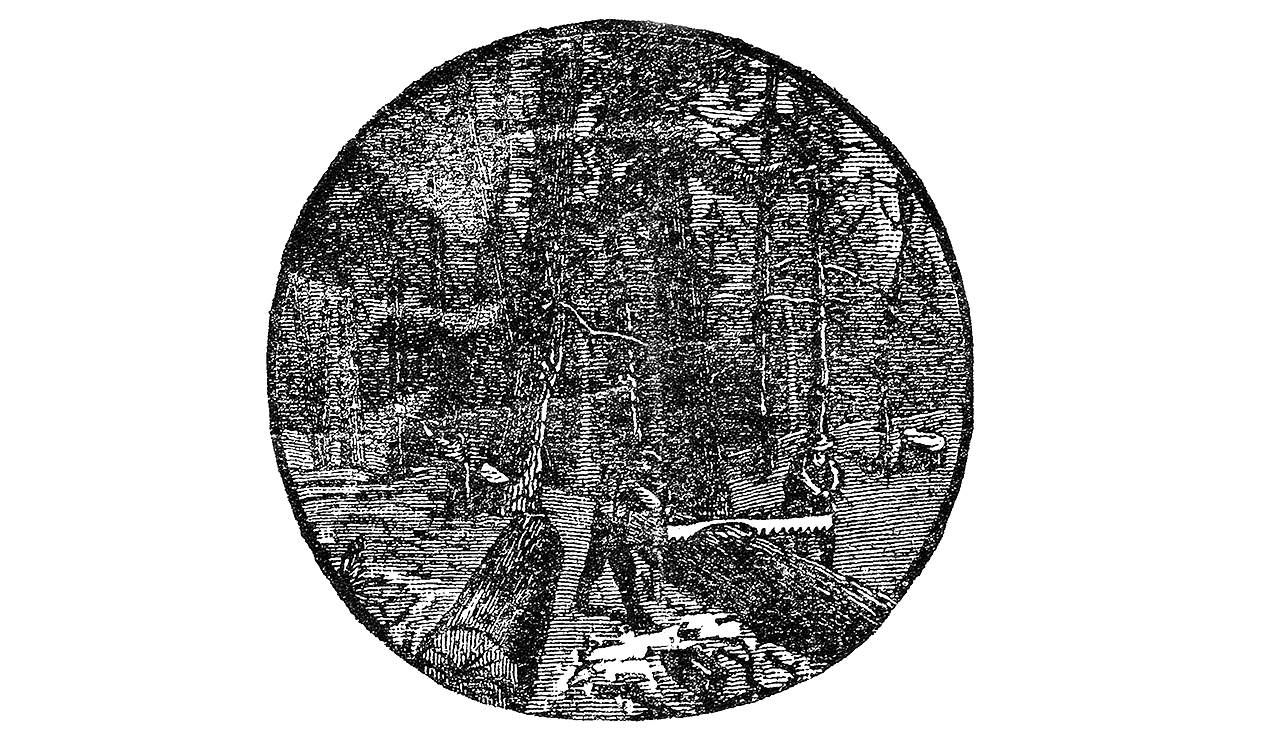 An enhanced view of the engraving on the scrip showing two lumberjacks operating a whipsaw.

Before banks were established in remote regions of Canada, paying employees involved shipping currency long distances into wild and often lawless regions. The alternative to this risky enterprise was for the company to issue its own money. Called scrip, this private merchant currency was redeemable for products at the company store and even frequently in the local economy. When employees returned from the bush, they were able to redeem their scrip for cash at the company head office. Established in 1900, the Grand River Pulp & Lumber Company operated a mill at Hamilton Inlet at the mouth of what is now the Churchill River near Goose Bay, Labrador. From 1902-1911, the company issued scrip in 5¢, 10¢, 25¢, 50¢ and $1, $2 and $5 denominations to pay their lumber workers. 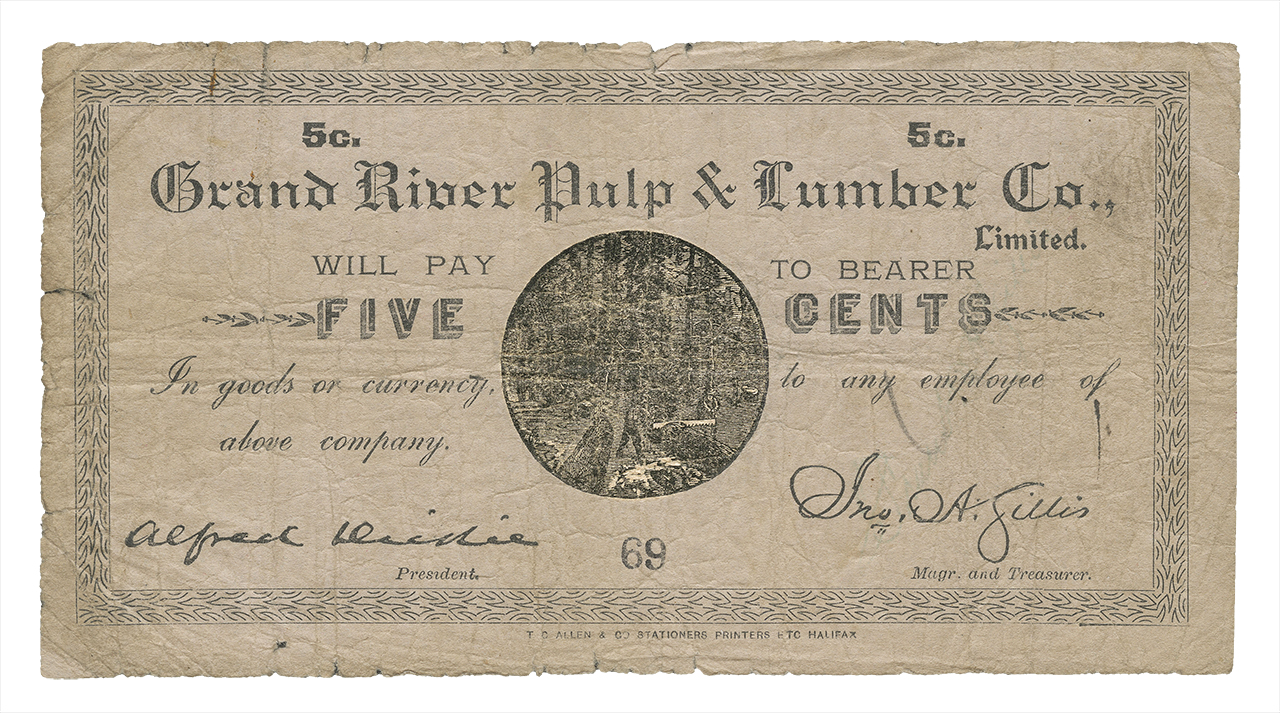 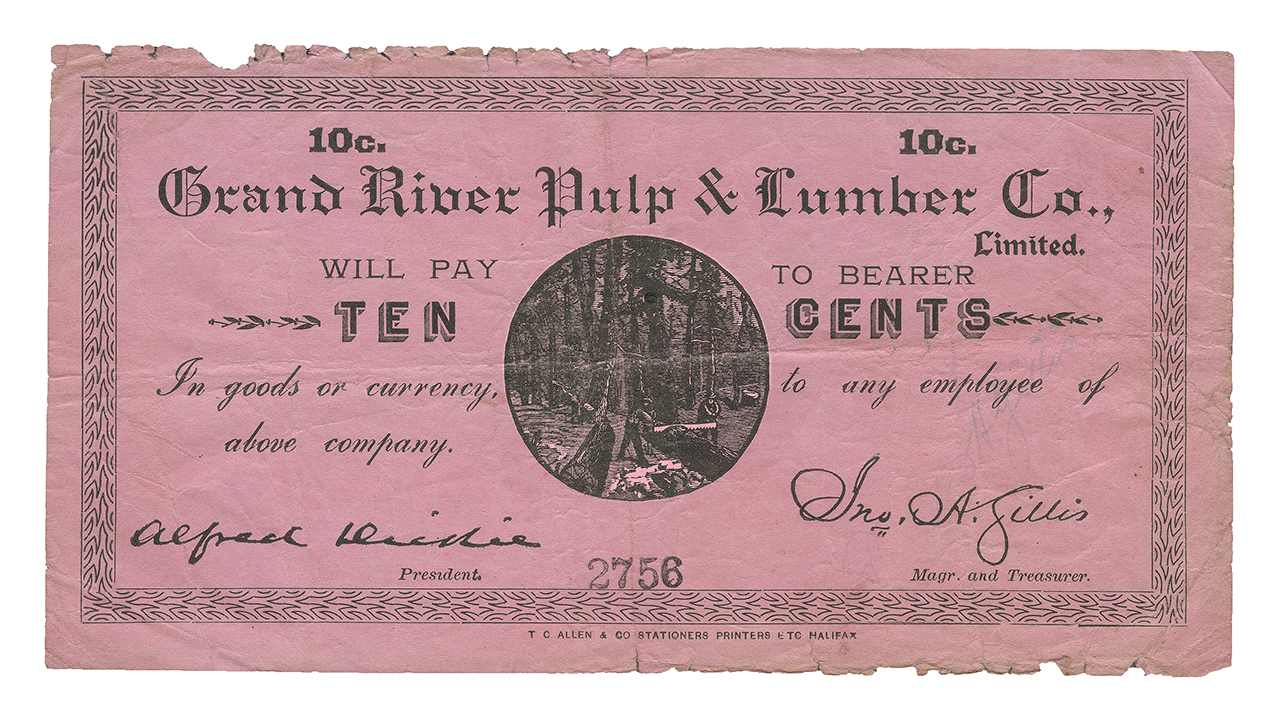 When Alfred Dickie, a Halifax lumberman, applied to Newfoundland for a timber licence for his Grand River operation, the Quebec government lodged a complaint, claiming it was on Quebec territory. They even went so far as to stamp Dickie’s logs as Quebec lumber. Newfoundland refused to cancel the licence and a long, drawn-out border dispute ensued. Quebec and Newfoundland took the case to the British Privy Council in 1904, which finally ruled in Newfoundland’s favour in 1927. Quebec did not accept the judgment and its appeal remained on the books until it was officially cancelled in 1971. Alfred Dickie could have had no idea that the border dispute sparked by his timber licence application would remain unresolved for sixty years after his operation went out of business. 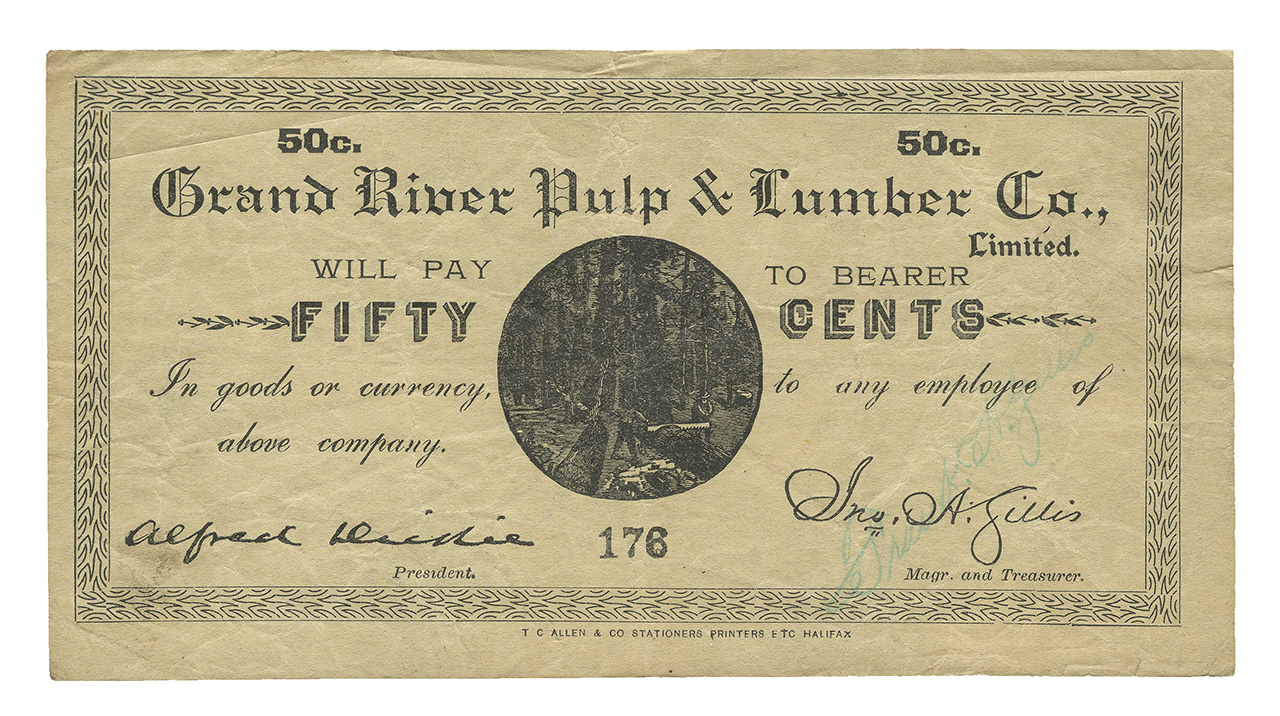 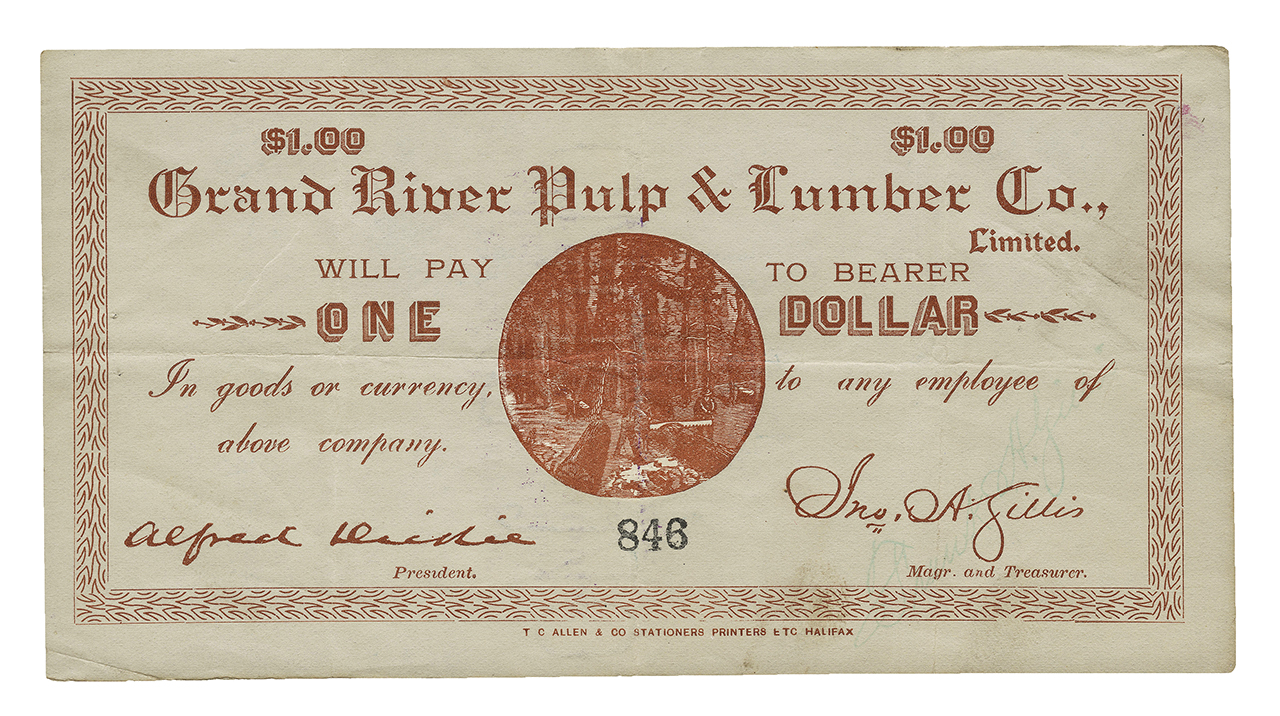 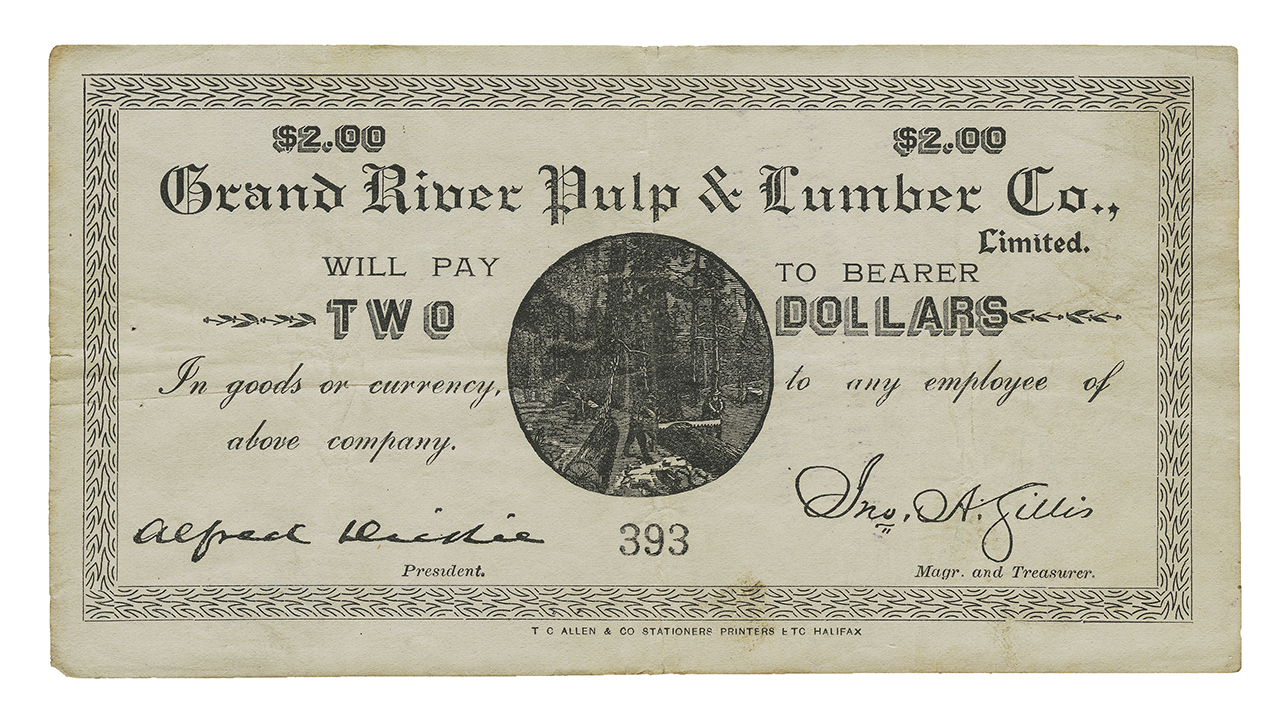 The Grand River Pulp & Lumber Company issued the only known merchant scrip in Labrador, a thinly populated region that to this day has not been entirely explored. The National Currency Collection holds a complete set that once belonged to former Newfoundland premier, Joey Smallwood; a remarkable connection to this fragment of our history. 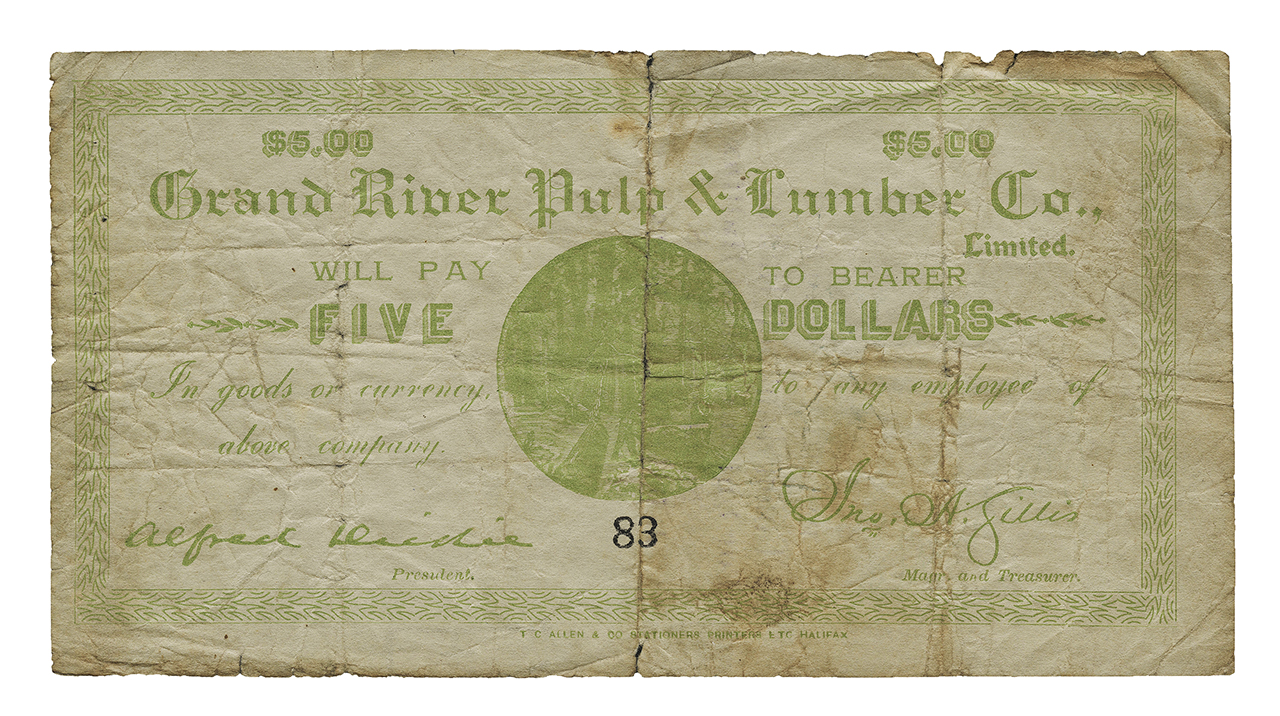