Behind the scenes of our new temporary exhibition

June. The glorious drift from spring into summer. The mild, star-filled nights. The morning serenade of cheerful birdsong. What you may really be thinking is: “Ah, it’s the time of year when the Bank of Canada Museum installs a new temporary exhibit at the Canadian Museum of History.”

You would be correct, although possibly a little odd.

As I mentioned in our blog reviewing the CMH exhibition 1867 Rebellion & Confederation, our upcoming temporary exhibit is about what are called “phantom banks”. I’m not talking about anything supernatural but merely the nefarious activities of hucksters who printed bank notes that didn’t represent a real bank. Before the advent of the Bank of Canada, Canadian banks issued most of our paper money and those banks were supposed to have enough gold and silver coinage (specie) in their vaults to provide intrinsic value for the majority of those bills. In 1837, collapsing US real estate and export markets, and insufficient specie in eastern banks caused economic chaos on both sides of the border. Banks ceased to issue coins in exchange for bank notes and paper money reigned in the marketplace—a perfect time to introduce bogus bank notes to an uninformed and cash-hungry population. 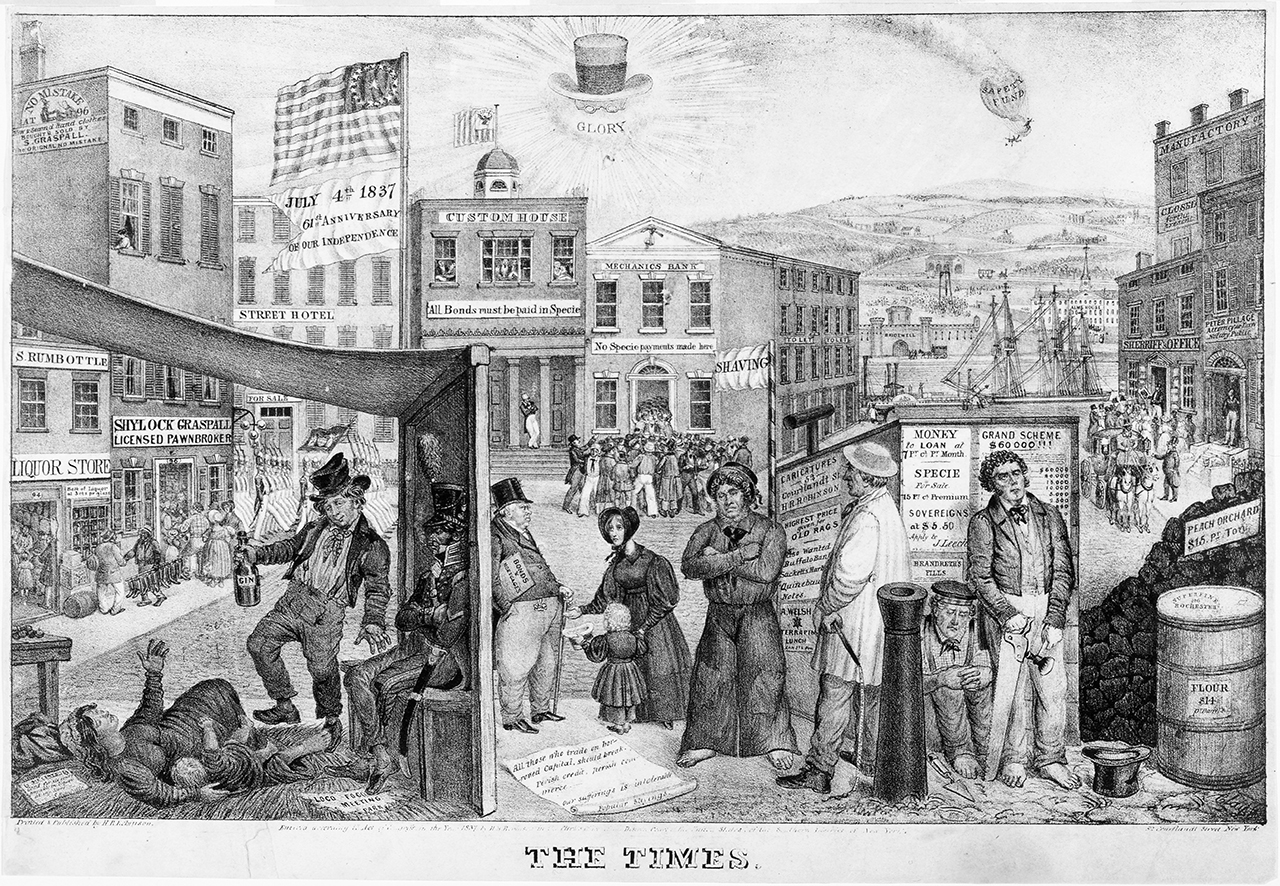 E.W. Clay illustrated the effects of the 1837 financial crisis on the working class. President Jackson, whom he blames, is the top hat and glasses in the sky.

To interpret this subject, one of the methods we chose involved creating several photographic tableaux to help tell the story of one particular phantom bank—The Bank of Ottawa. In exchange for pizza and a day out of the office, a half-dozen Bank employees were persuaded to dress up in period costumes and re‑enact three key moments from the history of this shady “bank”. Upper Canada Village kindly provided us with shooting locations and costumes. Ottawa’s Bytown Museum also leant us a pile of period costumes, of which one was a perfect fit for our smaller crook. However, the confusing variety of buttons meant that for the first time in several decades, he needed help doing up his trousers. 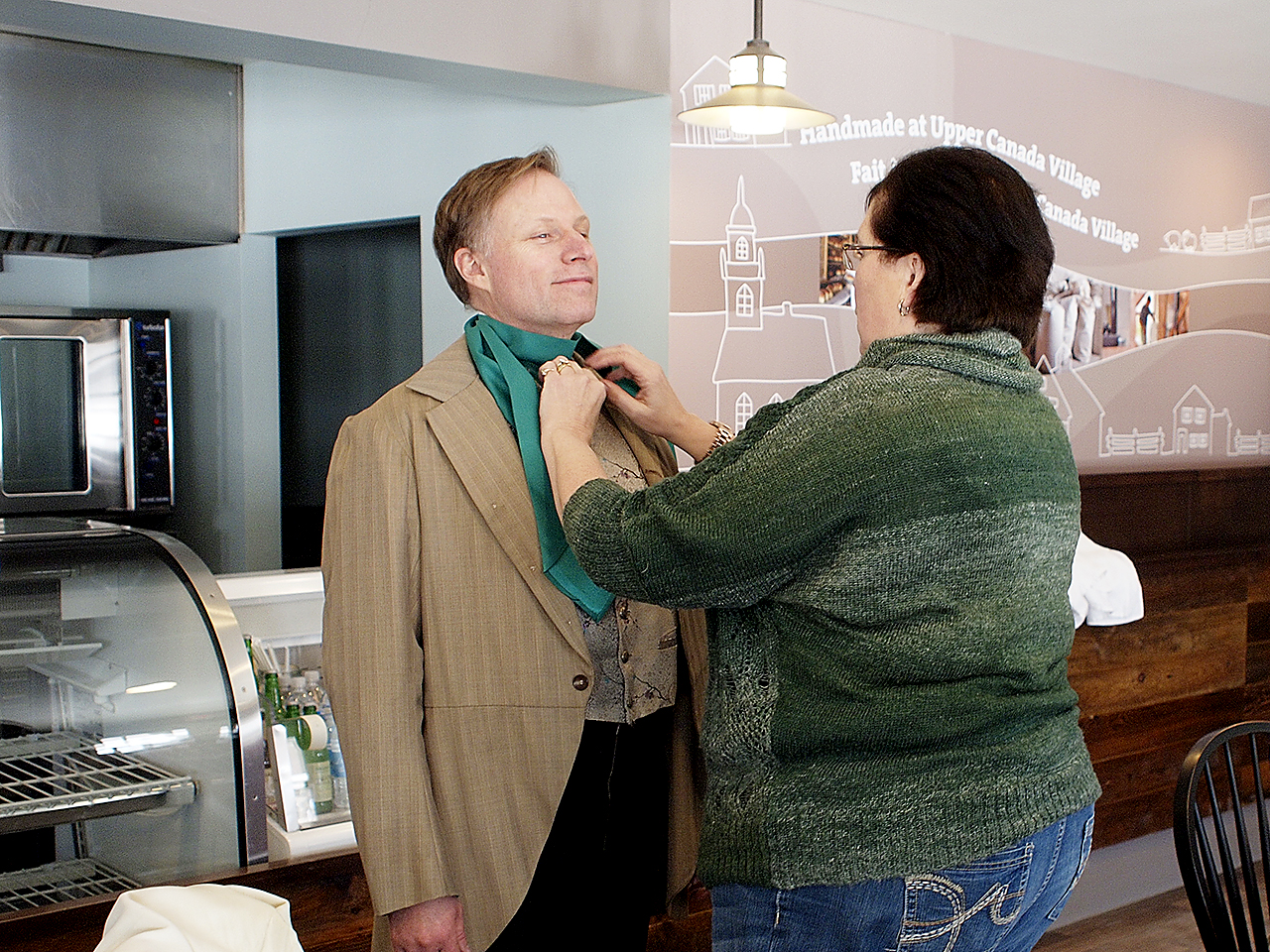 A phantom banker has his neckwear adjusted. 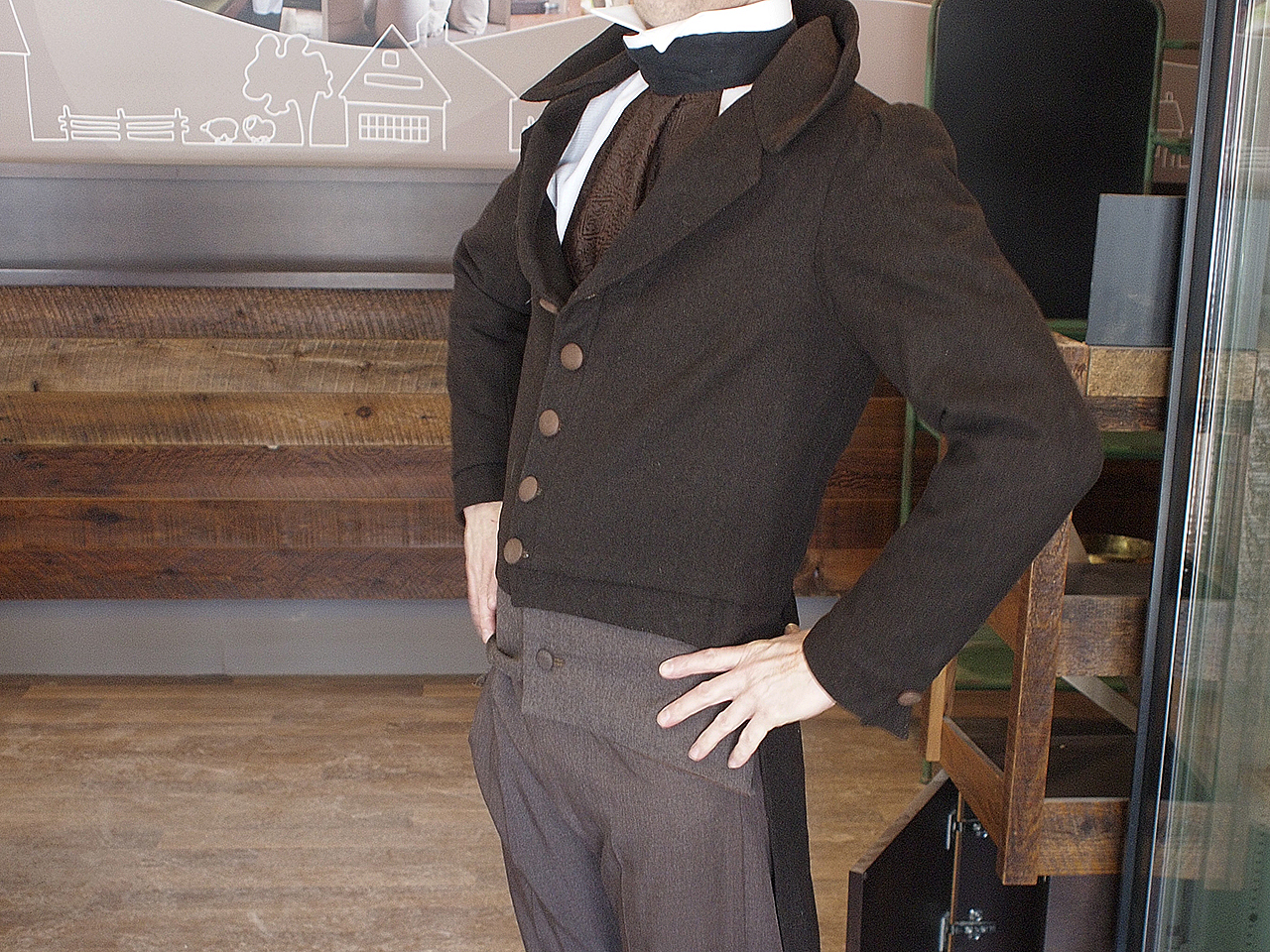 The wrong way to do up your early 19th century “fall front” trousers. 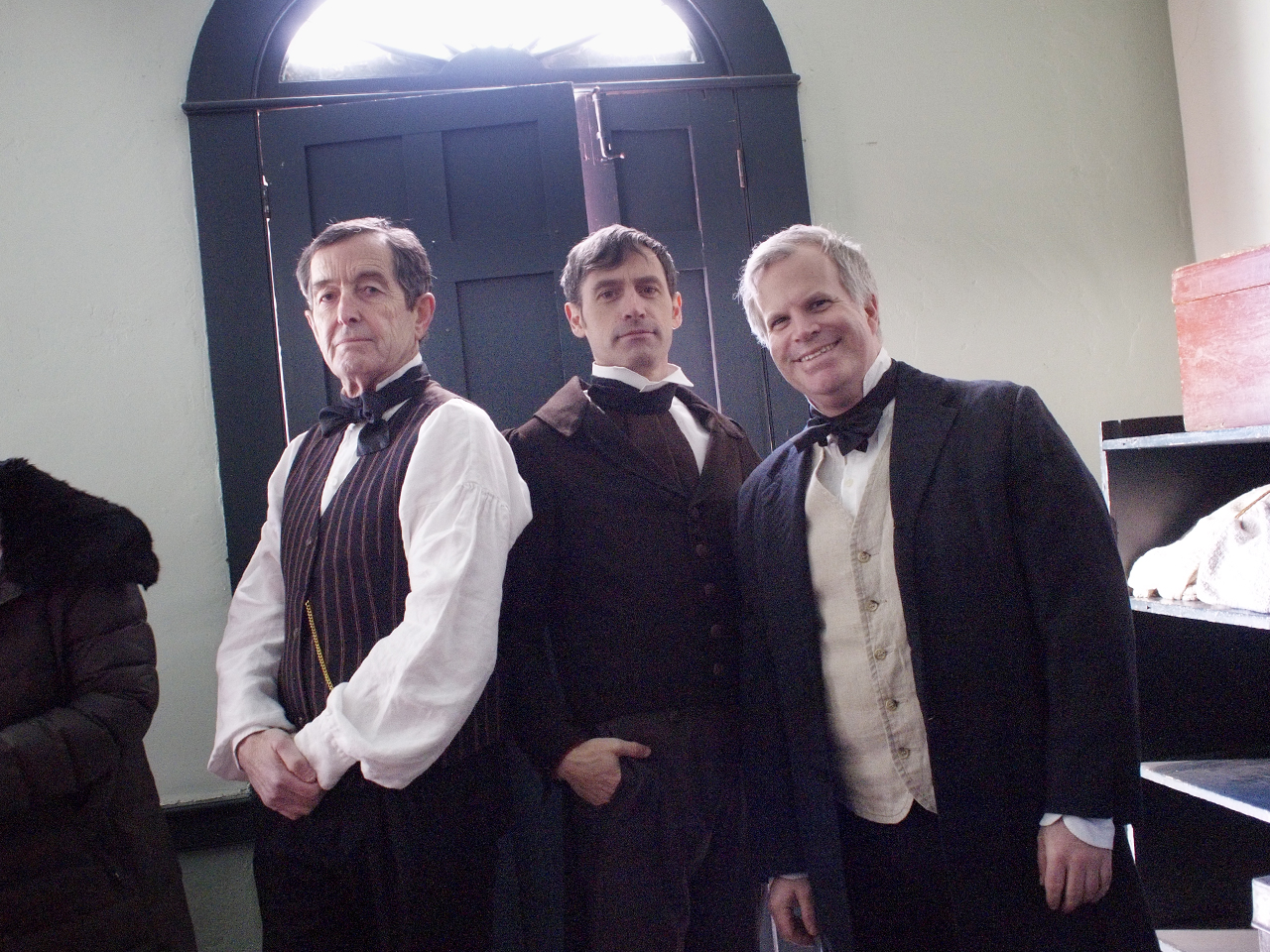 The tableaux could not be shot in single exposures. To create both a panoramic image and a sufficiently big digital file size, the shots were assembled from multiple exposures. The photographer released the shutter, then swung the camera a few degrees and released the shutter again, moving across the scene by increments until the entire view was captured (three to six frames). It meant everybody had to keep still for a few very long moments—a task not made any easier by the chill March air drifting through the open door. Photo stitch software was later used to assemble the images seamlessly. Historical details, sepia tones and, in one case, an entire wall of clapboard needed to be digitally added to the images to enhance authenticity. The results are just great. Is it counterfeiting if we reproduce 180 year-old bogus bank notes? Props from the first tableau. 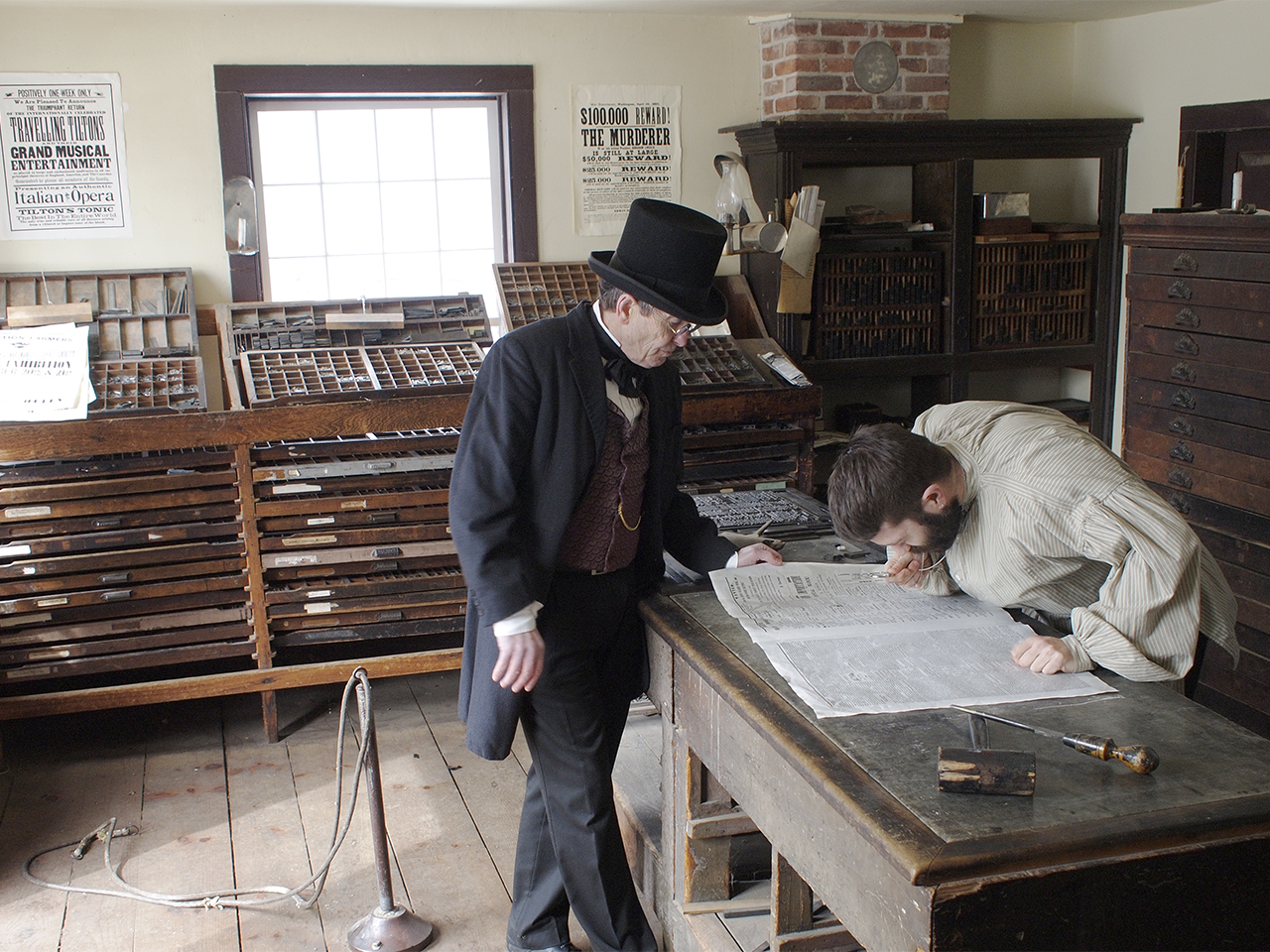 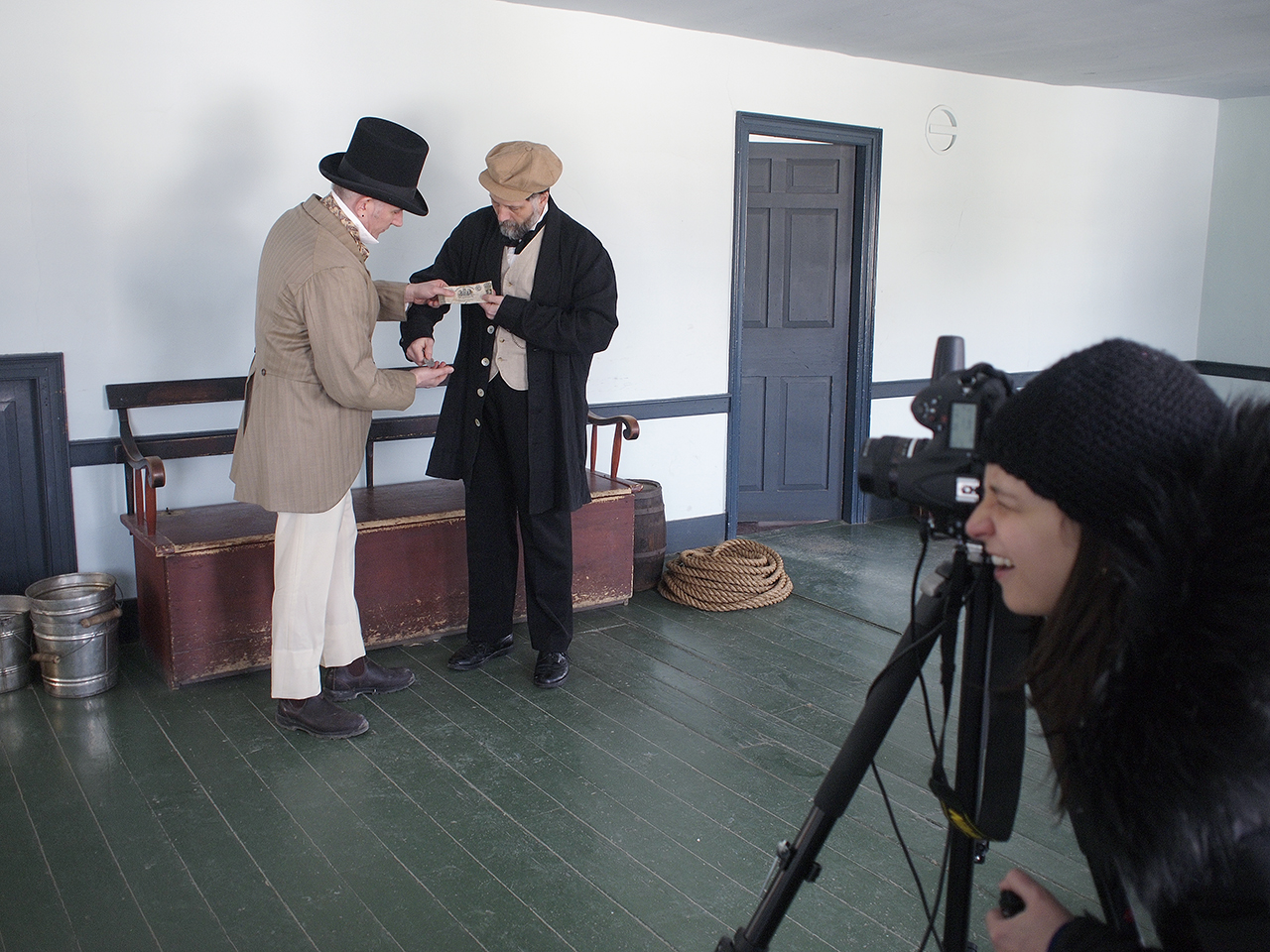 2 of our actors hold still for the first of 4 exposures of tableau 3.

These images will be displayed as a single “lenticular” photograph. Spanning nearly the width of the display case, the images will form a background for the exhibit. Remember those old postcards whose images changed when you tilted them, making the kitten chase the butterfly? Those were lenticular photos, but ours will be two and a half metres long, one metre high and feature three images that will blend and change as the visitor shifts viewing position. It’s going to be very cool (no kittens, though—they wouldn’t stay still).

Five images from the first tableau roughly assembled together as one.

The first tableau as assembled by the photo stitch software and further retouched by our designer.

Naturally there will be artifacts a-plenty. Phantom notes, legitimate notes, documents, a printing plate, coins and tokens will feature in this fun and charming exhibition. Swindle! Canadian Phantom Banks has now been installed, complete with a hand-painted sign thirteen feet long! Guides for both solvent banks and bogus banks.