Notes from the Collection: A Buying Trip to Toronto

Recently, from October 3 to 5th, collections staff were at the Toronto Coin Expo, held at the Toronto Reference Library on Yonge Street. The show boasts informative lectures, a large auction of coins, tokens and paper money as well as a showroom, called a bourse, where dealers greet clients and buy and sell material. We went to the show this Fall hoping to buy two rare Canadian notes: one of the first notes issued by Montreal based Banque du Peuple in 1835 (when Upper and Lower Canada were separate colonies), and a piece of paper money called merchant scrip dated 1876 from the stone quarrying firm Read and Stevenson in Clifton, New Brunswick. Auctions, unfortunately, can be long and tiring affairs as one waits for material to come to sale. Happily, despite having to wait almost 4 hours, once the air had cleared and the auctioneer had hammered down the items, we were the winning bidders. 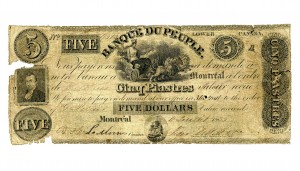 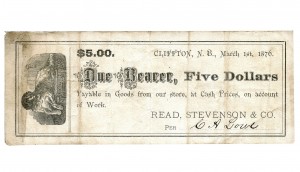 This purchase alone would have made the show successful, but there were other interesting items on the bourse floor. One dealer was selling 19th century copper printing plates for cheques and other financial instruments. We chose two pieces for the Collection: one for a cheque drawn on the Imperial Bank in Rat Portage, now Kenora, in northwestern Ontario, and the other from a private banker in southwestern Ontario. Private bankers provided banking services in small towns before banks built branches in these communities. The plate from Rat Portage clearly shows how businessmen in isolated areas often performed many services. Take a close look at the advertising panel to the left of the bank’s name. John W. Colcleugh named at the top of the panel, clearly intended to use the cheques printed from this plate to promote his many businesses. Early printing tools are rare and we were pleased with this find. All in all, it was a good show! We returned to Ottawa tired and poorer but richer for our purchases.

Take a look at the photos and tell us what you think about these new additions to the Collection. 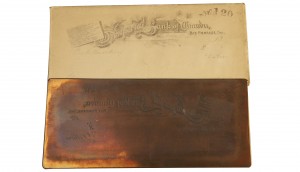 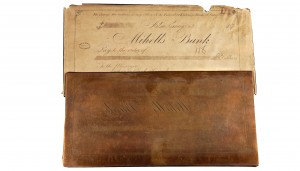