First Artifacts to Leave the Museum: And they were big


Before the museum closed for renovations on 2 July, technicians began to remove the heavier artifacts in late May. First to go was the strong box. Built of ¼” thick welded steel plates, this trunk was used by the Bank of Upper Canada in Toronto between 1821 and 1866. It weighs around 300 lbs. and required two large men to move. Collections Manager Patricia Measures carefully removed the artifacts: Bank of Upper Canada bills arranged in a ‘filler stack’ (a stack of bills with a real one on top and blank paper underneath) and early Canadian coins affixed to a display backdrop of prop money bags. Both the coins and the paper money will be subjected to detailed inspections and the coins will require careful removal of any residue before going into storage. The artifacts had been on display in this case for over 30 years. Despite its weight, the strong box was soundly attached to the display cabinet and had to be lifted up off of 4 inch bolts before it could be lowered to the floor and slid into its crate. 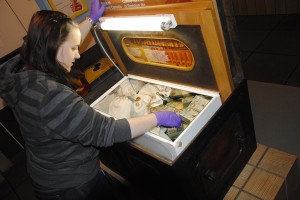 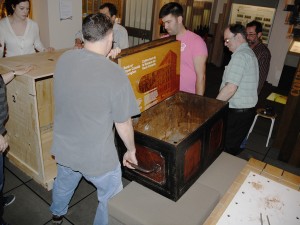 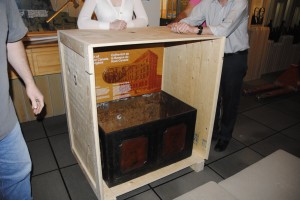 Just around the corner was the geometric lathe - a mechanical engraving machine that functioned like a Spirograph and was operated by the British American Banknote Co. Its purpose was to engrave the intricate patterns of loops and spirals seen in the borders of older bills (called ‘gilloche’). It weighs far more than the strong box: 4 people, creative thinking, some colourful language and a hydraulic lift were required to manoeuver this artifact to its new storage crate. Actually, the crate needed to be built around the lathe, rather than the lathe put into a crate. 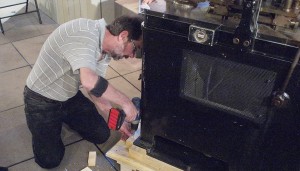 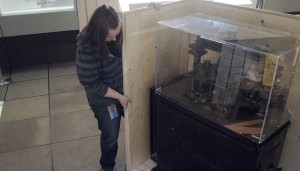 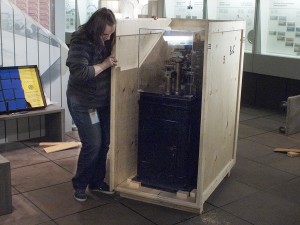 As you may have seen on the news, the Museum’s Yap Stone was removed from the centre court of the Bank on 3 June. Yap Stones were used as a status symbol and trade token on the Micronesian island of Yap during the nineteenth century. The 2 metre tall, nearly 2000 kg rai stone (the largest outside of Yap) has been sitting on its stand in the Garden Court of the Bank since 1979. A steel cradle was built for the stone, windows were removed from the Bank’s curtain wall to gain access and, finally, a crane was brought in to lift the piece out. The 50 tonne capacity truck mounted crane gently elevated it, rotated it sideways, lifted it out the space afforded by the recently removed windows and then placed onto the back of a semi-trailer truck. It all went smoothly and quickly; no toes were harmed in any way.

All three artifacts are now safely stowed at the Museum’s storage facility in Gatineau. 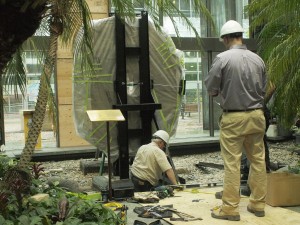 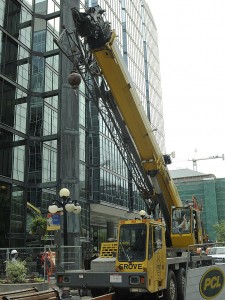 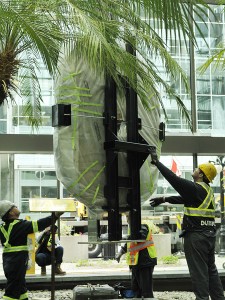 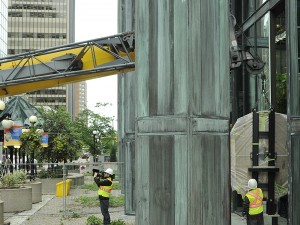 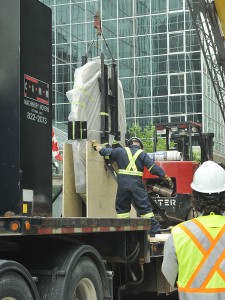 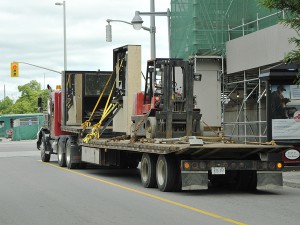