Death in the Ice


Sir John Franklin at the Canadian Museum of History

A ship’s bell is considered its heart. This one, recovered from HMS Erebus, is a star artifact.

Earhart in the Pacific, Mallory on Everest, Franklin in the Arctic… Who doesn’t find the mysteries of lost expeditions fascinating? However, the fascination people have for Sir John Franklin’s fate seems especially durable. That’s no surprise given that finding him and his men (dead or alive) was the direct objective of some 20 Arctic expeditions from 1847–59. A dozen more expeditions were sent out to supply or rescue the first 20 and a further 10 were indirectly searching. The searches themselves have since become the stuff of legend. Ships were lost and men died trying to solve this mystery. Yet many artifacts were found, several bodies discovered and the final gap of the Northwest Passage mapped.

What became increasingly, if slowly, clear was that if Europeans were to make any headway in their Arctic explorations, they needed the assistance of the Inuit. And so did the National Maritime Museum in Greenwich, England when it developed it’s major 2017 exhibition, Death in the Ice, the Mystery of the Franklin Expedition. It was produced with assistance from the people of Nunavut, the Inuit Heritage Trust and Parks Canada. And now it’s at the Canadian Museum of History.

These fur parkas are actually the summer versions of traditional Inuit garments, underlining the severity of what Franklin’s men were going to face.

As the routes of Arctic explorers are traced on this animated map, areas that then became known to Europeans become visible.

The first major display you see after entering is an exhibit of Inuit clothing and tools. It’s an excellent way to establish just what Franklin and other Europeans were really up against when they set out to explore Canada’s high Arctic in 1845. This display also provides a wonderful contrast to the fine china and silverware shown as examples of what was taken aboard Her Majesty’s ships for their Arctic voyages. The explorers had every intention of spending several years aboard ship in the harshest environment on Earth, and they were used to their comforts (ie: 3,200 kilograms of tobacco!). However, it all must have looked absurd when the ships were abandoned and survival itself began to look like a luxury.

I was surprised that the bulk of the exhibition was not about the items raised from the wrecks of the HMS Erebus and HMS Terror. A few of those artifacts are peppered throughout the exhibits as well as in their own area. However, most of the artifacts come from older discoveries at campsites, from trade with the Inuit or are items from the dozens of expeditions involved in searching for Franklin.

Many artifacts tend to be food related, such as this tea tin found on King William Island. Silver cutlery was used not only for eating but later to trade with the Inuit. 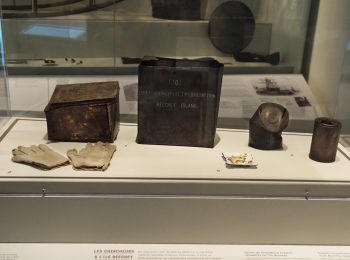 Garbage is gold to an archeologist. These items were found at Franklin’s Beechey Island camp, where the mummified remains of three sailors had been discovered.

Taking up most of the floorspace is a display on the shipboard life of the HMS Erebus. It is cleverly presented in a full-sized floor plan of the ship, featuring outlines of cargo, crew accommodation, meal arrangements and Franklin’s comparatively luxurious cabin. A piece of the Erebus—the leg and base of a table—can be found arranged on the mock-up of the table in Franklin’s cabin.

When you see HMS Erebus laid out on the floor you realize how small a ship it really was.

Franklin’s cabin held all the charts and maps and a big library. The original leg and frame from his work table is visible.

As the title suggests, this exhibition is more about the mystery of the expedition’s fate than the expedition itself. A lot of floorspace is given over to the many attempts to find Franklin including an interactive timeline showing details of every mission. The timeline is a real rabbit hole of an interactive and I found myself there the longest of any part of the exhibition. Equally compelling is a small zone devoted to the many ways that the men may have suffered and died—including showing evidence of cannibalism. Grisly, yes, but part of this exhibition’s message seems to revolve around suffering and desperation. 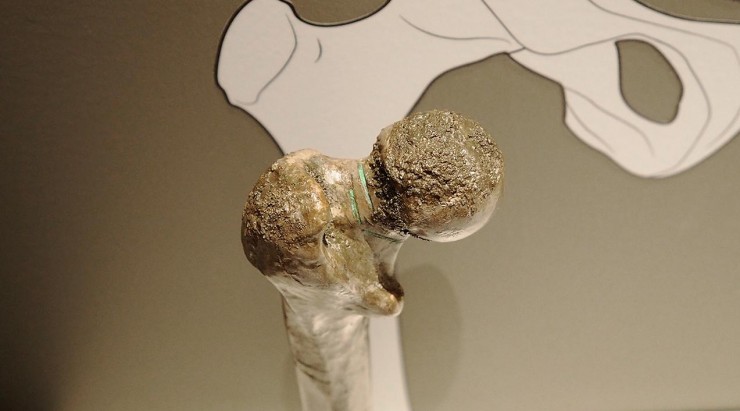 This reproduction artifact showing proof of cannibalism is the most poignant item of all—illustrating the sheer desperation of these poor men.

The final zone outlines the discoveries of Erebus and Terror and I felt a sense of relief when entering. After so much content about privations and struggle, there is comfort in seeing how today’s technology easily negotiates the Arctic and there is pride in Parks Canada’s achievements. You can even find a small sense of closure there. The artifacts are few but significant and the zone is an interesting bookend to the Inuit experience at the beginning: two cultures have managed to function in this brutal place but the Europeans could never have hoped to succeed without the help of the Inuit.

The public image of Franklin is about his disappearance. Our exhibition explores the adventurous career that led him to his fate.

Death in the Ice, the Mystery of the Franklin Expedition is at the Canadian Museum of History through September 30. And don’t forget to head downstairs to see the Bank of Canada Museum’s complementary exhibition: Before the Erebus: The Making of Sir John Franklin. It’s on the lower level, next to the Canadian Stamp Collection.