The Canada Science and Technology Museum


A visit and chat with the CSTM team

Who’d have thought a collapsing roof and the discovery of mouldy walls could ever have been among the best things ever to happen to the Canada Science and Technology Museum (CSTM)? The former bakery warehouse that had been the CSTM’s home since 1967 had been deteriorating at an alarming rate and plans had been around since the 70s to purpose-build a new space. But nothing ever seemed to change and the CSTM had remained in a temporary space for 50 years. Until, that is, the sagging roof and fungus colony that forced the CSTM’s closure in 2014 prompted the granting of $80 million for a complete rebuild.

The new LED canopy gets more and more impressive the closer you get.

A crowd of us from the Bank of Canada Museum took an afternoon to tour the CSTM and have a chat with some of its exhibition development team. Between hearing about the incredibly tight schedules under which the work was done, and having seen the incredible things those who built it have done, I can say that it is not only wonderful, it’s a little bit miraculous. 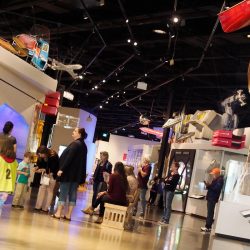 Artifact Alley is great fun and is peppered throughout with interactive or immersive stations the kids all run to. 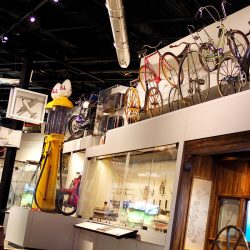 From sleds to radios, satellites to waffle irons and an amphibious car, Artifact Alley is a visit in itself. 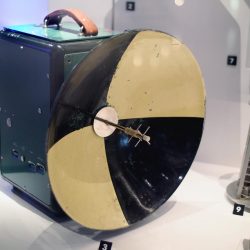 Apparently, it’s a “tellurometer.” That wasn’t much help, but the thing behind is definitely an atomic cheese grater.

The former museum looked like what it was: an old warehouse. Its entrance was practical, but dull, and the whole impression of the building itself was best described as…brown. Not anymore. The entrance is now capped by a strident, angular architectural form under which is a vibrantly colourful, ever-changing river of moving imagery—a beacon visible from the street. Called the LED canopy, it is made up of panels covered in thousands of tiny multicoloured light emitters. The panels hang over and around the doorway providing the illusion of a flat, seamless screen when seen from a distance, but when you get closer it becomes a semi-immersive experience. As you stand at the doors, images flow over and around you, featuring landscapes, dramatic weather, the cosmos and all sorts of technical and historical illustrations. It’s a tasty appetizer of a feature that may be there to build anticipation of what lies ahead, but which is also worth taking a moment to enjoy for its own sake.

Probably the next most dramatic thing about the museum is “Artifact Alley.” Running the length of the museum, this is a sort of historical candy store featuring hundreds of fascinating objects. It towers above the visitor like canyon walls and has the captivating, behind-the-scenes look of an open storage exhibit. It both anchors the museum experience and provides relief from the more thoughtful exhibits surrounding it. I found it best to wander in and out of it and not to treat it as a single exhibit. It’s one of those things that will clearly be worth returning to; I guarantee that you will have missed something the first time around (especially if you neglect to look up). My only issue with it was a lack of detailed information about the artifacts, but there is time and space for additions like that. 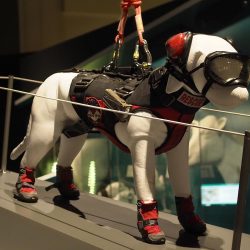 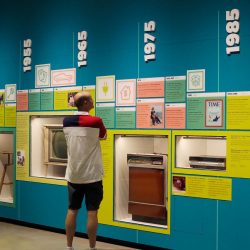 The “Technology of our Lives” zone is full of items that many people may remember using, making their visit a more personal experience. 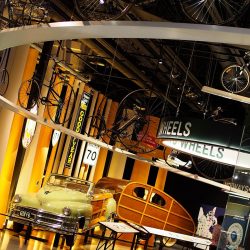 This Chrysler Windsor and matching trailer are likely the most photographed items in the whole museum. However, bicycles take the prize for the most numerous.

The exhibitions were not what I expected. I imagined over-arching themes such as “communications” or “transportation” but there were few zones like that. Such themes existed, of course, but some were embedded within more experiential storylines such as “Technology in Our Lives” or the surprisingly specific “Wearable Tech.” By creating storylines, the curators weren’t fenced in by artifact categories but were allowed to display a wide array of items in a single zone. It is a good strategy, providing a flexible means of exploiting the CSTM collection, putting more emphasis on how an item was used rather than what it is. “Into the Great Outdoors,” for example, is an iconic Canadian theme exhibiting items that would normally never be shown together. One would expect the car on display to be featured with other cars, but no, it’s as part of a theme that also includes snowmobiles, bicycles, snow shoes and even camping gear. 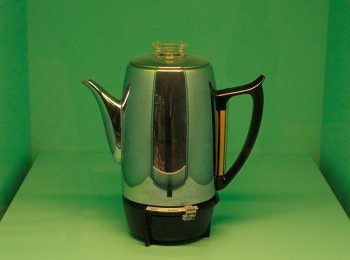 Some of the items in the “Technology of Our Lives” exhibition are displayed with a mischievous reverence that helps visitors understand the significance of everyday technologies. 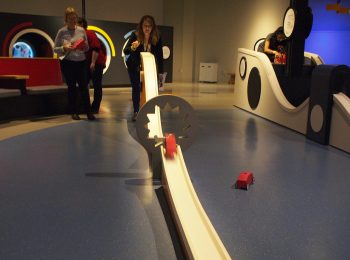 Even though the “Zooom” area was for kids under nine and their parents, we felt playing in this super fun area was necessary for our…um… research.

Part of the fun of the new museum lies in the personal aspects of these experiential themes. Sure, we love seeing cabinets full of brass telescopes or ship models, but when you see an artifact and say “Hey, my mom had one of those!” a special connection happens. Finding that point of identification between the artifacts and visitors is an effective means of engaging people and there are plenty of opportunities for this to happen in “Artifact Alley” or the “Technology in Our Lives” zones. There is one exhibition though, that creates that kind of connection all on its own. Yes, I’m talking about the “Crazy Kitchen”, a popular survivor from the old museum that has become an artifact itself. The Kitchen is wired to fond childhood memories of generations of museum goers; many of today’s patrons visit it for nostalgic reasons as much as for the experience. It still makes me stagger and giggle. 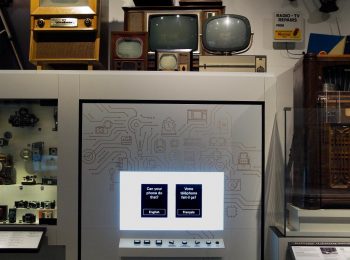 Digital interactive units, such as this quiz about smartphones, are centrally controlled and can be altered and updated from a remote location. 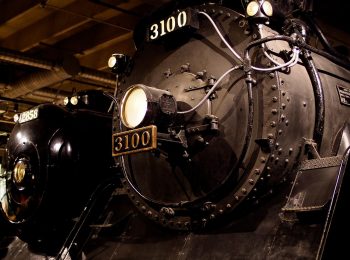 These monsters remained in their places throughout the renovation but are now interpreted for how they revolutionized our society as much as for how they actually functioned.

After touring the exhibits, we sat down with Bryan Dewalt, Director of the Curatorial Division, Exhibition Interpretation Officer Carolyn Holland and Curator of Communications Technology, Tom Everett. We then had a lively time trading museum development war stories. The CSTM team had only two years to develop their exhibitions. (The original developers of the 1967 museum had even less time!) Through a streamlined brainstorming and approval process, public consultation and a lot of overtime, they were able to do what I would never have thought possible, moreover they did it well. With an eye to the future, they also developed highly integrated digital management systems: robust control systems that continually monitor the functional conditions of high tech exhibit components and allow the remote uploading of fresh content or software fixes. The developers have no intention of getting caught with a static museum full of old exhibits.

Knowing all of this, the results go from great to kind of amazing. Kudos to you, CSTM.