Canada Day was our busiest day of the year. And why not? Not only were we located in the midst of the biggest party on the Canadian calendar, but we offered complimentary frozen goodies too (and balloons and tattoos...). You’d think we’d be more popular than Parliament Hill! At times it seemed like it. We can handle around 350 people at once, so when we hit our maximum capacity, it looked like everybody on the Hill had dropped in for a little economic and numismatic education. Or to use the washroom. We weren’t fussy, just glad to have everyone. 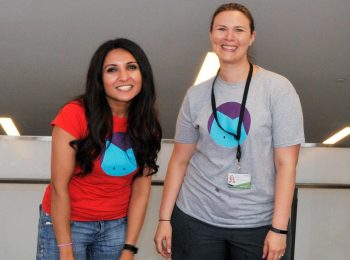 This year we appealed to the Bank as a whole for volunteers. Free food and a t-shirt paid off. 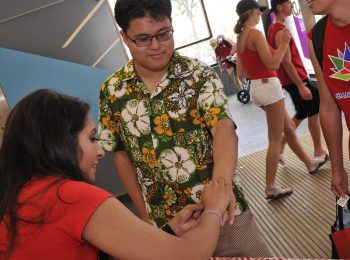 Our long-suffering volunteers worked hard all day sticking tattoos to arms and faces in the entrance of the Museum.

There was certainly lots to do at the Museum this year. In honour of Viola Desmond’s appearance on our upcoming $10 bank note, we offered visitors a trivia challenge about women on currency. We chose 25 bank notes and coins, all featuring women, and came up with a trivia question for each. The artifact images, questions and answers appeared on our digital touch wall as an interactive game. Some answers could be found just by inspecting the artifact, others required some pretty astute guessing but all revealed interesting aspects of these often-surprising individuals. Up to 6 visitors at time could play this game, though lots of people doubled up to test one another. 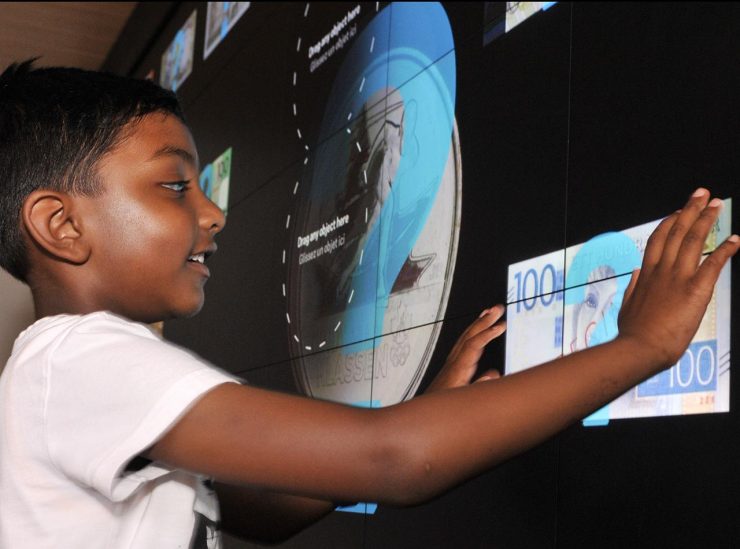 Nuns, poets, politicians, artists, actors, suffragettes: there were limitless opportunities for trivia questions about these women.

So popular were the origami folding stations during our Canadian Tulip Festival event that we brought them back for Canada Day. Of course, visitors folded maple leaves instead of tulips, but they still got to use the same cool paper with the bank note patterns. We ordered two boxes of it in red this time and though we didn’t run out, we haven’t got much left over. Despite the fast folding that went on, no paper cuts were reported (though the guides were standing by with bandages).

We usually offer free ice cream to our guests on Canada Day and this year visitors could get frozen fruit pops. However, they needed to do a little work for their treat: they had to go into the Museum galleries, find images of women on bank notes and take selfies with them. Hundreds of our visitors paid this cheap price for a cool bite. Likely most of them were going to take selfies anyway, so they might as well get paid for it (and who wouldn’t want to get paid with a treat?). 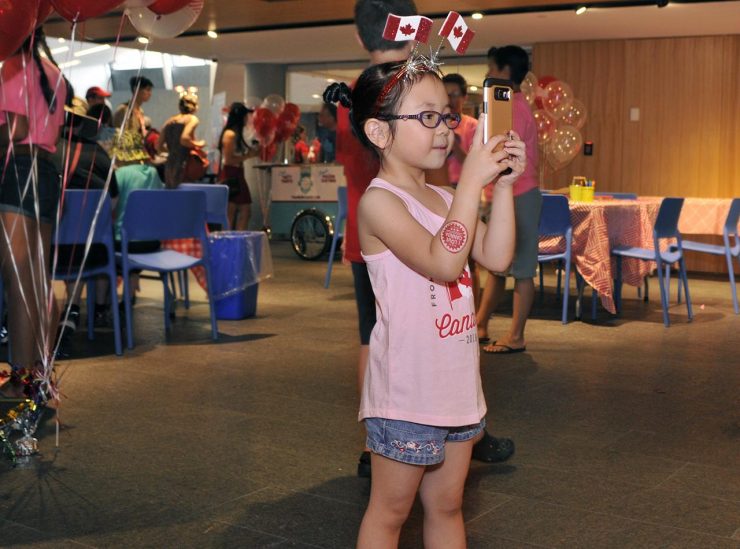 Finding a woman on a bank note wasn’t too hard, but taking a selfie with such a tiny portrait was a bit of a challenge.

About once a week, some visitor will ask our guides if we are giving away samples of money. Every time, the guides smile, laugh and shake their heads. However, on July 1st, 2018 we finally did give away samples! Well, sort of. Coin designer and maker Arthur Ishkaev brought his portable coin mint to the Museum this year and swung the hammer to strike some coins for the visitors. No, the coins aren’t legal tender and wouldn’t fool any store clerk or parking meter, but these little souvenirs were a big hit. And big hits of the hammer are what it took to strike these coins.  The line-up was a long one for the Strike Your Coin feature, but nobody’s in a hurry on Canada Day. 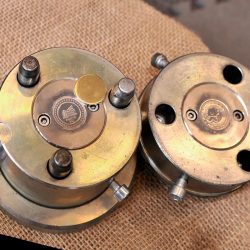 Arthur Ishkaev developed a coin for us and reproduced each side of the pattern as a metal negative set into a “working hub.” A blank coin is inserted between the hubs and they are struck with a hammer. 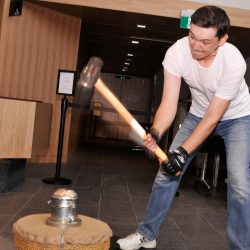 One, two, three, heave! A mighty blow makes for a perfect coin.

Who’d have thought such a simple thing could make so good a coin?

So, with the balloons, coin strikes, origami, trivia challenge and selfies, the Museum was a pretty crazy scene. We welcomed over 2,700 guests of all ages through our doors and we were just pleased to be able to offer a little shelter and family fun on such a nutty day in Ottawa.