Not Your Run-of-the-Mill School Visit

Naturally, we host visits from students every week. A major component of our mission is to educate young people about the functions of the Bank, the economy and the history of money. At the end of February, a selection of our staff each gave a presentation to an unusually attentive group of students. 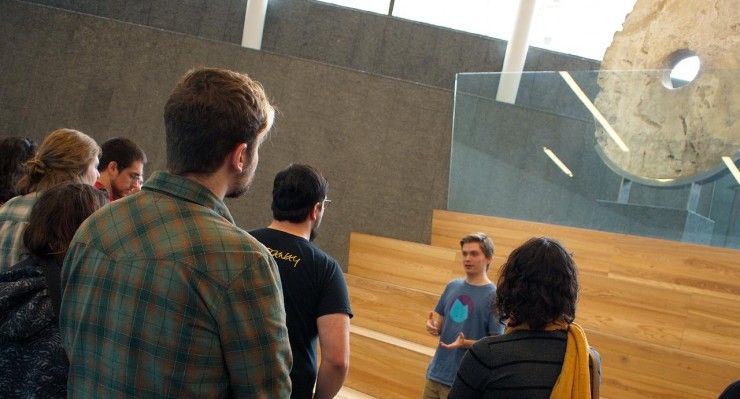 Most tours start at the Yap Stone, a great conversation piece for all things economic.

Our visitors were students from the Curatorial Studies Graduate Diploma Program at Ottawa’s Carleton University. This program seeks to provide emerging curators with a clearer understanding of how exhibition development and museum design proceed in real-world scenarios. Actually, one or two of the students were already curators, but most were graduate students of history, archeology or art history. 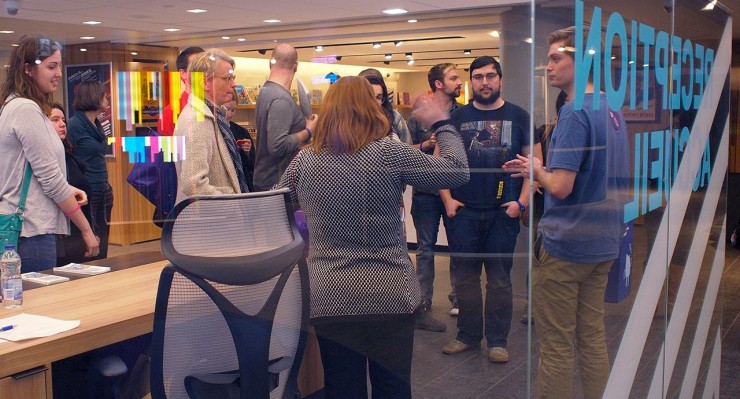 No need to explain public debt to these students; some of them may already have mortgages.

The students had already visited, among other museums, the Canadian Museum of History and Ingenium (the Canada Science and Technology Museum), both of which have recently undergone enormous re-development projects, providing prime opportunities for students to hear directly from the foot soldiers of exhibition and museum development. So we were flattered when our rebuild was included in this initiative. These visits were organized by guest lecturer Trina Cooper-Bolam, a PHD candidate in the Cultural Mediations Program at Carleton. 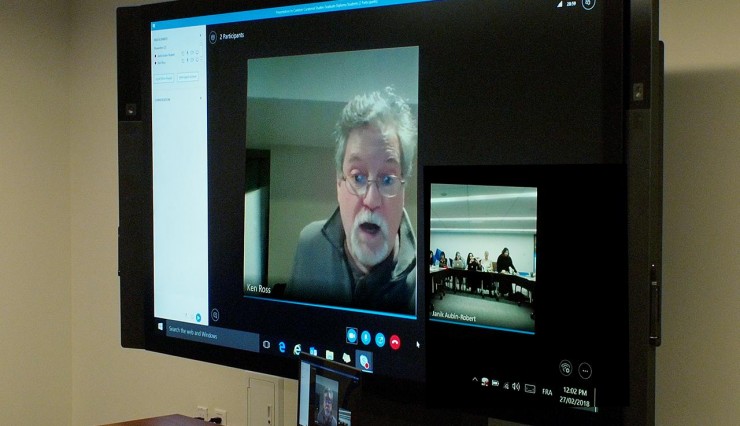 We were able to get a presentation from Ken Ross live on our big monitor.

A cold circulating at the office had just laid low our Director Ken Ross, so his presentation came live from his home via Skype. Ken spoke about the entire process of developing the new Museum from the perspective of the Bank’s communications strategists and the content developers. This led to an overview of the Museum’s extensive use of digital and physical interactives. Students were very interested in the Museum’s choice of using such an interpretive approach to explain the Bank’s functions and the economy. Because it seeks to make very difficult concepts simple, the Museum is akin both to a science centre and a traditional museum. It’s an interesting specimen to study. 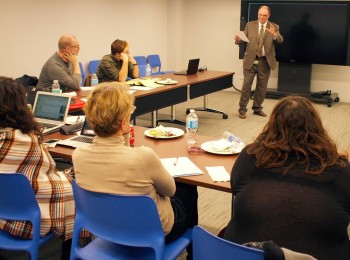 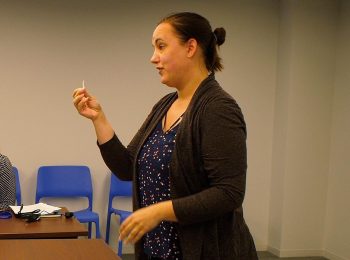 Our Conservator shows a tiny plastic coin holder with an embedded magnet that safely affixes a coin to a showcase wall.

Paul Berry, our Chief Curator, talked about the difficult choices his team had to make about what artifacts to include in our limited exhibition space. With the Museum’s new mandate, many highly informed choices had to be made that split the difference between items critical to the history of money and those that support the economic storyline of each zone. The very practical issues of artifact conservation and display were then dealt with by our dedicated Conservator, Patricia Measures. 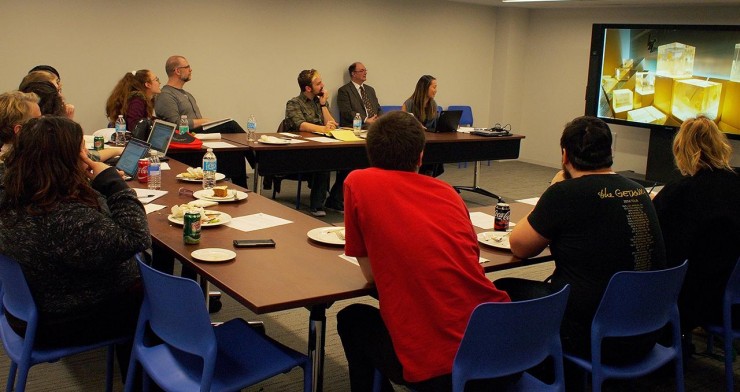 However, the most critical points were made by our Graphic Designer Thu Phan when she took the stage to talk about the interpretive and exhibit development process of the whole Museum. It was from Thu that visitors heard how content could be driven as much by design as it was by curation, underlining the paramount importance of involving the full exhibit team in all stages of development. Every component, from design, to writing, to ergonomics, has a powerful effect on all other aspects of exhibition development—it’s a process every participant must understand is a negotiation.

The visit ended with a tour of the Museum and a chance to get personal with the interactive features. Already there has been talk of a greater partnership with this innovative curatorial program and we find that very exciting. 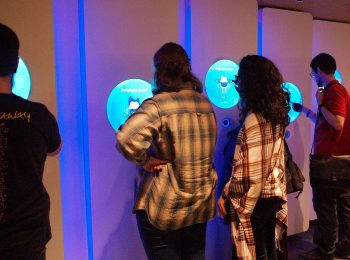 Curatorial students are the only ones likely to take building a cartoon avatar really seriously. 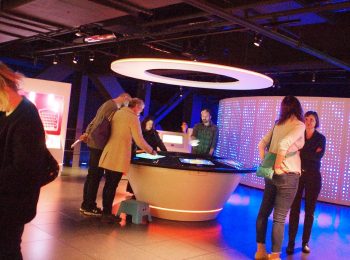 We encourage all our visitors to share with us ideas and the experience of visiting the way these students did.

Though naturally we are aware that the former Museum space is being gutted, the reality of seeing it empty is still pretty strange for most of us here. In the last blog of this series we showed you the empty cafeteria space that will become the new Museum, as well as some images of the old Museum as it was at the time: stuffed with odds and ends of exhibit cases, the occasional display still on the walls.
Content Type(s): Blog Subject(s): About Us
June 23, 2014

With all the blogging we’ve been doing for Voices from the Engraver, you’d think we had nothing else on our exhibition plate. We do, actually, and it’s called CENTimental Journey. This temporary exhibition, hosted at the Canadian Museum of History, walks you through more than 150 years of the Canadian 1 cent piece.
Content Type(s): Blog Subject(s): Exhibitions
June 16, 2014

We are coming up on a year since we closed the doors on the physical museum. During that year, we’ve worked very hard to make sure everybody knows that we are still a functioning museum and one that will be opening its doors again in a few years on a beautiful new space, with an expanded mission and mandate.
Content Type(s): Blog Subject(s): About Us
June 6, 2014

For you as the steward of your collection, your aim is to preserve the items as best as you can by protecting them from further deterioration. The pros call this preservation.
Content Type(s): Blog Subject(s): Collection
May 30, 2014

Going to an Opening

Going to an opening is always exciting. You get to see the reaction of visitors and how other museums treat a given subject - in this case a subject related to our own.
Content Type(s): Blog Subject(s): Reviews
May 26, 2014

The Adventure of Exhibit Planning IV

This exhibition is about engravers, production processes and the beauty of postage stamps and bank notes. In the previous episode of this series we talked about the process surrounding securing the bank notes for this exhibition and how it had to take into account both the needs of the exhibition team and the concerns of the collections department.
Content Type(s): Blog Subject(s): Exhibitions
May 20, 2014

So now you’ve decided that collecting currency is far more fascinating than collecting 14th Century Flemish altar paintings and have begun to accumulate some items. Good for you, those paintings are a bother to dust and currency is far easier to take care of.
Content Type(s): Blog Subject(s): Collection
May 12, 2014

Becoming a Collector I

Collecting things is a very common human urge. Be they matchbooks, pop bottles or 17th century Flemish altar paintings, owning large numbers of the same type of thing is a fascinating pastime for many of us.
Content Type(s): Blog Subject(s): Collection
May 2, 2014

During the planning stages stamping the word ‘final’ on any given aspect of a travelling exhibition can seem less of a directive and more of an overly optimistic suggestion.
Content Type(s): Blog Subject(s): Exhibitions
April 28, 2014

Coming Soon to a Computer Near You

As this blog is the only visible result of change, you might think we are doing nothing much to improve our website. Perish the thought! We’d like you to know that the Museum team has been hard at work for the past year upping the game on our website.
Content Type(s): Blog Subject(s): Collection
April 22, 2014

This month’s selections highlight various areas of Collection development. These include what are called financial instruments: items such as stocks, bonds shares and other articles that represent a contract to deliver money in some manner.
Content Type(s): Blog Subject(s): Collection
April 10, 2014

Show me the Bunny

It seems spring is finally upon us, here in Ottawa (touch wood). I know some of us were thinking, when snowstorms hit at the end of March, that winter would never end. Fortunately the sun is here and that means Easter is not too far away. Mind you, we don’t recommend you take off the snow tires just yet.
Content Type(s): Blog Subject(s): Collection