Programs are springing up at the Museum

The highest prices fetched during Tulip Mania were for tulips afflicted with the mosaic virus which produced flame-like colour variations. Wikimedia: Gottorfer Codex

Aligning our programming with local community events has so far been a winning plan for us. Located where we are, next door to the Parliamentary Precinct, means we can’t help but be in the middle of all sorts of Ottawa festivals and events. We often benefit simply from increased foot traffic. The National Capital Region is host to some sixty-plus festivals, celebrations and major events and, while choosing which of these to align ourselves with can sometimes be a challenge, it is never hard to make the annual decision to throw our lot in with the Canadian Tulip Festival. 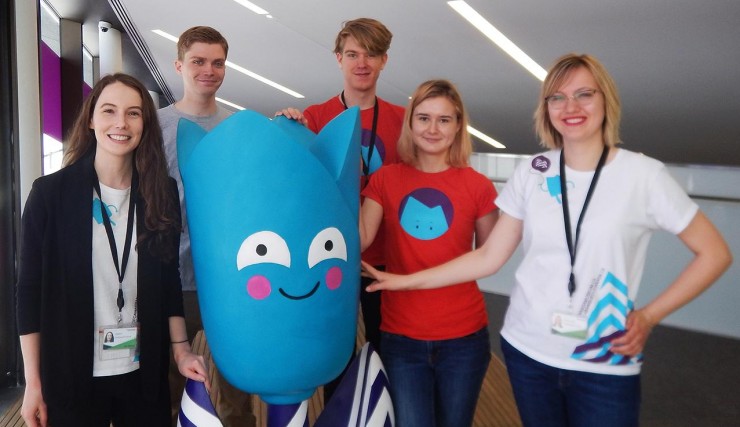 Our in-house designer spent a day in her garage painting a big plastic tulip. It’s the only sort of flower our conservator would allow in the Museum.

You might wonder why a flower festival is a good fit for an economy–themed museum. So glad you asked!

In the mid-sixteenth century, the tulip had come to the Netherlands from Turkey and the Dutch fell in love with the flower. By the early seventeenth century, Dutch love for the tulip had become more of an obsession. The prices at tulip markets rose to ridiculous levels and more and more people bought tulips in the hope of selling and turning a profit on a steeply rising market. A classic economic bubble developed, peaking in 1637 when a bulb of a sought-after variety could be sold for the price of a nice Amsterdam house. Naturally, the bubble burst and many speculators were ruined as the price of a bulb crashed to that of an onion. For our programming this May, we used the tulip as a springboard to show visitors all the curious things in our collection that have been used as money in the past. 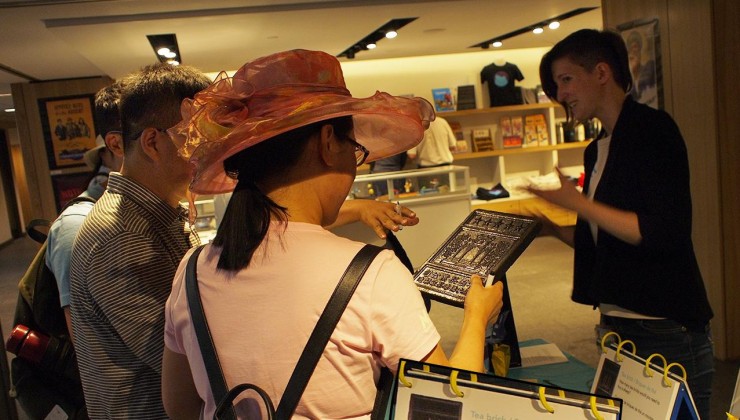 Visitors tried their best to put themselves in the shoes of historic consumers.

In “ComODDITY,” visitors played a historic version of “The Price is Right,” guessing the values of items as expressed in terms of beans or shells. How many cocoa beans would an Aztec household need to buy a chicken? I’ve no idea either. It turned out to be a fun challenge for visitors who learned to recognize that forms of money evolve within a social context. Whether a dollar or a bean, money has value when a society agrees it has value.

One of our intrepid guides leads a tour to discover some pretty weird money. 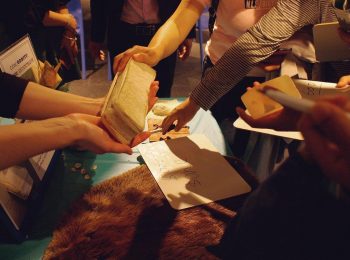 Providing things to touch is becoming very common in modern museums as they adapt to new research into how people learn.

In a 40-minute tour called “I Can’t Believe It’s Currency,” our guides presented highlights of the collection that could best be described as currency curiosities. Visitors learned about beads, salt, tea, shells and the innumerable pieces of metal of all shapes that have been used for trade, purchase and investment in the last few thousand years. We have reproductions of some of these items and people got a chance to hold and feel these odd objects. 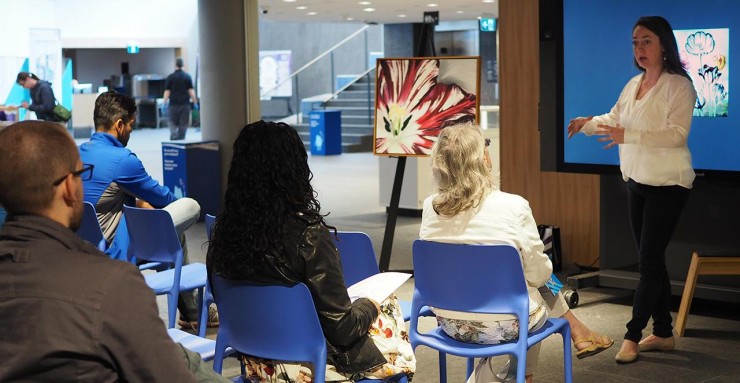 Monique Martin has been an arts educator for many years, giving workshops all over the world while maintaining her own arts practice and fulltime teaching position in Saskatoon, SK.

For those who wanted to stay with the tulip theme, we offered origami tables where you could make your own tulip from paper. Monique Martin, Tulip Festival Featured Artist, dropped by to give a mini workshop on origami flowers. Lots of kids (and adults) left with their very own hand-made paper tulips as souvenirs of their visit and maybe their Canadian Tulip Festival experience.

Of course our origami paper looks like bank notes.