During a recent trip to the United Kingdom, I had a couple of pilgrimages to make to museum destinations that have always held a fascination for me. One was conveniently near Oxford, where we were staying. Bletchley Park, the British home of the Allied codebreaking effort during the Second World War, was a mere 40-minute drive away. (Yeah, “mere” if you happen to live there and drive on the left every day.) 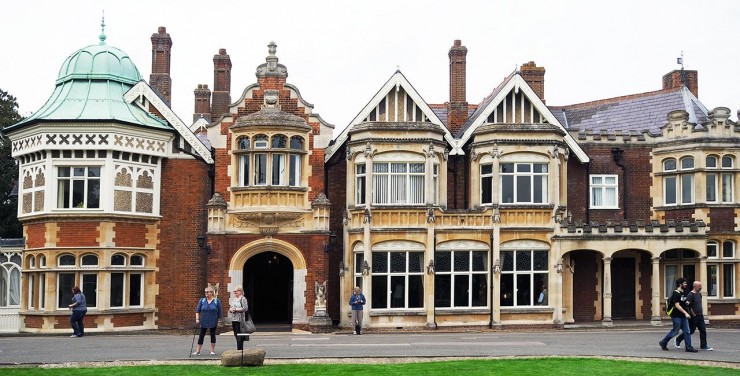 The (extremely) Victorian manor house was Bletchley Park’s headquarters. It has 17 recognizable architectural styles in its bizarre design.

Many of you may be familiar with Bletchley Park, having seen The Imitation Game, the very good film about the Park’s star codebreaker, the great Alan Turing. Until the mid-1970s, Bletchley Park’s activities and all who contributed to them, including Turing, were deeply buried state secrets. However, with the secret declassified, much of the Park has been restored and opened to the public as an interpretive centre and museum. I was itching to go there. Risking serious complaint, I dragged my partner’s 11-year-old daughter along with me. 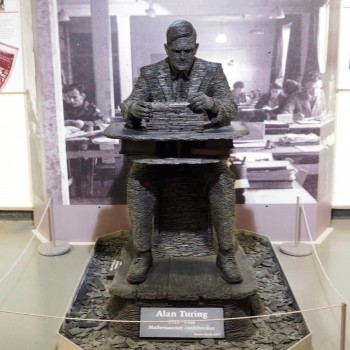 Sculpture of Alan Turing by Stephen Kettle. It is made entirely of stacked slate pieces. 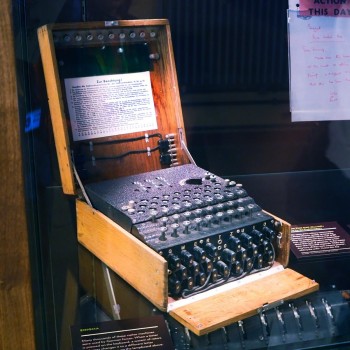 The interpretive centre in the formerly named Block C is a first-class bit of design. Every aspect of it is reminiscent of military buildings of the era, from the graphics to the light fixtures to the doors and even the washrooms. Here, you are given a basic overview of the reasons for Bletchley Park’s existence and its general efforts. The Park’s interpretation relies a lot on projected video, and the introductory film was shown on a number of surfaces in the first gallery. I could have trawled through the initial galleries for an hour or more, but with a child, I needed to move fairly quickly. However, the young one showed a quick interest in the concepts so I was able to blather at her about the German Enigma encoding machine and how it worked. Basically, it is a sort of typewriter with a set of wheels that, via electronic circuitry, change each letter typed into a different letter a number of times before the message is sent out in Morse code. To decode the message, the operator at the receiving end needs to know the position of the wheels on the sender’s machine. Sadly, despite my fascinating banter, my young companion’s eyes soon began to glaze over so it was time to head out and start the tour.

We each picked up a hand-held audio/video tour device (iPods), which really saved the day. Bletchley Park has produced a top-notch tour program for families (kids, really): a series of short black and white videos featuring a young woman playing a cheery and witty Bletchley staff member (the vast majority were women). She told the story of Bletchley and its culture in such a fun and charming manner that even I chose her over the adult program. When things got a bit dull for an eleven-year-old, as they frequently did, she could turn to her iPod to watch a video and solve the little cryptographic puzzles that followed each. 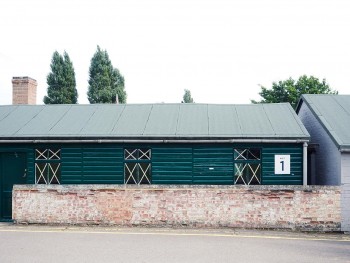 One of 11 “huts” open on the site. Hastily thrown up, poorly heated and shabbily furnished, they were the daily workspaces for thousands of wartime employees. 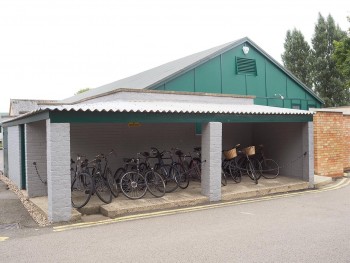 Many Bletchley Park employees would have cycled to work from nearby Bletchley and surrounding villages. 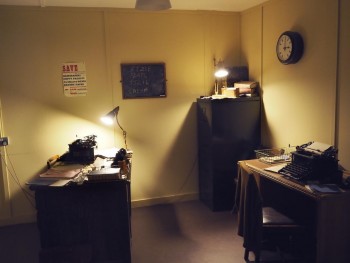 The huts are sparsely furnished with scruffy chairs, tables and prop artifacts; reflective of the makeshift circumstances of the era.

Bletchley Park’s grounds and the huts (simple, barracks-like buildings) housing each codebreaking section are a bit sparse and need to have the blank spaces filled with commentary and oral history. That’s why, when you visit, you really should go on a group tour or take the self-guided video tour. Much of the furniture and other contents of the huts are probably long lost. Most spaces feature a desk or two, file drawers and a cleverly projected video dramatizing what went on in those rooms. Nevertheless, apart from trying a few fun interactives, you can absorb the friendly but makeshift war-time atmosphere and get a sense of the purpose and drive of the Park’s inhabitants. You just need to wait for a break in the crowd flow for, even on an autumn weekday, the place was busy. And when you are outside wandering the grounds, keep your ears open for the atmospheric audio tracks playing throughout. I kept looking up to the sky at hearing what I knew to be the engine of a Second World War aircraft before I realized it was a recording. 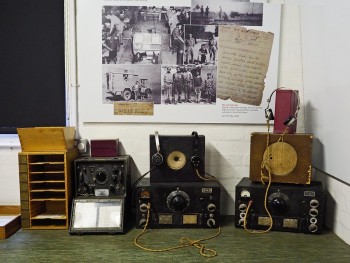 Radio receivers like these were used in the field to intercept German messages. 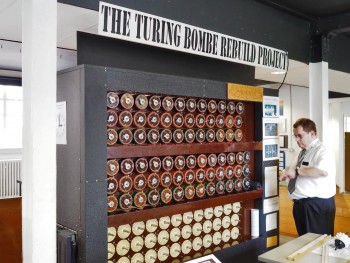 Block B houses a reproduction Bombe machine. Here it is, complete with a nerd. Fascinating. 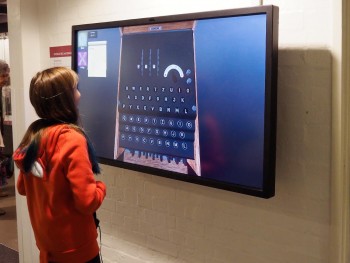 A young codebreaker sets up her digital Enigma to send a coded message. It was something about cows.

The meat of the traditional museum experience is found in Block B. Here you will see vintage radio sets, encrypting teletype machines, more Enigma machines and a working reproduction of the “Bombe.” No, it isn’t a chocolate dessert or something you put in your bathtub. In a nutshell: the Bombe was a big machine that, in imitating the actions of a few dozen Enigma encoding machines, was used to help discover Enigma code settings. When codebreakers felt confident that they knew the German words corresponding to a line of coded characters, the Bombe would be wired up to mimic this combination. The multiple sets of three wheels would cycle though all possible combinations of positions until they hit on the combination that produced readable text from the coded text (I think). The final position of the Bombe’s rotor wheels would indicate the way the wheels of the Germans’ Enigma machine were set up and, after tests to determine a few other settings, all messages for that day could then be decoded. Anyway, a group of dedicated nerds built one of these machines from scratch and it works for real. They give demonstrations several times a day and, though a bit brain twisting, one is surely worth the time.

I could have happily spent all day at Bletchley Park, but at a minimum, you need to budget three hours. Take your lunch and have it by the pond at the manor house and listen for the train whistles and bike bells and the phantom aircraft of the Bletchley atmosphere.

Operation Fish was the largest movement of physical wealth in history.
Content Type(s): Blog Subject(s): About Us
April 18, 2018

To distinguish the new production from that of 1936, a small impression was added to the reverse dies, creating a raised dot on coins struck from those tools.
Content Type(s): Blog Subject(s): Collection
March 27, 2018

During the break for the English school board, the Bank’s Currency Department teamed up with the Royal Canadian Mounted Police (RCMP) to give visitors a chance to handle some modern counterfeit bank notes.
Content Type(s): Blog Subject(s): News & Events
March 14, 2018

The Bank-NOTEable Woman is Here!

Even if you’re not familiar with Viola Desmond’s story, it will likely become clear that the theme of this note is human rights and social justice.
Content Type(s): Blog Subject(s): News & Events
February 27, 2018

So we decided to provide some winter-themed indoor activities for families out and about during Winterlude who’d like to either warm up or lessen their disappointment at not being able to skate.
Content Type(s): Blog Subject(s): News & Events
January 30, 2018

Now you might wonder just how a museum specializing in economics and currency expects to interpret the history of a legendary arctic explorer—through money, of course.
Content Type(s): Blog Subject(s): Exhibitions
January 3, 2018

Now that we are again back in our house, we’ve invited one of our wandering exhibitions home for a visit: Decoding E-Money.
Content Type(s): Blog Subject(s): Exhibitions
December 19, 2017