Our star feature is up and running

When we opened last July, one of the most impressive features of the entire Museum was not fully functioning—and none of the visitors had any idea. I’m talking about our six-and-a-half metre-long video wall. Yes, the very slick promotional video for the C150 bank note was running on it, but in terms of the wall’s potential, it was a bit like using an iPad as an alarm clock. That’s because this video wall is actually a touch screen, backed by all the capability of any computer, database or content management system you choose to hook up to it. It’s basically an enormous digital tablet—the biggest one you’re likely to find anywhere in Canada. This granddaddy of touch screens is there for visitors to experience the Collection like they’ve never experienced artifacts before—with a “Hey, I wanna try that!” appeal that is magnetic.

Most of the wall’s current artifacts can be seen at once in the “Collector’s Dream” category. They slowly creep upward to reveal more.

We have so far installed content for 400 artifacts and that content is accessed in a simple and, for most of us under 50, familiar way. Images of dozens of artifacts cover the 64 LED tiles that make up the wall’s surface. You touch an artifact that interests you and “drag” the image into one of six viewing zones that appear when the wall is touched. Once the image is inside a zone, written content pops up and the image becomes live. Tapping arrow buttons allows you to scroll through multiple views of the artifact and read the content. Then, using standard tablet gestures, you can enlarge the images and explore the items in wonderful detail. You will notice some of the artifact images lazily rotating. Those images are produced in 3D and you can revolve, flip and twist them around as if handling the artifact itself. The only thing missing is the feel of the object. 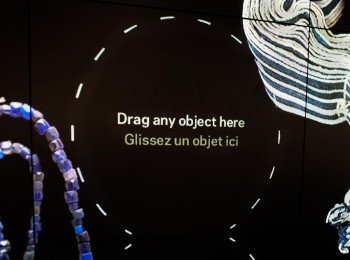 When you touch an object, viewing zones appear that you drag the object into. 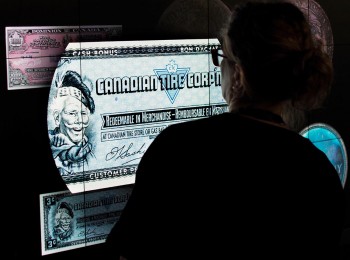 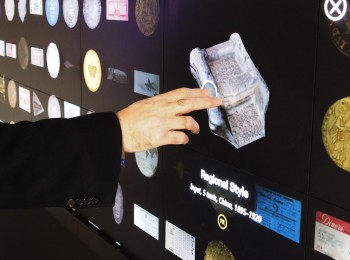 You can rotate 3D images of objects in any direction and zoom in at any position.

Information and zoomable images of every artifact on the wall are also available on the digital labels in the Museum. The big advantage the wall has over the labels is the random way you can navigate through the artifacts. You can respond to impulsive curiosity and explore whatever catches your eye, no matter if it’s a coin, piggy bank or cheque. This randomness is a key feature of the wall as an interpretive tool.

When we first discussed installing a touch wall back in 2014, we didn’t have a clear idea of exactly how visitors would access the content. Inspired by the spectacular ArtLens Wall of the Cleveland Museum of Art, we just knew that such a wall had amazing potential as a visitor draw and means for displaying the Collection. We left it to our very creative exhibit developers to come up with novel ideas on interactive exploration, while we went off to gather content.

When you engage an origami creature, it unfolds to reveal a bank note featuring an animal.

What our developers provided was a series of modes that the wall cycles through. A simple grid shows nearly all the artifacts at once and a few smaller grids are organized by colours or shapes. But then there are three modes that are just plain fun. There is the origami screen, where bank notes appear folded in animal shapes that unfold before your eyes. In another mode, visitors dust off dull grey items to reveal their bright colours. The most fun is the treasure-themed mode, where a couple of dozen coins, such as doubloons and pieces of 8 (old Spanish money), appear on the wall. Just when you think that it is merely a theme, the coins suddenly fall into a heap at the bottom of the screen. You have to drag coins from the heap up to the viewing zones and it’s then that you might discover you can toss them from one area to another and even play catch with another visitor. Learning is fun. 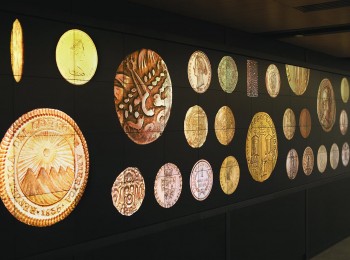 A treasure trove of modern and ancient precious metal coins hover in front of you before they collapse to the bottom of the screen. 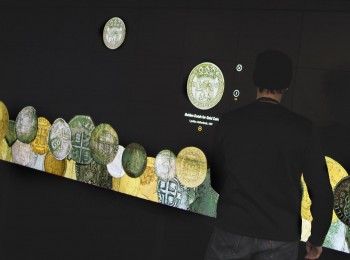 A visitor has “tossed” a coin up from the heap of pirate treasure.

The wall is all about accessing the Collection in ways that appeal to seldom-used physical, cognitive learning styles. It’s about involving people in how they experience the artifacts. It’s about piquing curiosity and revealing interests visitors may not have even suspected they had. Yes, it’s about learning but, let’s face it, it’s also about fun. 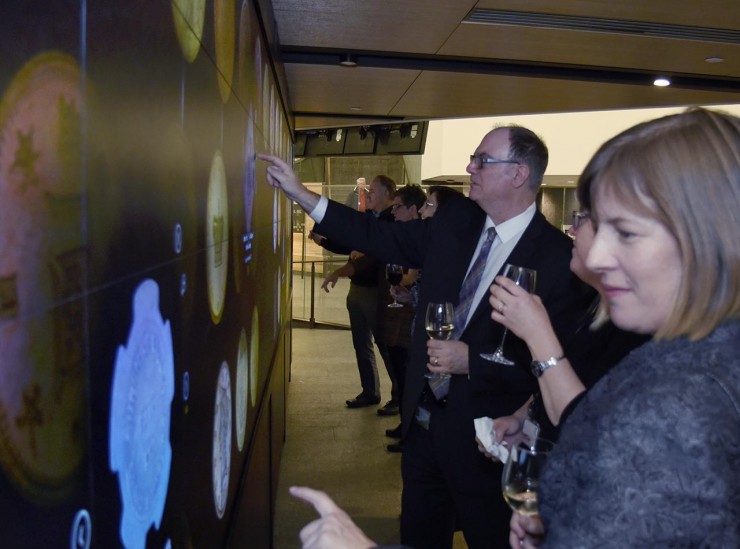 Up to six visitors can manipulate the wall at one time.