What the Harry Potter films have done for British heritage

Imagine your kids nagging you to visit a great cathedral or whining, “Kevin’s family got to go on a walking tour of Oxford, why can’t we?” Oddly enough, this scenario may not as far‑fetched as it sounds.

Durham Cathedral, Alnwick Castle, Gloucester Cathedral, Oxford University, Lacock Abbey, Hardwick Hall and the Scottish Highlands are all places that have no doubt had a boost in tourism from being Harry Potter film locations. Not that any of these sites were likely suffering from a lack of tourist attention, but it’s always difficult to get young people excited about such venues. Instilling an interest in history and museums in the minds of children has never been an easy task—but then Harry Potter came along. 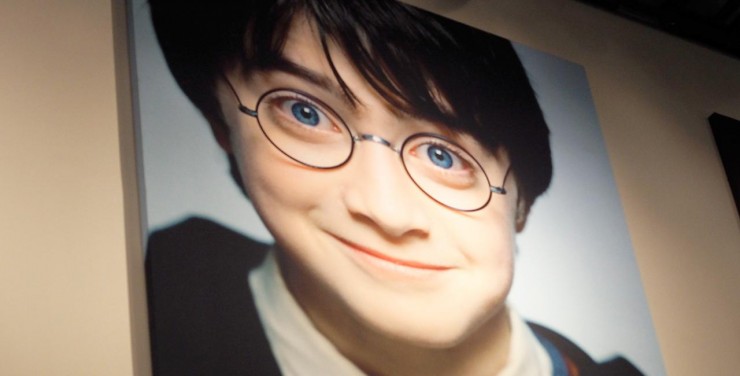 He looms large in the psyche of an entire generation. The Harry Potter films have created some serious tourism in the United Kingdom.

Cynically, I suspect that a fair portion of Harry Potter fans have never read the books, so of course I’m talking about the movies. The films have, forgive me, a magical effect on their young fans, encouraging them to fantasize not only about adventure but of empowerment. For kids (and middle-aged kids) to be able to place themselves in Snape’s dungeon or the halls and courtyards of Hogwarts Castle is just so much fun. And, apart from vandalism, anything that gets teens and preteens interested in heritage sites is a good thing. Along the way, they may begin to appreciate ancient architecture, atmosphere, beauty—things far more lasting than a rollercoaster’s thrill. The Harry Potter films are a gateway drug for interest in history itself and the British tourism industry is all over it. 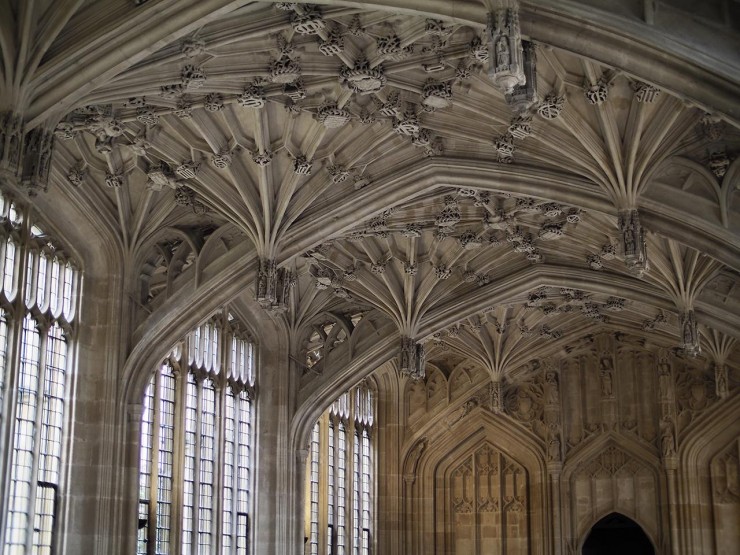 The ceiling of the Bodleian Library Divinity School, Oxford: you may recognize it as the Hogwarts Infirmary. 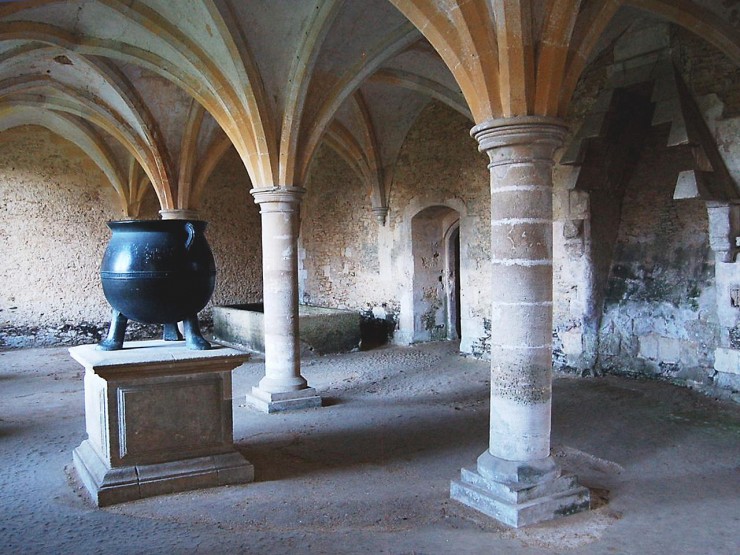 The vaults under Lacock Abbey in Wiltshire were the original location of the potions classroom and the model for the future set. 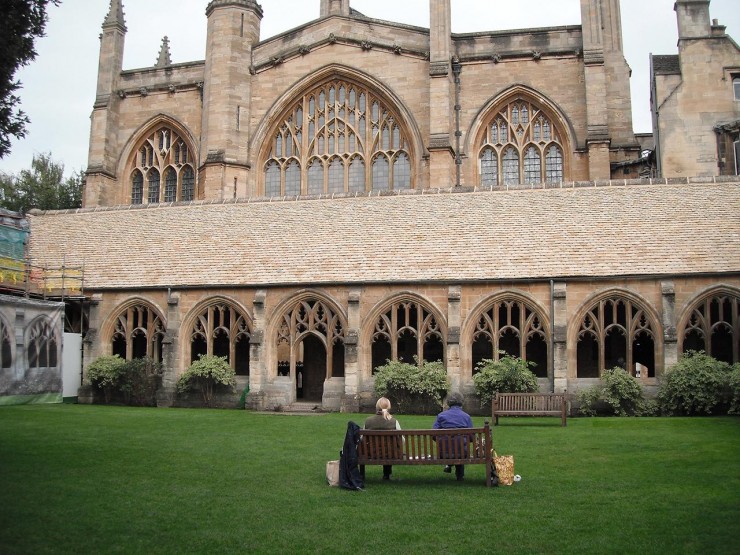 The place where Mad-Eye Moody transformed Draco Malfoy into a ferret is also known as the New College cloisters, Oxford.

As adults taking an 11-year-old on a short trip to England, this was not lost on my partner and me. “How to entertain the child,” was a constant concern, but this young lady’s fascination with Harry Potter saved the day. If we could promise her a Potter location, she’d happily trudge around a rainy medieval city or wander the cloisters of an ancient abbey, each time discovering all sorts of things beyond her expectations. Having done that, we still dangled before her the ultimate juicy carrot: a visit to the Warner Bros. Studio Tour London. On Greater London’s northernmost edge, this complex is where all the Potter films were made. 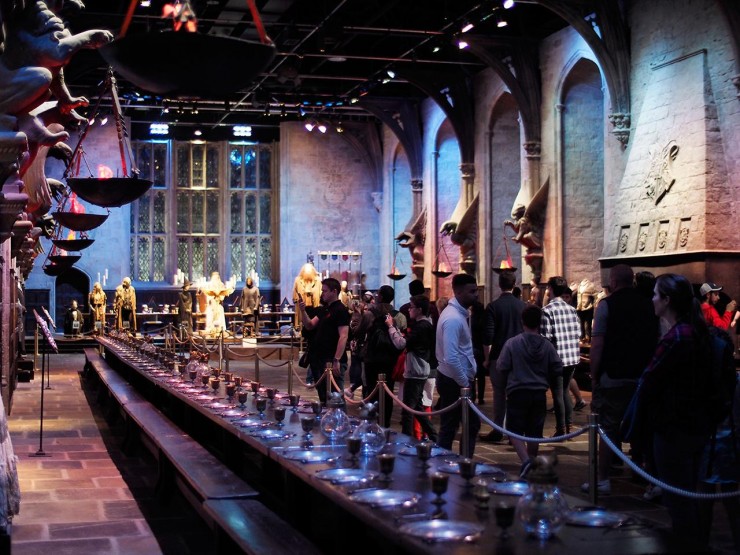 The Great Hall’s charmed ceiling is mostly digitally produced. The ceiling’s scale model can be seen in the next zone. 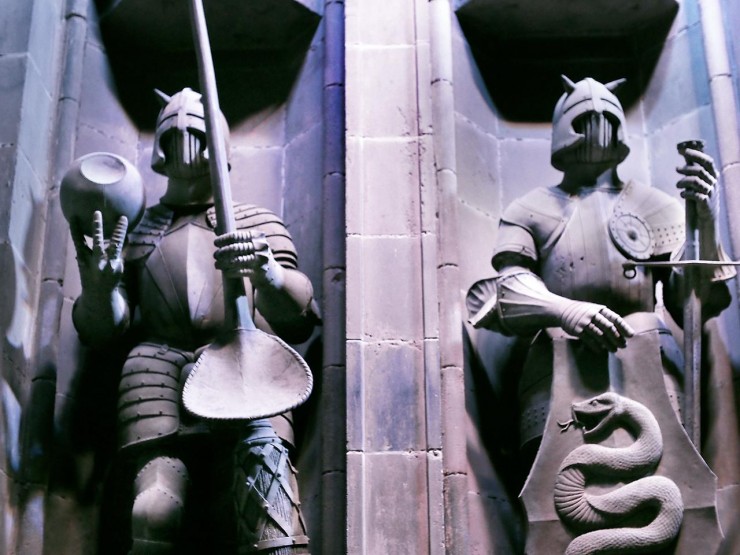 Did anybody notice that one of the suits of armour guarding the Great Hall is a quidditch player? There is a wink and a giggle in every prop from these films. 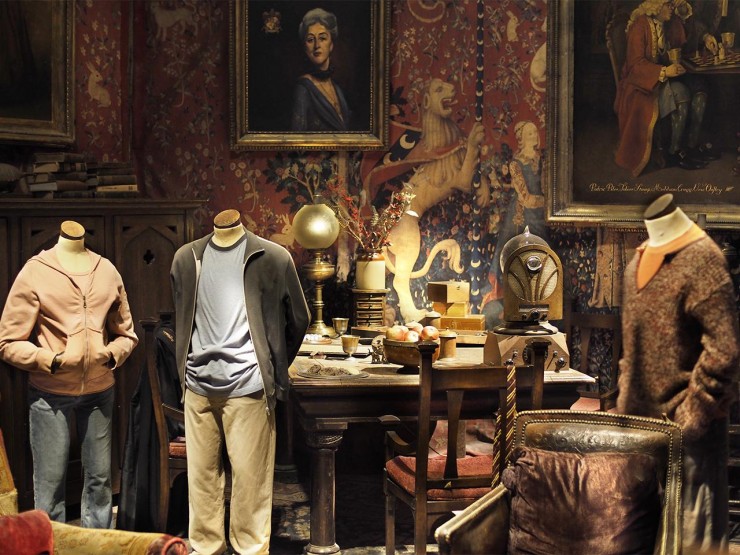 The wallpaper of the Gryffindor common room is a reproduction of the 16th-century French tapestry 'Lady with a Unicorn.'

For my money, and the admission cost a whole heck of a lot of it, this place really is a museum. Unlike the franchised Harry Potter experiences, this exhibition is in the actual studio complex, complete with the original sets, props, costumes and animatronic monsters from all the movies. It was, in all six definitions of the word, fantastic. Every prop and set was designed as if it were to be subjected to the most careful inspection and each came supplied with a wonderful whiff of humour. You cannot begin to appreciate the creative imagination, the astounding craftsmanship or the insane detail involved in these props by merely seeing a Harry Potter film—even in a theatre. The mind reeled at the minutiae of items like a fully annotated Ministry of Magic employee ID card or the hundreds of uniquely labelled boxes in Ollivanders wand shop. This staggering depth of detail would seem unnecessary in the grand scheme of the films’ art direction, but it all weaves a subliminal tapestry that gives the whole series its deep, rich atmosphere. 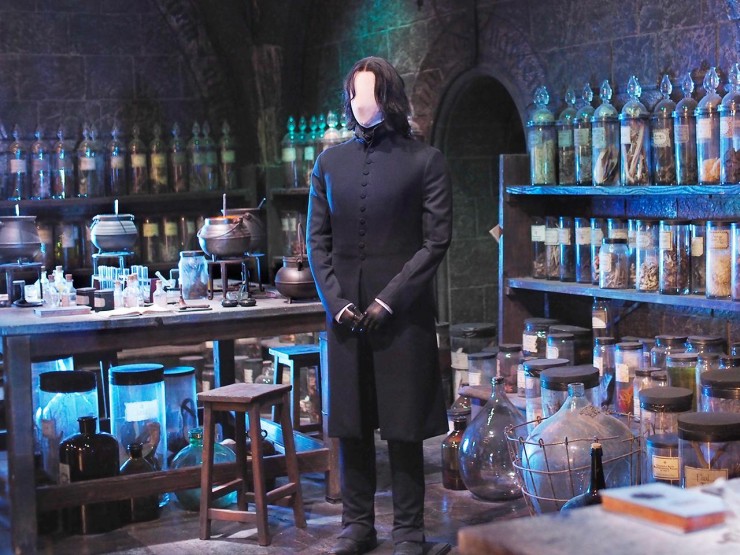 All of the hundreds of jars of magical ingredients in Snape’s potions class are uniquely labelled and filled with all sorts of repulsive gunk, stuff, odds and ends… 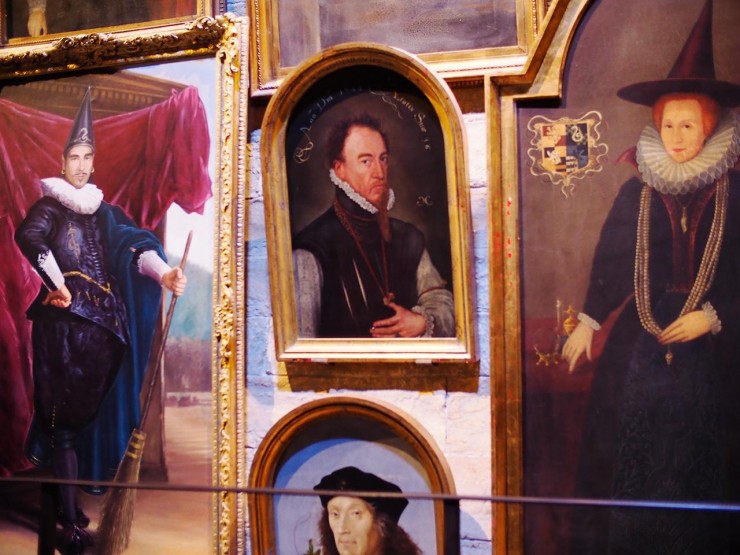 The dozens of portraits around Hogwarts were all hand-painted, individual works of art. Many of the models were the films’ producers and crew members. 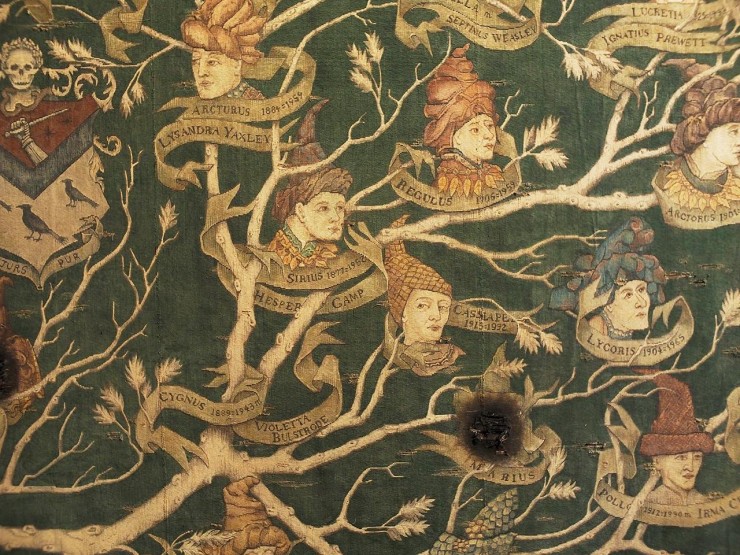 The appearance of this prop “tapestry” was so compelling that J.K. Rowling herself invented generations of Sirius Black’s family so the artist could fully populate the Black family tree.

As for the sets, they’re all a bit overwhelming. The major interior locations plus some exterior ones are there with all the trimmings. Of course, you can visit Platform 9¾ and board the Hogwarts Express, but the last exhibit is the most exciting of all. I had to physically restrain the girl from spoiling the surprise for her mother: the 1:24 scale production model of Hogwarts Castle, in all its clinically obsessive detail. Even when you know it is there in the next gallery, it will still leave you, in the local vernacular, absolutely gobsmacked when you see it. 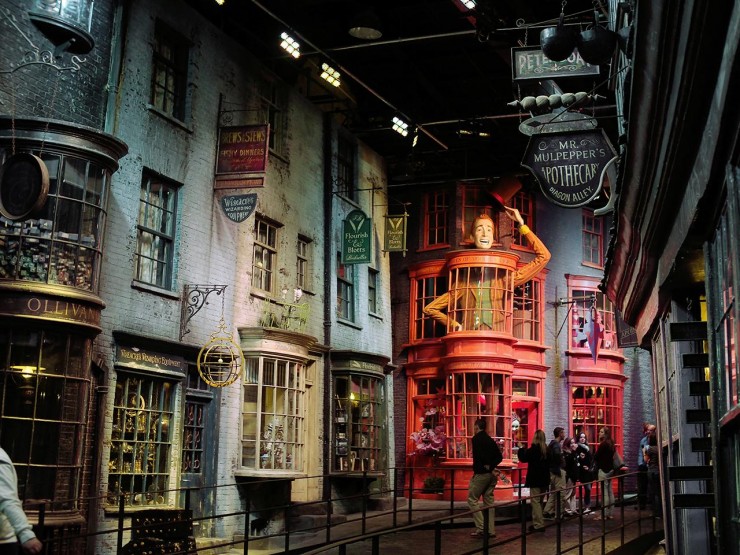 The set for Diagon Alley is smaller than it looks on film but is still an endless delight to visit in the flesh. 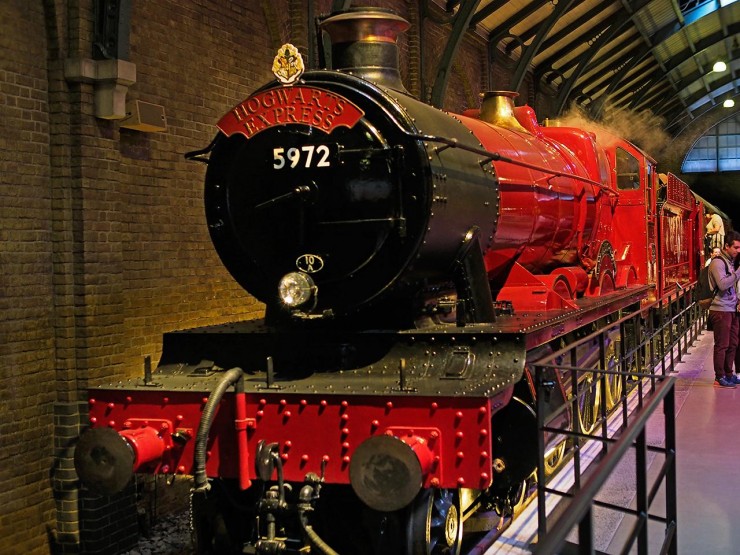 For you train nerds: the Hogwarts Express is a fully functional Great Western Railway 4-6-0 Hall Class locomotive built in 1937. 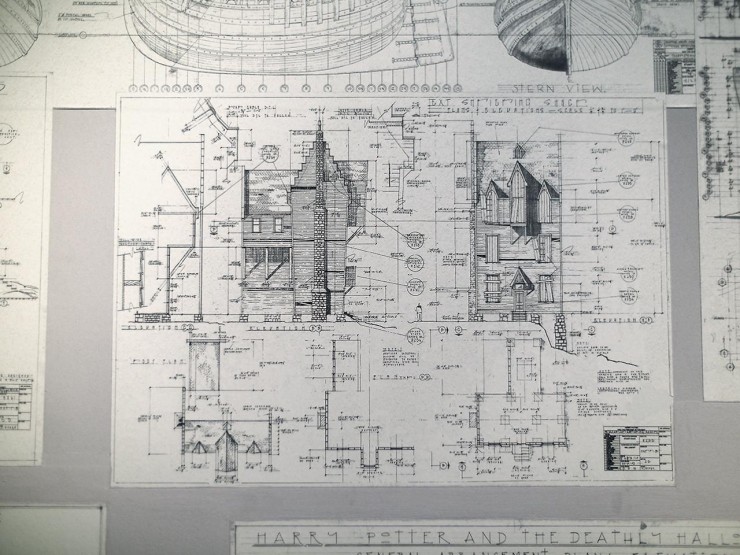 A wall of plans shows that even buildings with a slapdash appearance were carefully and professionally designed.

Such a tsunami of evocative creativity demands a deep and broad historical knowledge—and this is what’s behind the genuine believability of the props and architecture on show. So, when your kids are beside themselves with excitement to be standing in the Hogwarts Great Hall, they are surrounded by the repurposed relics of history. I believe that such details can leave a trace, implanting a latent interest in the past—even if that suit of armour over there is holding a quidditch broom. 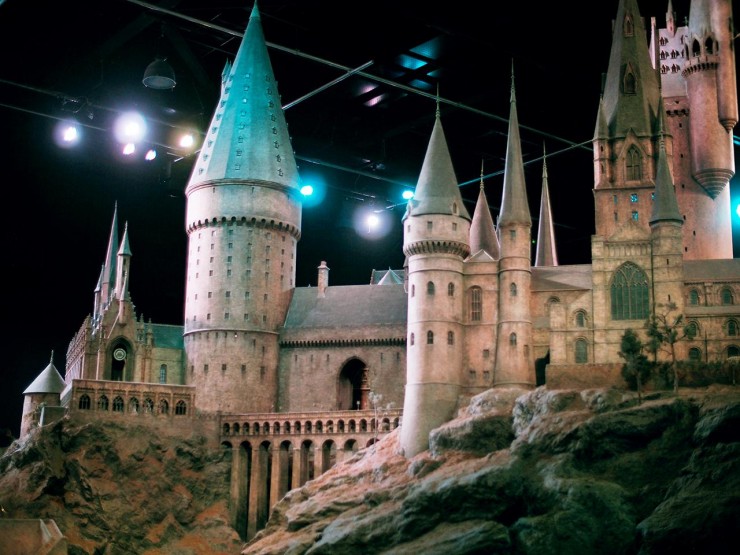 At 1:24 scale, the endlessly fascinating Hogwarts Castle production model covers the area of a tennis court.

The Adventure of Exhibit Planning IV

This exhibition is about engravers, production processes and the beauty of postage stamps and bank notes. In the previous episode of this series we talked about the process surrounding securing the bank notes for this exhibition and how it had to take into account both the needs of the exhibition team and the concerns of the collections department.
Content Type(s): Blog Subject(s): Exhibitions
May 20, 2014

So now you’ve decided that collecting currency is far more fascinating than collecting 14th Century Flemish altar paintings and have begun to accumulate some items. Good for you, those paintings are a bother to dust and currency is far easier to take care of.
Content Type(s): Blog Subject(s): Collection
May 12, 2014

Becoming a Collector I

Collecting things is a very common human urge. Be they matchbooks, pop bottles or 17th century Flemish altar paintings, owning large numbers of the same type of thing is a fascinating pastime for many of us.
Content Type(s): Blog Subject(s): Collection
May 2, 2014

During the planning stages stamping the word ‘final’ on any given aspect of a travelling exhibition can seem less of a directive and more of an overly optimistic suggestion.
Content Type(s): Blog Subject(s): Exhibitions
April 28, 2014

Coming Soon to a Computer Near You

As this blog is the only visible result of change, you might think we are doing nothing much to improve our website. Perish the thought! We’d like you to know that the Museum team has been hard at work for the past year upping the game on our website.
Content Type(s): Blog Subject(s): Collection
April 22, 2014

This month’s selections highlight various areas of Collection development. These include what are called financial instruments: items such as stocks, bonds shares and other articles that represent a contract to deliver money in some manner.
Content Type(s): Blog Subject(s): Collection
April 10, 2014

Show me the Bunny

It seems spring is finally upon us, here in Ottawa (touch wood). I know some of us were thinking, when snowstorms hit at the end of March, that winter would never end. Fortunately the sun is here and that means Easter is not too far away. Mind you, we don’t recommend you take off the snow tires just yet.
Content Type(s): Blog Subject(s): Collection
April 3, 2014

In early February, a small group from the Bank’s Communications Department booked a brief tour of the main floor and first basement at the Wellington Street head office. It’s still in the demolition phase of the renovation.
Content Type(s): Blog Subject(s): About Us
March 28, 2014

Notes from the Collection: Notgeld, Emergency Money from Interwar Europe

Notgeld, German for emergency money, first appeared at the beginning of World War One and was issued until 1924. Through these notes we can see the entire story of Germany’s experience with out-of-control inflation between the wars.
Content Type(s): Blog Subject(s): Collection
March 20, 2014

Upon entering Gallery One, you may see somebody standing on one leg and waving her arms in front of a flat screen. Should we call security? Nope. Here’s what happens next: a camera takes a picture of her, digitally compares the image to images stored in the museum’s collection, and comes back with an image of an artwork that most resembles this pose.
Content Type(s): Blog Subject(s): Reviews
March 12, 2014

One of our museum development team and his partner chose to spend part of their Christmas holiday in sunny Cleveland. It wasn’t for the beaches that they went to the rusty shores of Erie but to enjoy one of the most advanced interactive museum experiences available anywhere.
Content Type(s): Blog Subject(s): Reviews
March 4, 2014

On 19 February our newest travelling exhibition In the Money left the Ottawa area to start its journey across Canada. This will be an exciting adventure, not only for us at the Currency Museum (nervously monitoring its progress from afar), but also for the visitors who will learn more about our currency, its history and the technology behind it.
Content Type(s): Blog Subject(s): Exhibitions