Commemoration for all of us

As you enter the exhibition, your shadow is projected among the men going into battle. I’m the guy waving his arms.

The Canadian experience of the First World War is one of my pet historical interests, so naturally, I was excited that the Canadian War Museum (CWM) was mounting a major exhibition on the Battle of Vimy Ridge this summer. Since I had every intention of seeing it, I was more than usually lazy about reading the description of Vimy–Beyond the Battle. Expecting a well-executed, traditional historical exhibition, I was taken aback to discover that it was not about the battle at all but, rather, was about commemoration: how (and why) we commemorate and what Vimy means to us as Canadians. 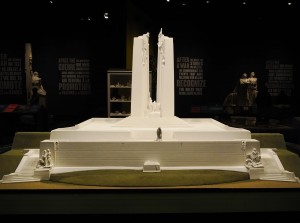 One of Walter Allward’s maquettes, or models, of the Vimy Memorial. 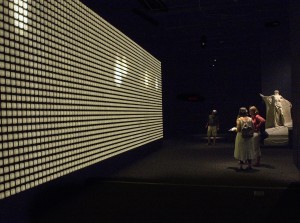 Visitors and their halos at the wall of Vimy’s dead. 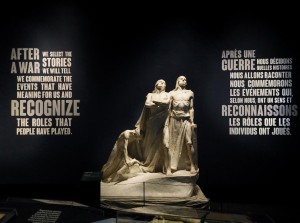 Reasons for commemoration and what it does for us are scattered over the walls of the exhibition.

Entering the exhibition, you travel down a dark hallway. Moving images of soldiers going into battle are projected on one wall. Stop for a moment and you’ll see your own shadow overlaid on top, drawing you into the illusion. Once inside the exhibition proper, you’ll notice a great wall of white, backlit tiles to your right. Each tile represents one of the 3,598 Canadians who died at Vimy Ridge. As you stand before the wall, again, you become projected upon it as cubes light up in your shape like a negative shadow. It’s a core concept of this exhibition: that commemoration is a two-way street and we are all involved in history making. 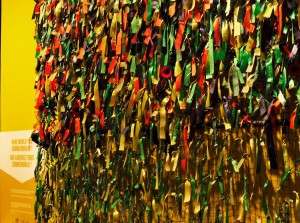 Visitors are invited to make their own commemoration with ribbons and pencils, to preserve their own private memories. 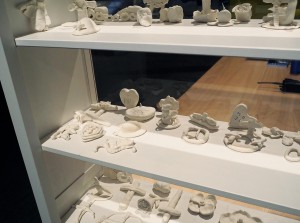 Kids (and adults) had a good time making their own memorial sculptures from modelling clay. 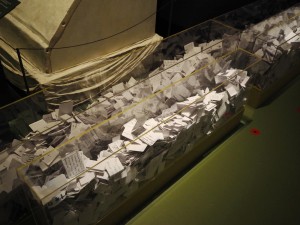 Young visitors have left hundreds of messages of thanks and commemoration.

This is an important exhibition. On one level, it brings to light some of the quiet mechanisms that operate behind our Canadian identity but, more broadly, it is an exploration of the ways and means we adopt, as individuals and as a nation, to memorialize. In this exhibition, Vimy is explored not as a battle but as a site of commemoration and a symbol. And just as the Vimy battlefield became a place upon which Canadians overlaid many memorials of sacrifice and even ideas of nationhood, the CWM has used Vimy’s memorialization as a foundation for its exploration of commemoration. 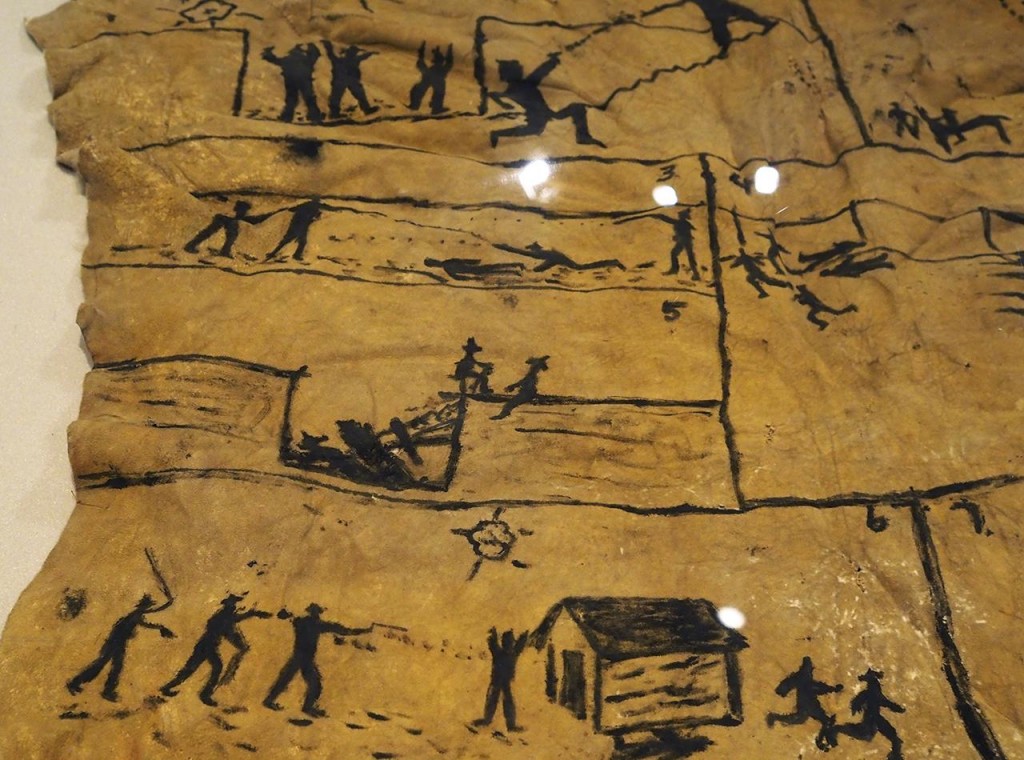 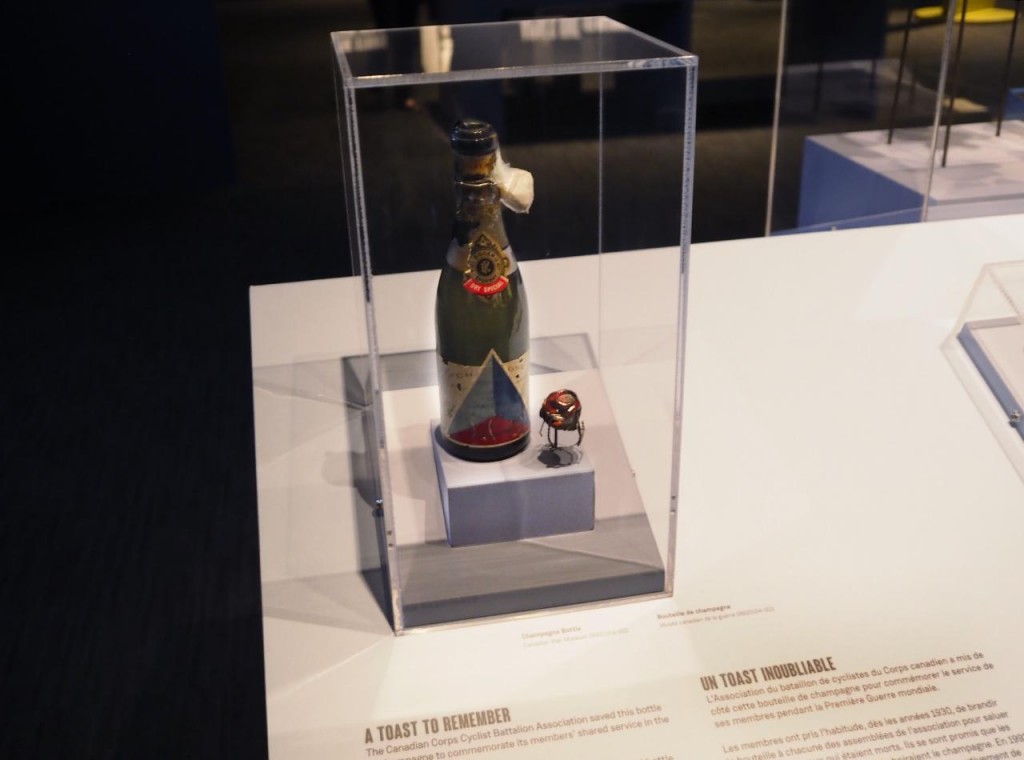 To honour their fallen comrades, soldiers from one batallion raised this bottle of champagne at reunions, but pledged that only the last two survivors would consume the contents.

For most of us, war commemoration comes in the form of the stone cenotaph seen in every town square from Sydney, NS to Sidney, BC. But as this exhibition shows us, commemorations come in as many forms as there are people who enact them. Battlefield artifacts, privately published reminiscences, a bottle of champagne, stained glass and even money are all presented as examples of tools we have used to help us not to forget. For some, memorializing is not an abstract notion. One of my fellow visitors to the exhibition was a large man with a tattoo of poppies and the words “lest we forget” on his shaved head. He was a walking, talking war memorial illustrating that commemoration can be deeply personal. Throughout this exhibition there are a number of opportunities for visitors to create their own memorials, to connect with the past as individuals. 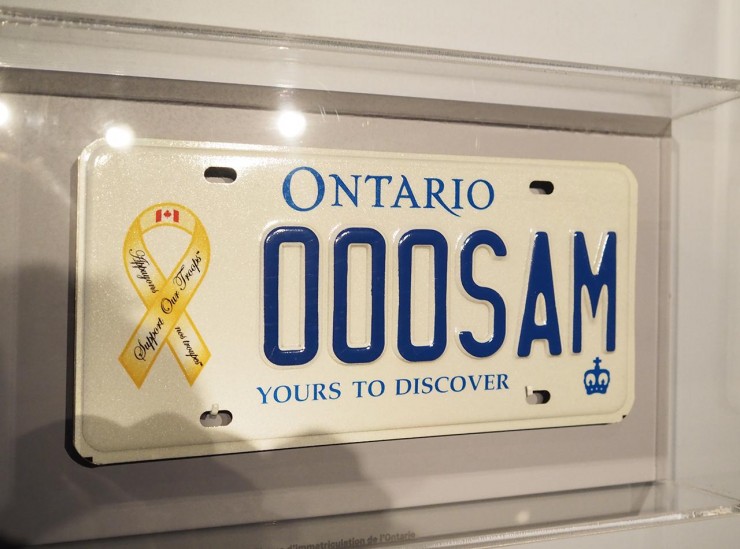 You can even make your own commemoration at the vehicle licensing office.

The last day for Vimy–Beyond the Battle is Remembrance Day, so do hurry to see this significant exhibition. It’s a fascinating and eye-opening experience, especially for those of us interested in Canadian identity and history-making.

For an even greater exploration of the topic, and a solid, concise history of the battle itself, read CWM historian Tim Cook’s outstanding book, Vimy: The Battle and the Legend. I’m not sure it’s available in French at this time.