A Dash Through the Imperial War Museum


Amidst a major renovation 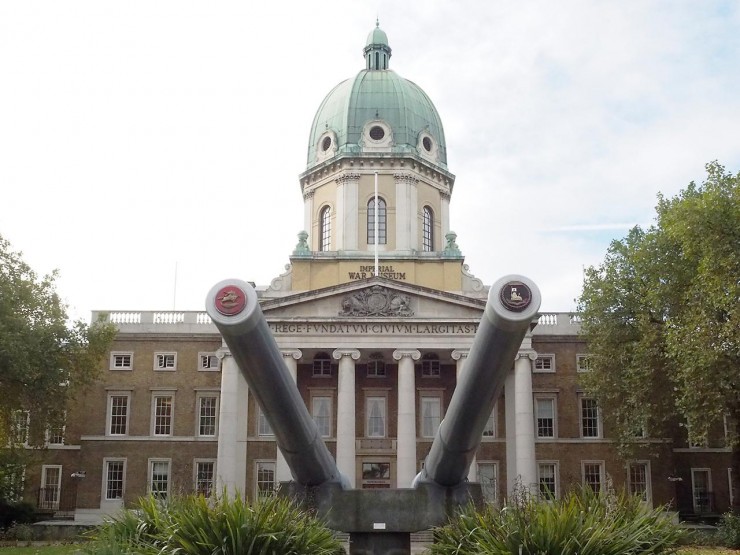 It is wonderfully ironic or fitting that the Imperial War Museum is housed in the former “Bedlam” lunatic asylum.

Sore feet, a dulling of the senses and an irritable impatience with wordy interpretative panels are all hallmarks of “museum fatigue.” This common complaint is usually the result of attempting to take in an entire major museum in a single visit. But many of us in the museum business think we are made of sterner stuff. So, despite the known health risks, I rashly decided to “do” London’s Imperial War Museum (IWM) in a single morning. It almost worked. 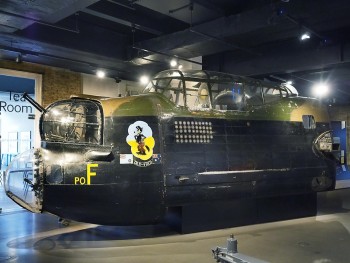 A small number of large and significant artifacts reflect key aspects of the Second World War in the Turning Points:1939-1945 exhibition. This Lancaster bomber saw action from 1943 onwards. 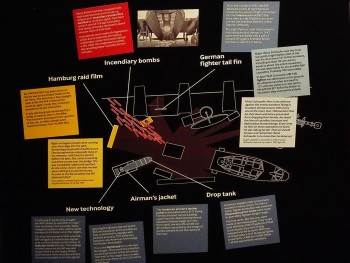 Personal stories are attached to each artifact on the floorplan of the World War 2 gallery— stories from both sides of the conflict.

The museum is several years into a substantial renovation. At the time of my visit, the Witnesses to War atrium, a few side exhibitions and the First World War Galleries were complete. The rest of the museum’s main permanent galleries were in a sort of “lite” mode pending complete redesign. A Second World War exhibition entitled Turning Points: 1934-1945 proved to be a somewhat unsatisfying “history‑in‑point‑form” sort of experience. My first impression was that it catered too much to the modern short attention span—by trying to wring the most effective human history from the smallest number of significant artifacts. Upon reflection, though, given that it is a temporary exhibition, I recognized that this approach does actually work quite well. This exhibition, like the First World War Galleries, presented a lot of personal experience and the relatively even-handed means of interpreting both Axis and Allied perspectives was also quite refreshing. This bodes well for the future permanent galleries.

When I visited the IMW 15 years ago, the atrium was a cluttered space, albeit a fascinating one. It resembled a giant—forgive me—toy store. A variety of suspended fighter planes chased each other up above while below, huge and ungainly beasts of war lined the mezzanines or were scattered across the main floor. The new atrium is narrower and taller, featuring fewer than a dozen large artifacts to represent 100 years of British armed conflict. The galleries rising on three sides bring to mind a cathedral despite the occasional artifact cantilevering out from the exhibit halls into the tall air space. The upper stories are accessed via a monumental set of zig‑zag staircases climbing up the end wall of the atrium. I’m not sure they improve crowd flow, but they’re very imposing and provide great views. 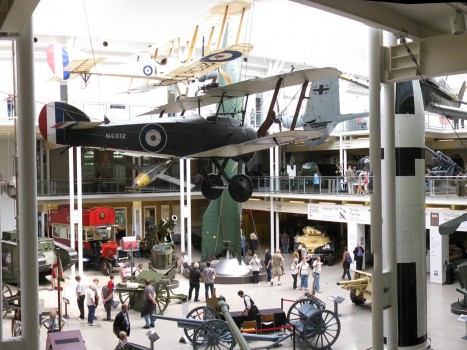 The former atrium and galleries were a bit busy and an example of a much older notion of museum design. (Wikimedia: IxK85) 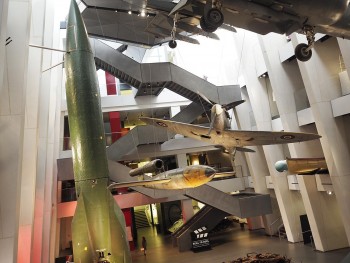 The “Witnesses to War” atrium, with its collection of only nine artifacts, shows a more modern, restrained approach to museum design.

In striking contrast to the atrium, the First World War Galleries on the lower level are extremely dark. Given the delicate nature of many of the artifacts, this is no surprise and the lighting does provide a suitably reverent atmosphere. Two-thousand artifacts made for a rich museum experience featuring a wonderful range of items—from the soldierly minutiae of trench life and combat to monstrous war machines. Distressing and poignant quotations from soldiers and civilians are engraved tomblike into concrete slabs throughout the galleries, creating a written voice that carries through the entire exhibition. The content is often very personal and covers more of the homefront than I have ever seen in a Great War gallery, touching on rationing, munitions manufacture and even conscientious objectors. It’s actually a fairly digital exhibition with a number of immersive and interactive experiences and yet the technology seems to quietly disappear into the traditional interpretation. In all, it is a very satisfying exhibition that can be both brutal and touching. 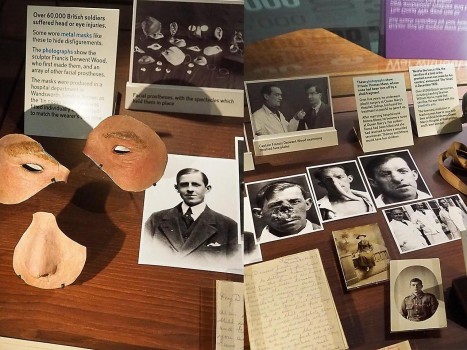 Written correspondence is a major feature of the very personal approach seen in the First World War galleries. This display of injuries, prosthetics and love letters was particularly moving. 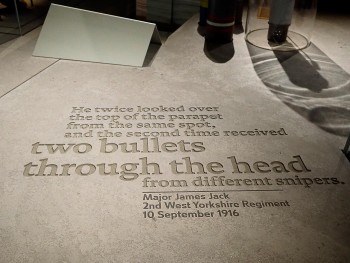 These cutting and often poignant quotations have been engraved into the infrastructure of the exhibits, evoking both a concrete bunker and a grave stone. 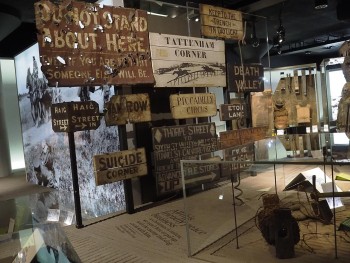 Trench signs were a vital means of wayfinding but also an expression of homesickness and grim humour: a war museum staple.

I confess that I moved through the Second World War and the modern galleries with unwonted speed, deciding to spend my last hour in the Holocaust Exhibition. This part of the IMW is also slated for renewal but it still holds its own for impact and detail. Not for the faint of heart and, as a sign advises you, not for kids, this gallery is a tough one. It follows the genocide from the rise of Nazism in the early 1930s to the ghettoization of Jewish people and to the industrialized wartime murder of Jews and others. As visitors enter a slightly claustrophobic space with angled walls that hang threateningly over them, they learn of the looming catastrophe of 1930s Germany, it’s shocking propaganda and the isolation of the Jews. Visitors then descend a staircase into a dark and brooding atmosphere: this is the wartime experience. Highly personal items, shocking photographs, plus a disturbing heap of shoes bring home the horrifying victim experience and demonstrate the powerful human will to survive. Despite its age, the Holocaust Exhibition is still deeply moving—it is by far the most empathy-inducing of those at the IWM, and I felt a little bruised and battered after having seen it. I’m very curious about how the IWM plans to reinterpret this appalling subject, but the word is that it will involve an increase in survivor testimonials and stories. 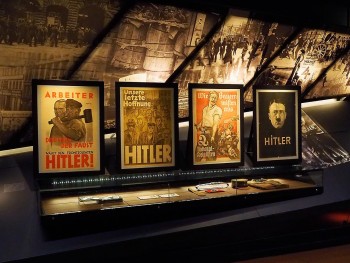 The Holocaust Exhibition evokes the rise of Nazism and the coming storm of genocide. 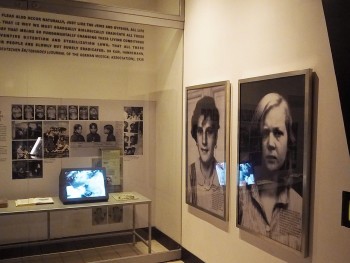 The bizarre “science” the Nazis used to justify their actions is presented alongside the astonishing innocence of its youngest victims.

Reflecting on my wayward dash through the IWM prompts me to advise you not to try seeing the entire museum in a morning. You’ll just hurt yourself. Instead, drop in for a couple of hours and really absorb a gallery or two. This is good advice for any big museum.

Regardless of its state of renovation, the Imperial War Museum remains a landmark destination for visitors to London. Ahead of your visit, go online to see the broad offerings of this remarkable old institution and its satellite locations.