Museums Outstanding in their Fields

The Royal Saskatchewan Museum was built on the site of the Hotel Qu’Appelle, a grand project abandoned during the Depression. (Wikimedia Commons, photo: Scottwood72)

When I was a kid growing up in Regina, the Royal Saskatchewan Museum (RSM) was merely the Saskatchewan Museum of Natural History. Naturally I’d been there a dozen times and was as familiar with it as I was with our local shopping centre. But a fire in the 1990s, a major restoration and a royal designation had significantly altered the museum—for the better. I escorted my partner (also a heritage professional) and her daughter to see the RSM this past summer. They were both looking forward to it; one for quality interpretation the other for furry animals. Neither was disappointed.

Though glaciation, drumlins and mixed‑grass semi‑arid plains were not subjects to thrill a ten‑year-old, the dioramas were a bigger hit than even I had hoped. I’ve seen great nature dioramas in a number of our big institutions, but for sheer detail, believability and ever‑surprising variety, I think the RSM’s dioramas are some of the best. Originally, the dioramas were presented like shop windows but were rebuilt as open‑concept displays, approachable from multiple angles and without glass. Discovering every little gopher, garter snake and meadowlark became a wonderful Where’s Waldo sort of museum experience. They don’t shy away from the uglier realities, either. The timber wolf display features a few smug wolves relaxing after a feed while nearby ravens bicker over the frankly disgusting remains of a caribou carcass, faux bloody in the faux snow. 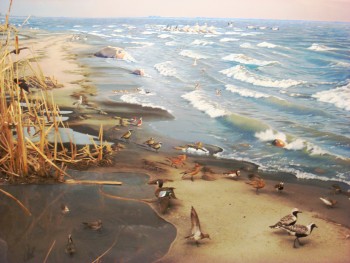 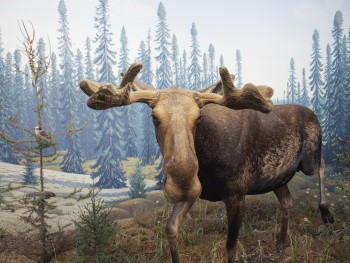 Yes, there are trees in Saskatchewan. And moose, bears, cougars, eagles… 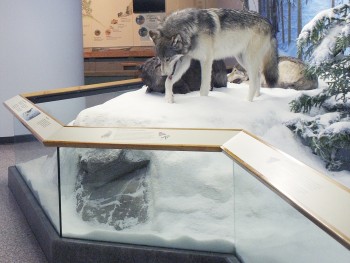 The Royal Saskatchewan Museum allows an impressively intimate view of their displays.

While a must‑do for any visit to Regina, the Royal Saskatchewan also has a satellite location that specializes in local fossil finds. Starring “Scotty”, Saskatchewan’s only Tyrannosaurus rex, the T.rex Discovery Centre is located in Eastend, which is in the southwest corner of the province. Yeah, that’s odd but I supposed everything’s east of something.

The Royal Saskatchewan may have the fascinating dioramas, but for sheer awe-inspiring content and really thorough interpretation, the Royal Tyrrell Museum, in the Badlands on the edge of Drumheller, Alberta, is a top contender for any museum fan’s bucket list. The museum complex sprawls comfortably in one of the innumerable valleys of Midland Provincial Park, a bizarre, cinematic landscape (think Clint Eastwood western) that still yields some of the richest fossil finds in the world.

The Royal Tyrrell Museum is surrounded by walking trails leading into the strange Alberta Badlands.

The museum is laid out, logically enough, in chronological geographical periods (Devonian, Triassic, etc.). Each period zone is introduced by an archway and accompanied by a globe showing the approximate arrangement of the continents during that era. Taking in the early eras, dominated by giant ferns and newt‑like creatures, your anticipation mounts as you catch glimpses of the dinosaur displays in the main area below; let’s face it, that’s where you really want to be. My favourite of the early period zones, however, is the Devonian Reef, an underwater diorama with animals reproduced at 12 times normal size. The undersea scene features a number of creatures so freakishly science fictional that many of them looked more like vacuum cleaners than creations of nature. I had the notion that in 50 years palaeontologists would shake their heads and mutter, “Yeah, I don’t know what we were thinking back then.” 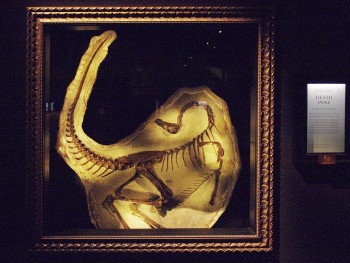 The “Lords of the Land” introductory gallery; fossils as art in a silent, reverent presentation. 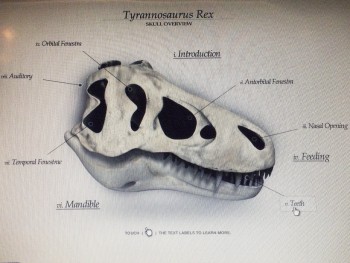 Tablet computers above the main gallery provided in depth material on the functional aspects of a dinosaur skeleton. 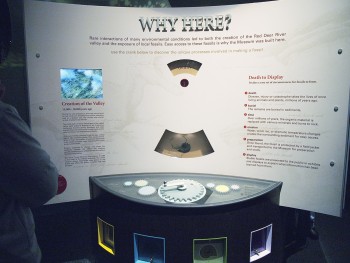 But soon, your anticipation is at and end and you walk into the jaw‑dropping main hall full of dozens of pre-historic monsters ranging in size from that of a beagle to that of a dump truck. It is one of the largest “dinosaur” collections in the world. I used quotation marks because dinosaurs are a limited group within a large cast of characters (pterosaurs, plesiosaurs, ichthyosaurs…) that we, in our lamentable paleontological ignorance, lump together as dinosaurs. Many of the skeletons are the real thing and all are identified as to whether they are plaster casts or original fossils. Most of the skeletons are posed as if in pursuit of one of three common daily activities: searching for lunch, eating lunch or desperately resisting becoming lunch. Painted backgrounds show the animals fleshed out and in the same attitudes as the fossils, adding important context to the scene. Judging by the ambience of the museum, the Jurassic and Cretaceous periods appeared to be punctuated by the hollering of eight‑year‑old boys—presumably desperately resisting becoming lunch.

Every natural history museum will have a few fossils but a warehouse full of such monsters is pretty impressive. 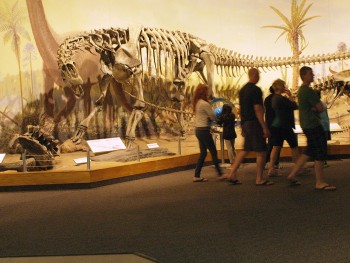 Though this Camarasaurus appears to be taking an interest in a passing group of hominids, it was actually a herbivore. 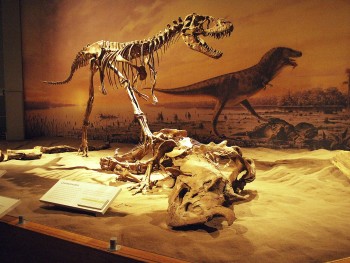 This hapless Centrosaurus appears to have just become a feature on the Cretaceous menu.

This is not a one‑hour experience. The windows of the preparation lab alone could keep you occupied for that long. Apart from the sheer size of the museum and the amount of material to peruse, the building is located in a beautiful landscape full of guided trails leading walkers into and over the fabulous Alberta Badlands. One must visit the hoodoos to call this trip complete. Make a day of it.