The second chapter of the author’s experiences at the 2016 Canadian Museums Association National Conference wherein he listens to speeches, learns about other people’s mistakes, eats more seafood and gets a lesson in Maritime weather.

Day two was all about the keynote addresses. Every conference comes with a number of big speakers and the CMA scheduled most of them on one day. Highlights were our ever‑chatty Parliamentary Poet Laureate George Elliott Clarke, the very witty (she laughed as much as we did) social commentator Laura Penny and the Canada Science and Technology Museums Corporation CEO Alex Benay. Perhaps the most enthralling speaker was author, explorer, film maker and anthropologist Wade Davis. He said next to nothing about museums, but his presentation about his book Into the Silence: The Great War, Mallory and the Conquest of Everest was absolutely fascinating. I bought a copy of his book as soon as I got home. Still, I have to say that a full day of keynote speakers was a bit of a long haul. 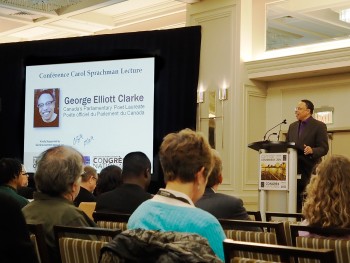 George Elliott Clarke’s speech had simultaneous interpretation. I don’t know how the interpreter kept up. 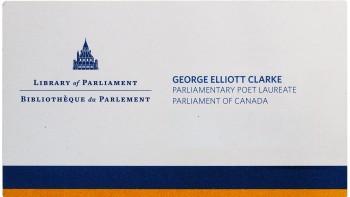 Who’d have expected a poet laureate to hand you a business card? (Yes, I removed the contact info.) 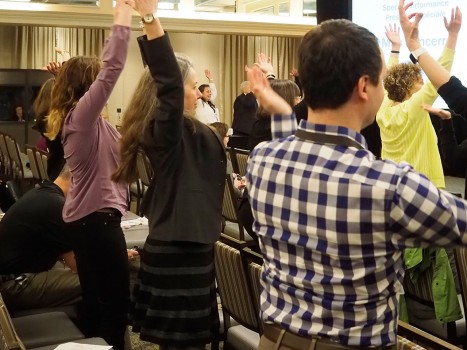 A yoga break during a day of speeches.

While the spring sunshine warmed the coast, day three was a jam-packed marathon of small sessions. They ranged from presentations on mounting exhibitions, user‑generated content, internet engagement and a wonderful program called Ignite!—a rapid-fire set of five-minute presentations on a wide variety of museum projects and initiatives. This sort of day is where you find the meat of the conference, the personal day‑to‑day experiences of museum people like ourselves who meet challenges with unique solutions. The most entertaining session was Even More Learning from our Mistakes, presented by the irrepressible Dr. Xerxes Mazda from the National Museums Scotland. Participants were encouraged to share their most embarrassing blunders, faux pas and disasters in a cheerful, supportive environment. Not only did we all learn from each other’s mistakes, it helped enormously to know that not only do we all make mistakes, but  they are necessary evils in advancing any successful museum project. 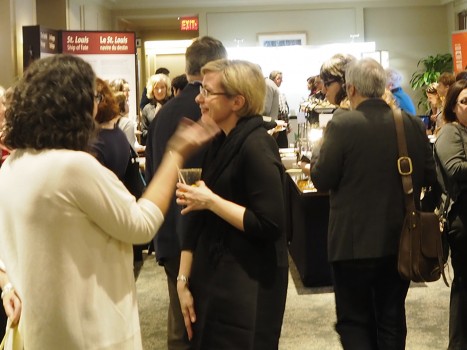 The lively mixing on the trade show floor. 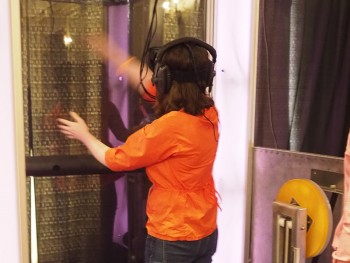 Operating a virtual steam locomotive in the virtual reality booth at the trade show. 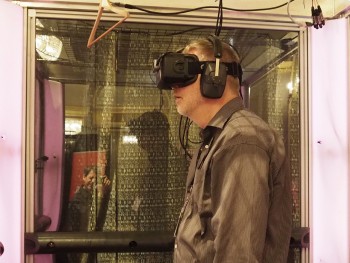 Apparently standing at a virtual bus stop in the VR booth at the trade show.

That evening, in what turned out to be a rather rowdy event, the torch was officially handed over from the Halifax committee to the Ottawa committee for next year’s CMA conference. Our esteemed leader Ken Ross was on the stage co-officiating the event. As an ice‑breaker, everybody was handed half of one of a half-dozen postcards and needed to find a person with the other half. Free “Ottinis” (a fruity vodka drink) increased the crowd’s enthusiasm and Ken had a tough time interrupting the hubbub of dozens of chattering museum folk waving bits of postcards at one another. There were also free beaver tails for all! We eventually calmed down enough to allow the official activities to happen. Soon after, it was time for the end‑of‑conference banquet where we had a great seafood dinner, listened to a few speeches then danced to a rollicking bar band. Actually, a dance floor full of middle‑aged curators and visitor service coordinators is less awkward than your prejudices might prompt you to imagine. 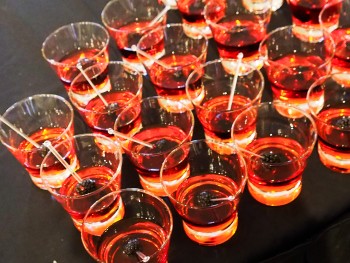 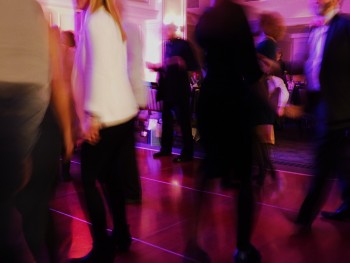 Research coordinators, historians and interpretation managers let their hair down on the dance floor.

And I awoke the next day to a blanket of soggy snow! Nonetheless, I rashly decided to go ahead with my frugal plans to take the bus to the airport. Though it is a pleasant stroll on a nice day, when it is hovering around zero and raining ready-made slush in a howling northerly gale, getting to that bus stop becomes a grueling feat of endurance and wet trouser cuffs. It cost me my drugstore umbrella and a certain amount of dignity, but I got to the snowy terminal on time.

The depressing view from the Halifax airport terminal on 15 April!

I look forward to seeing all my new museum friends next year here in the nation’s capital for the 2017 Canadian Museums Association National Conference. I’m sure it will be a great conference, I just can’t guarantee it won’t snow.