Rebellion at the Museum 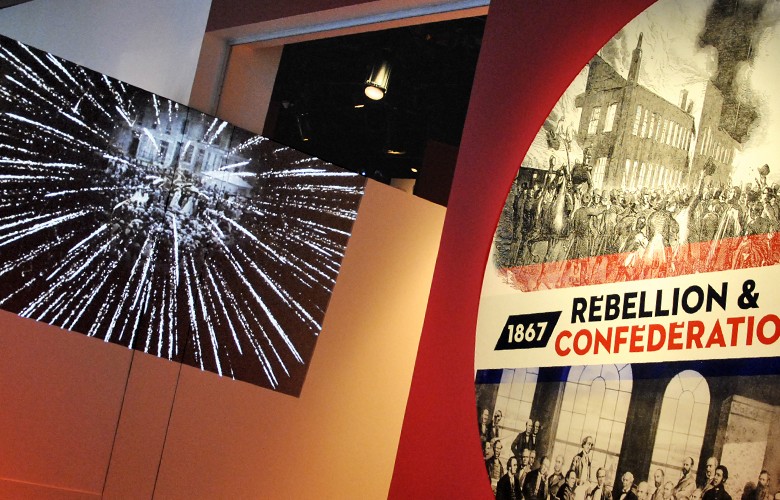 The entrance to the exhibition off the temporary exhibitions hall on the main floor of the museum.

This past spring our curators presented a mini-exhibition on “Phantom Banks” at the Royal Canadian Numismatic Association convention in Mississauga, ON. (See blog: 30 January 2015) Phantom banks? Forget any notions you may have about zombie branch managers or money transfers from beyond the grave. Rather, think of 19th-century criminals printing bogus bank notes and passing them in the local economy. We are now in the process of producing a feature exhibition on phantom banks to be shown at the Canadian Museum of History (CMH). It will be in the same display case as our current exhibition, CENTimental Journey. (You can find it off the Grand Hall, beside the Canadian Stamp Collection. Drop by before 26 June!)

The era of the phantom bank coincided with a period of rebellion in British North America and the start of the 30-year road to Confederation. For a little inspiration and a sense of compatibility, we took a field trip to see 1867 Rebellion and Confederation at the CMH. 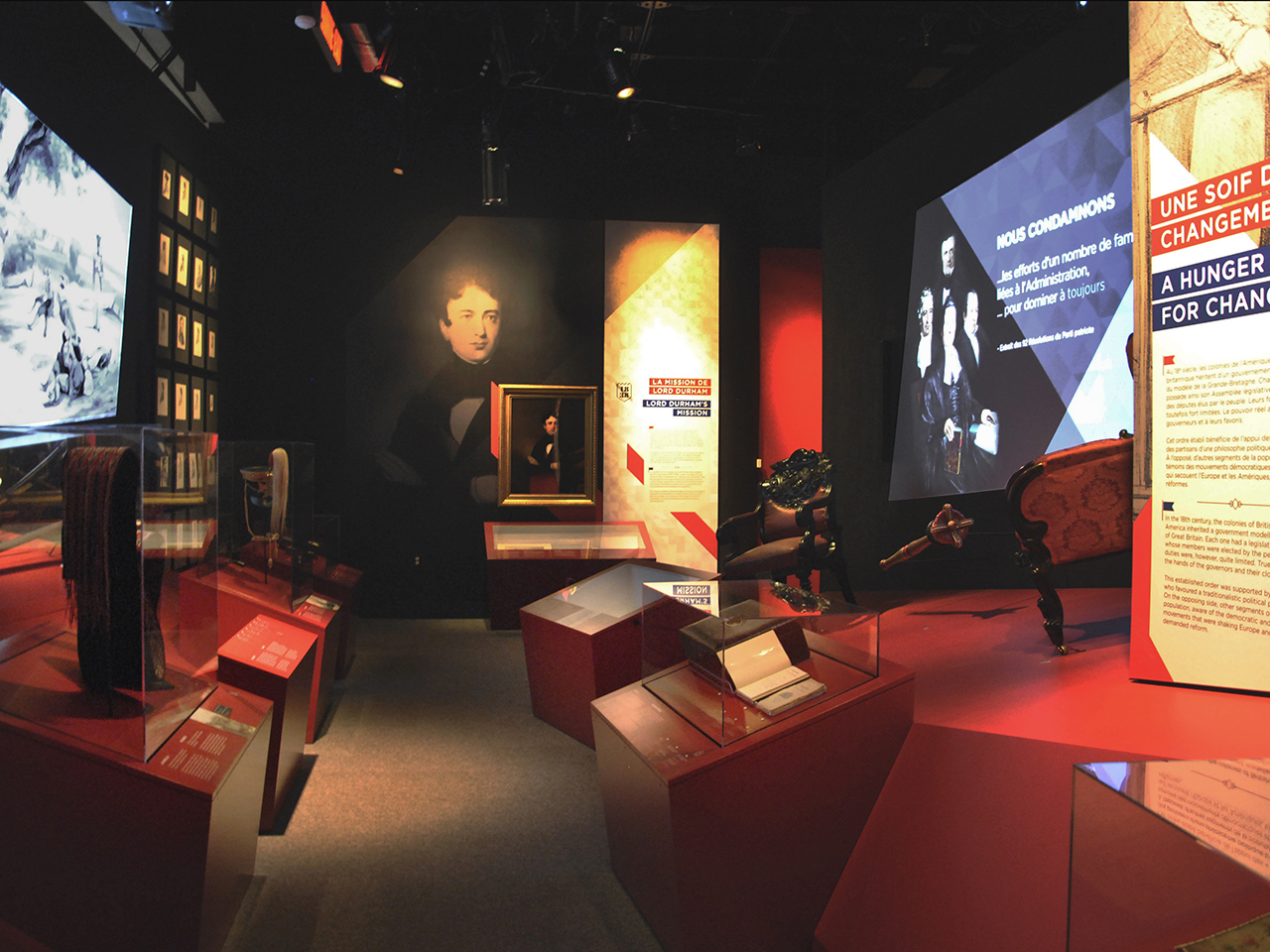 The crazy angles and angry colours of the exhibit’s first gallery. 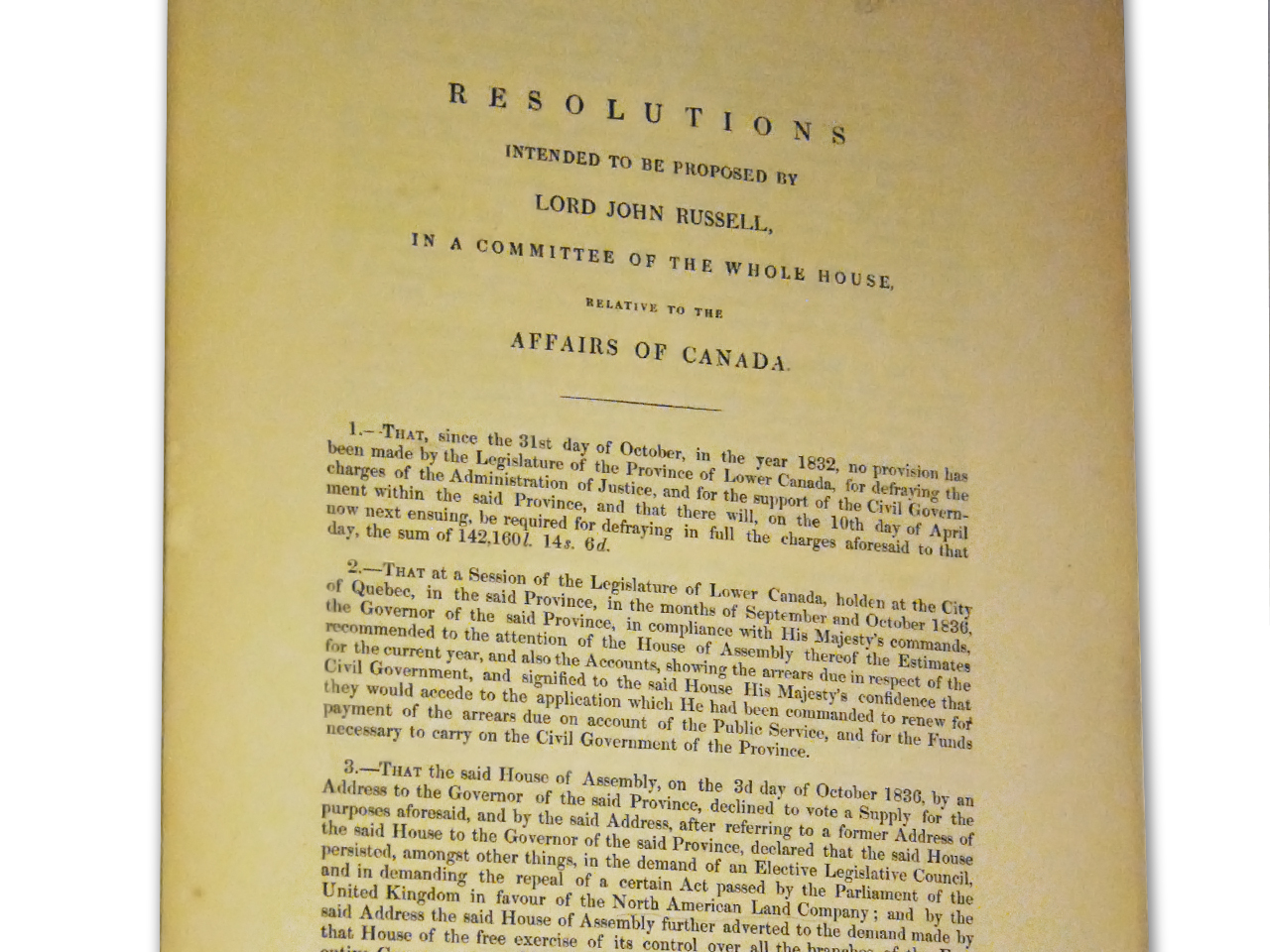 The British response to the 92 resolutions of reform for Lower Canada resulted in more restrictions to local government, feeding the fires of rebellion.

The first things that struck us as we entered the exhibition were the crazy angles of the surfaces, the jagged designs, the bright red accents: all analogous to the tension and restrained anger of the age. This visual tension diminishes as the exhibit progresses but returns periodically depending upon the subject explored. The artifacts are fascinating and historically evocative. They are also frequently paper‑based and therefore delicate and vulnerable. Actual documents such as reports on British North America, the British North America Act itself and the Resolutions of the Québec Conference of 1864 (the latter with Sir John A’s personal doodles) are there to be seen for real. Mind you, be prepared to squint since they are displayed under very dim light. Indeed, the entire exhibition is rather dark, with spots of bright light on resilient artifacts and text panels. This has everything to do with the length of the exhibition and amount of accumulated light the artifacts are exposed to. The astute observers among you will notice the Bank of Canada Museum’s contribution. It is in the form of contextual coins and bank notes (Were you expecting shoes or firearms, maybe?) on loan from the National Currency Collection to the CMH for the duration of the exhibition. The notes are featured in a gallery of artifacts illustrating the economy of the day, representing both the wealthy and the poor. This comparison parallels the volatile atmosphere of the time, where the coexistence of extreme wealth and power with extreme poverty was very stark. 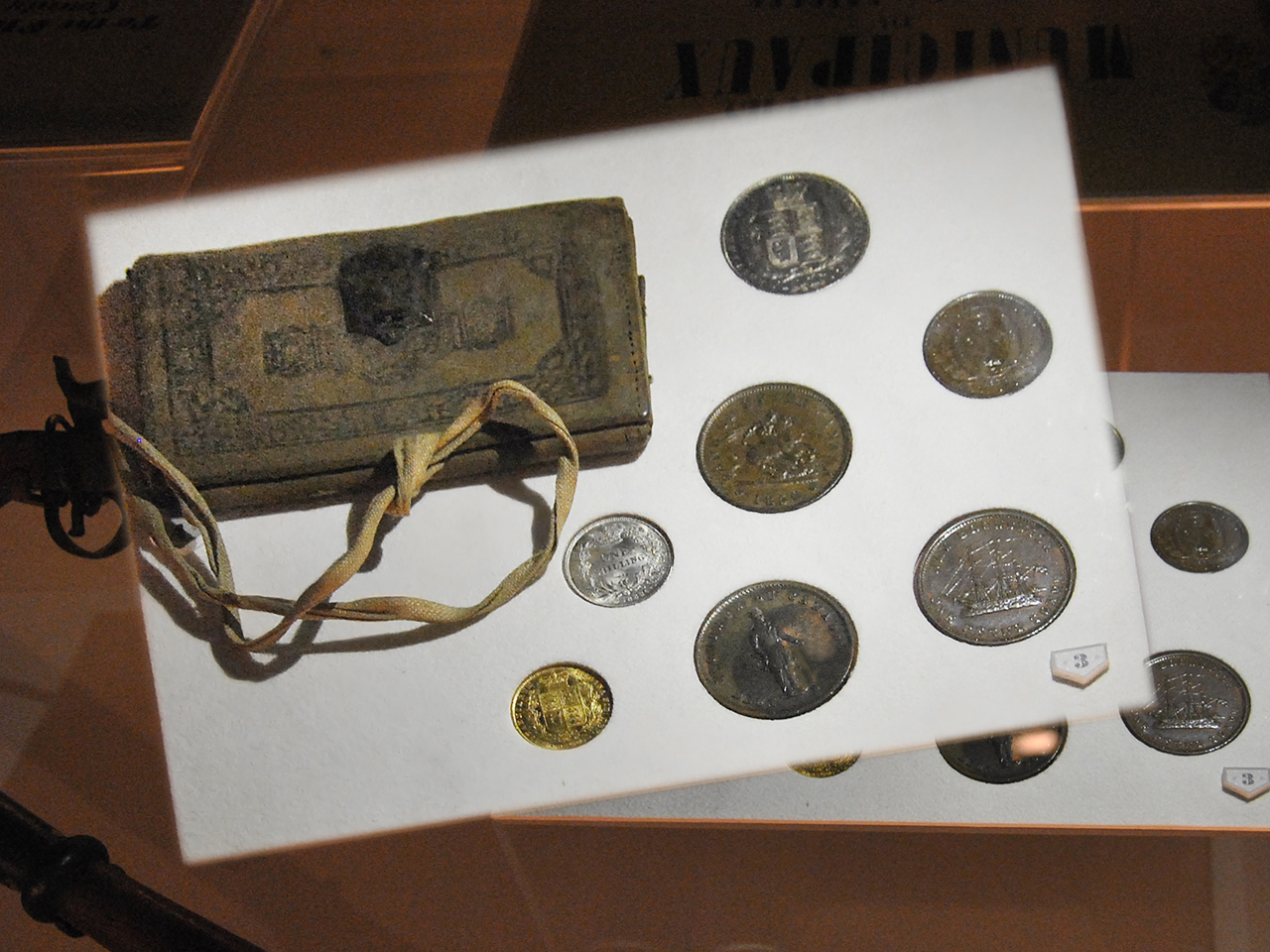 Some of our pre-confederation coinage loaned by the Bank of Canada Museum to the exhibition. 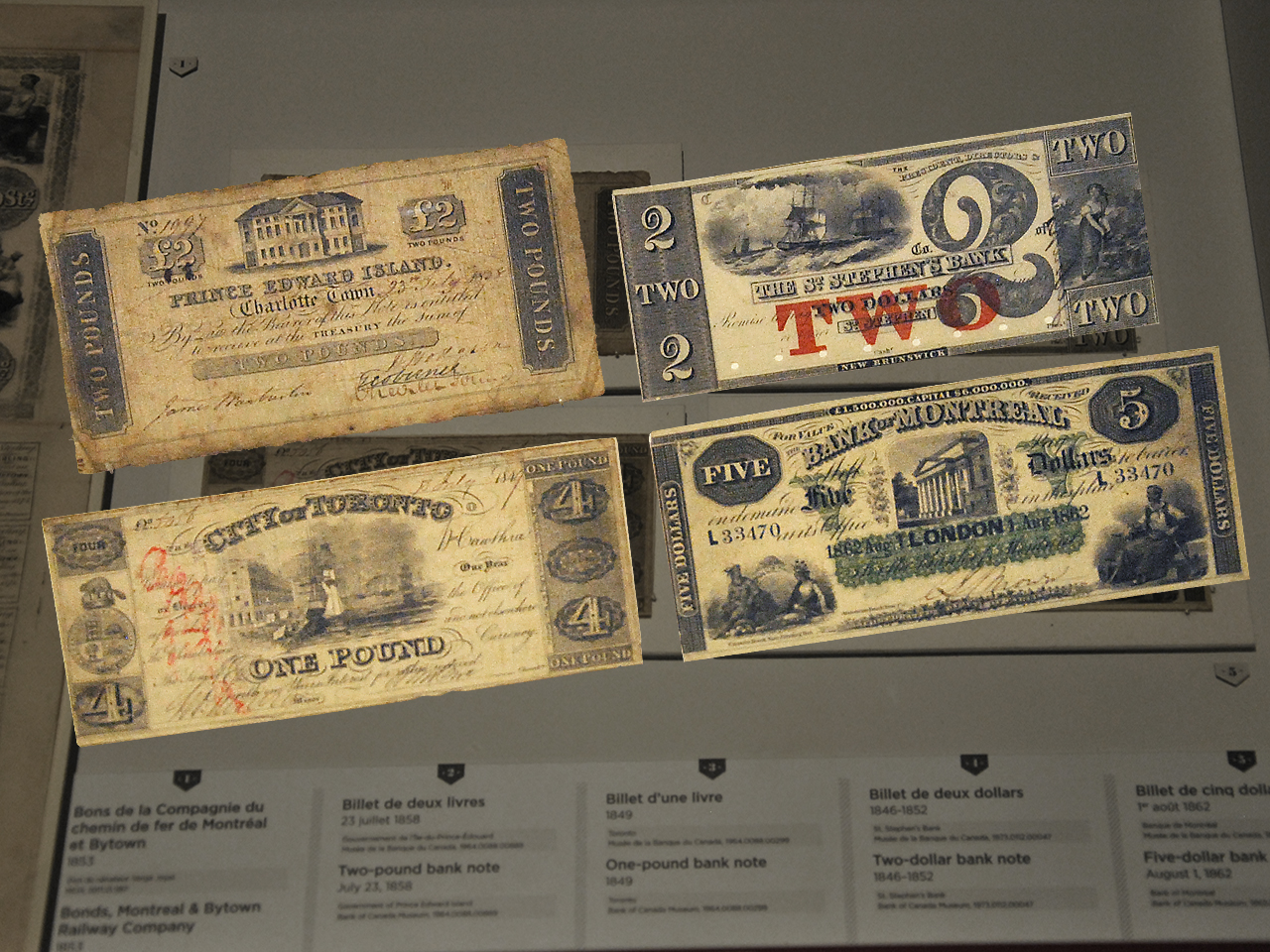 More of our artifacts: paper money at that time was issued by provincial governments, municipalities, banks or merchants. 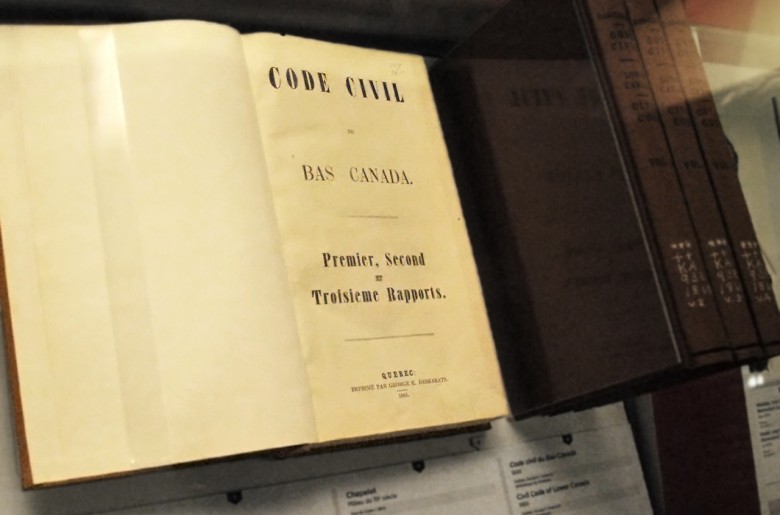 Civil code or code of laws of Lower Canada (Québec).

One of the final galleries is more installation art than exhibition. Over a symbolic table is a series of suspended top hats representing the men of the Charlottetown Conference. A stage set with a rear projection screen evokes the ball that took place later that week. Sitting on that stage, alongside other period artifacts, is the actual table at which the delegates of the historic 1864 conference sat and deliberated their future nation. That table (long since shortened by almost 2 metres) has for decades stood under the tall windows of the Legislative Assembly of Saskatchewan Library, of all places. Even as a child accompanying my parents to the library, I wondered how it got there. Turns out it was shipped west to be used by the legislative assembly of the Northwest Territories (until 1905, Saskatchewan and Alberta were part of the Northwest Territories) and simply never left Saskatchewan. 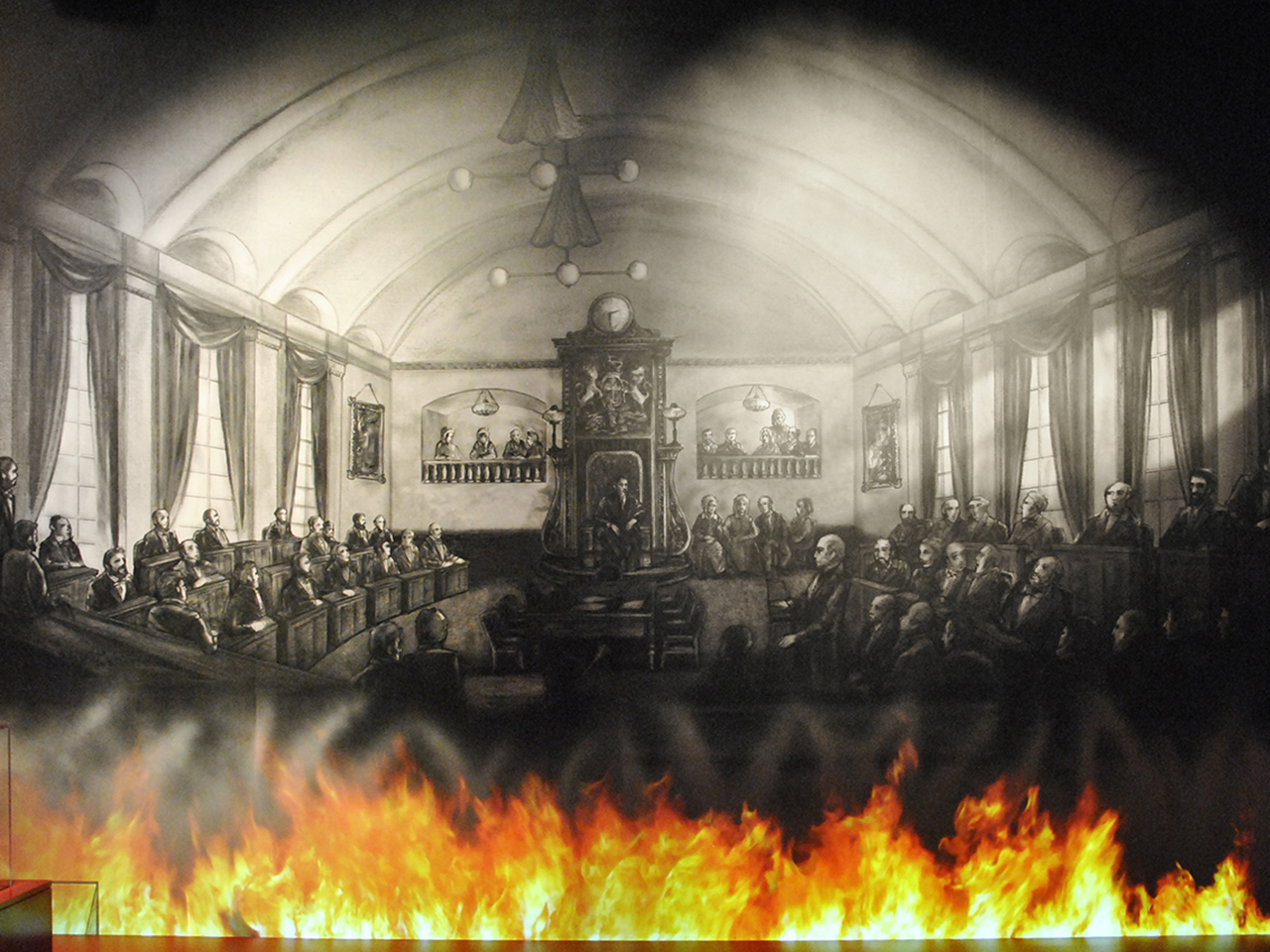 A huge projected animation evoking the burning of the parliament building of the Province of Canada (Québec and Ontario) in Montréal, 1849. 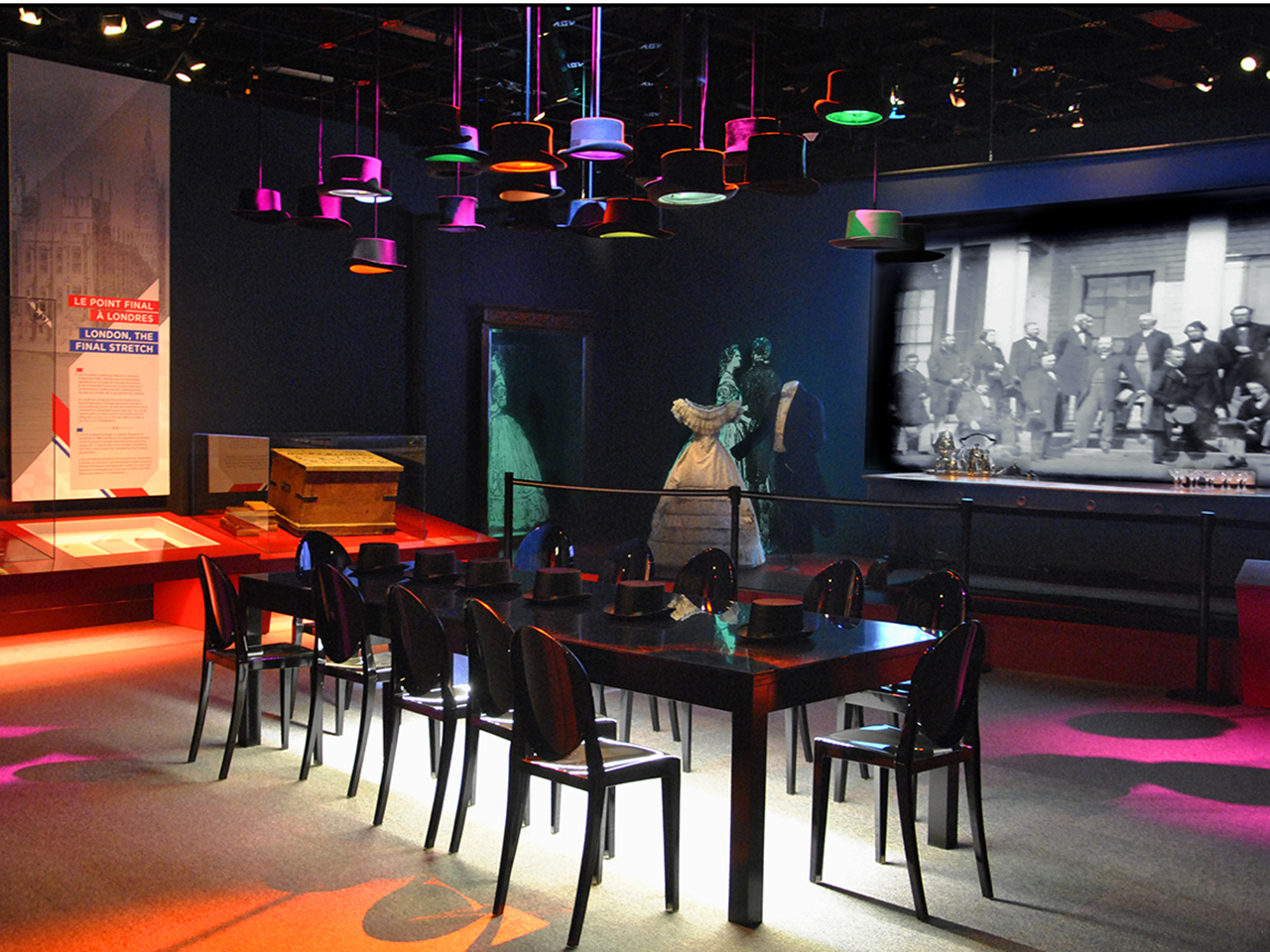 Top hats representing delegates at the various conferences ultimately leading up to the British North America Act and Confederation. 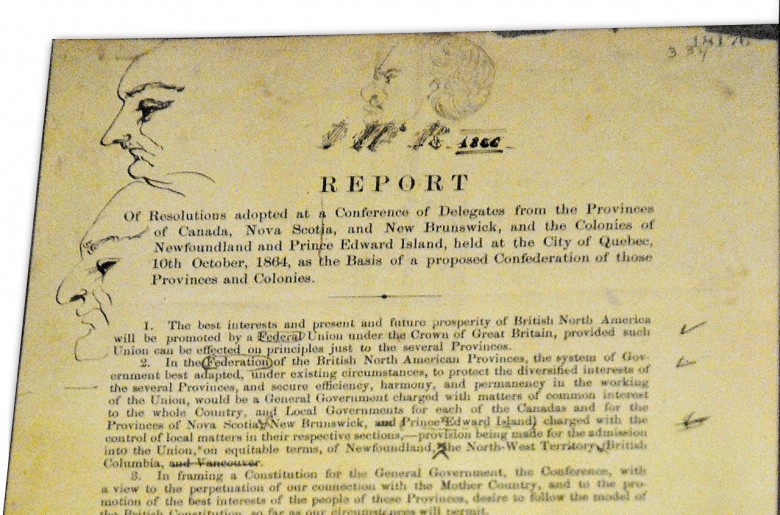 Sir John A. Macdonald’s personal doodles on a copy of the Québec Conference report of 1864.

The exhibition is at once dark and bright, sombre and electric and well worth a visit for anybody looking to get in touch with our nation’s political roots. We walked away with a number of good ideas for our own exhibition, although so far none of them call for quite so many top hats.