Alex Colville at the AGO


It seems silly to blog on an exhibition that is already over. I was disappointed with myself when I discovered that I’d gotten behind on a few things and didn’t get this blog done before the exhibition closed. Then I saw that it is coming to the National Gallery of Canada this April, so I don’t look so negligent after all. We’re just going to pretend that I knew all along that it was coming to the National Gallery of Canada.

There was a moment when it looked as if I was going to the Colville show alone­. When we entered the always-impressive lobby of the Art Gallery of Ontario, we discovered that there was a Michelangelo exhibit (Michael who?) on at the same time. It took a bit of persuading to get my partner to accompany me but, as it turned out, she was as taken with the Colville show as I was. 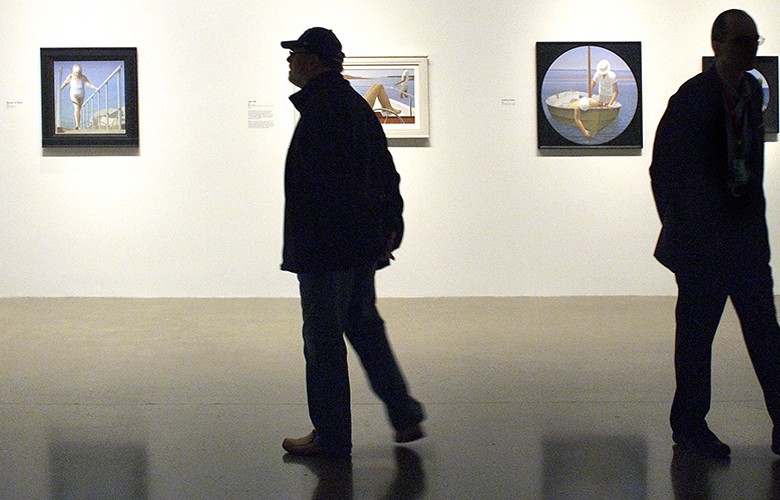 The work is well spaced, with lots of room for visitors.

Alex Colville is a broad retrospective that covers the artist’s entire career, from before the Second World War until his final paintings of his lifelong muse, model and beloved wife, Rhoda. The show was arranged chronologically, albeit loosely, with islands of thematic groupings: dogs, family, war, nature, et cetera. But no matter the content of the images, be it a fox terrier or a Honda Civic, they are always just a bit…disturbing. The more so en masse. 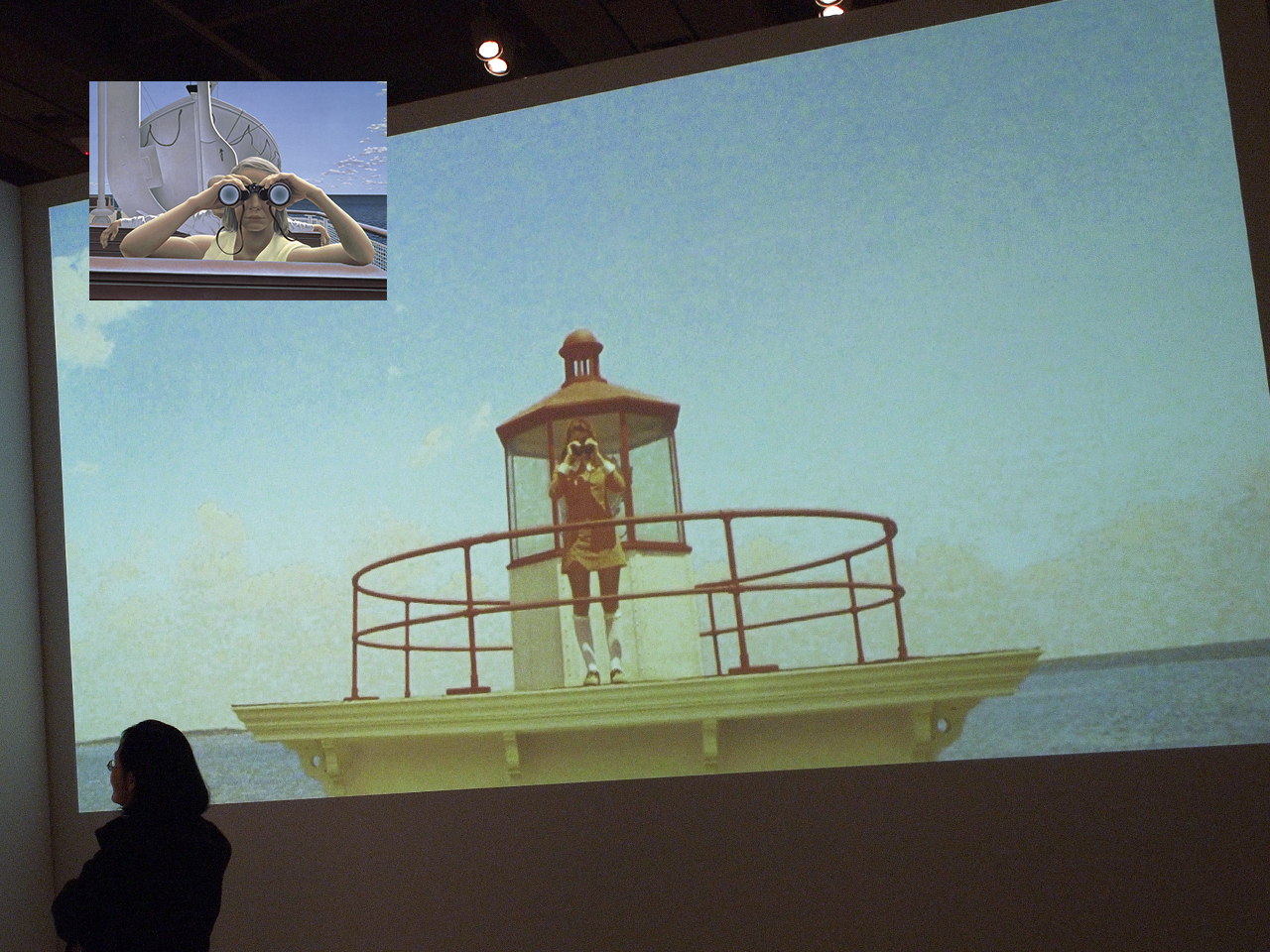 Kara Hayward as Suzy Bishop looks down on us in Wes Anderson’s Moonrise Kingdom with, inset, To PEI. 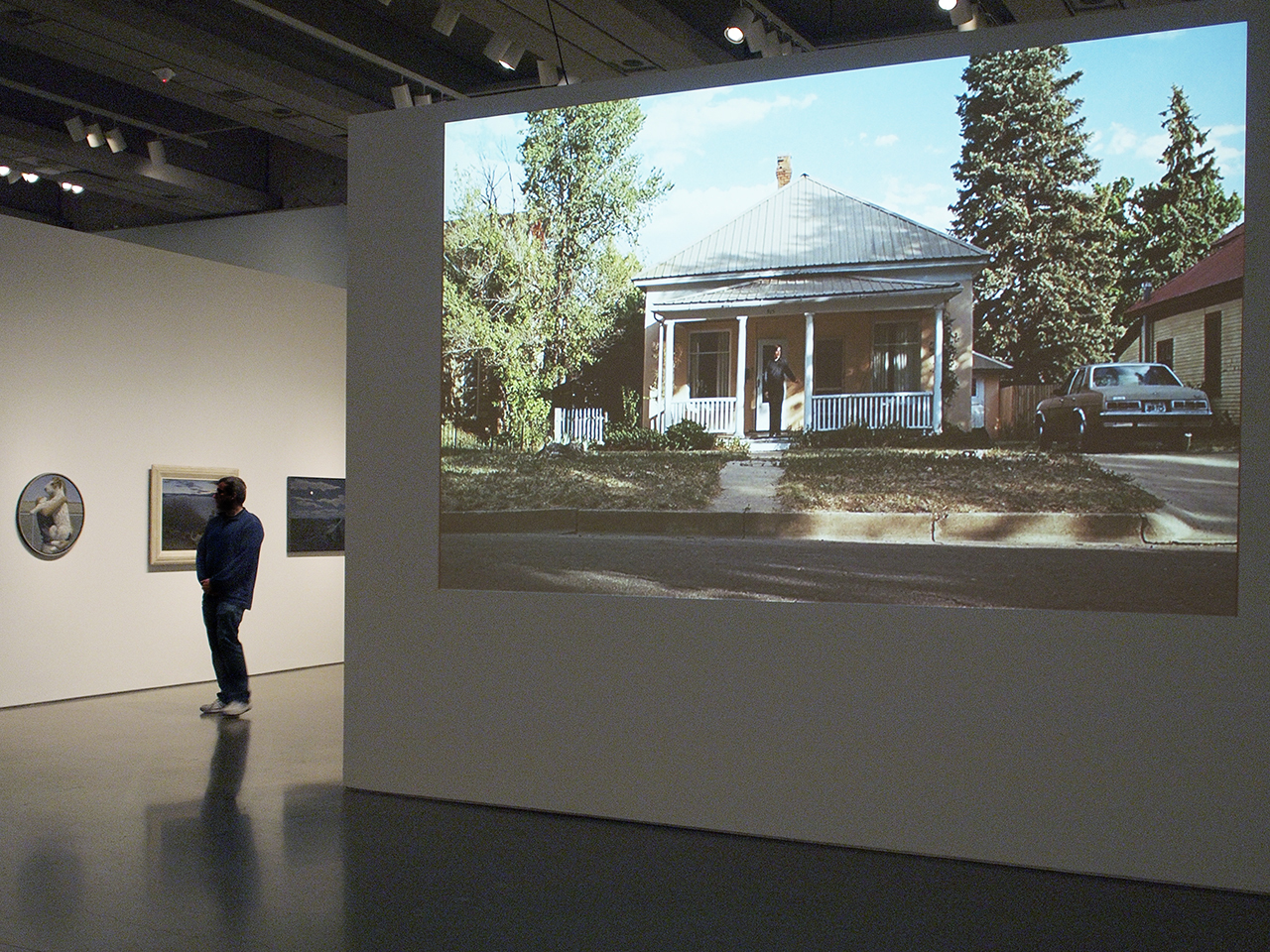 Scene from the Coen Brothers’ No Country for Old Men. Beyond are the paintings featured in The Shining. 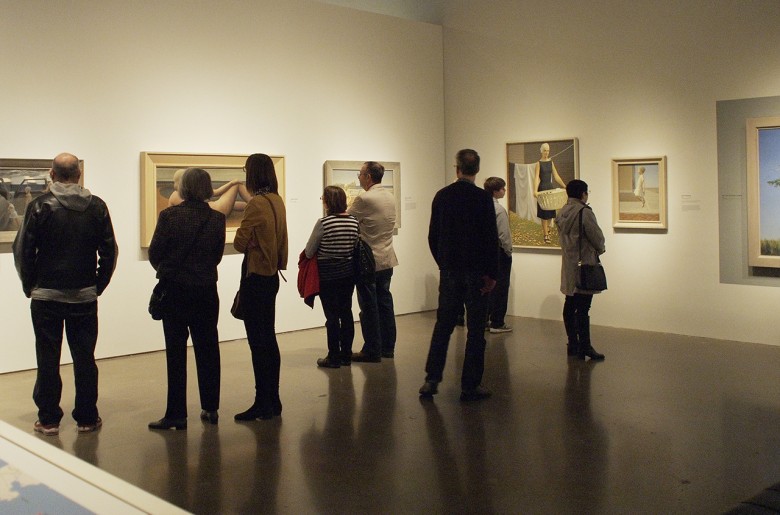 Saturday is not the quietest day to see this show.

Walking into the main space, I was immediately confronted by an enormous projection of a scene from Wes Anderson’s film Moonrise Kingdom; the stillness of the teenager peering through binoculars evoked Colville’s To Prince Edward Island. Carrying a far more subtle Colville reference was a tense scene from the Coen Brothers’ No Country for Old Men. In this clip, there is an almost sickening feeling that something dreadful has played out just beyond the frame—a disquieting sensation that is frequently present in Colville’s work and often remarked upon by critics. Such film comparisons were an unexpected delight and served to underline the breadth of Colville’s cultural influence. Stanley Kubrick’s The Shining provided, in my opinion, the most interesting example of that. Kubrick, who maintained tight control of his films, chose Canadian art to feature in the Overlook Hotel. Several of them were Colvilles. It was fun to later re-watch The Shining and play “spot the Colville.” We found three of the four; one hanging in the notorious room 237 (“No, don’t go in that room, Danny… hey, there’s a Colville!”). For a film whose horror is frequently presented through atmosphere and metaphor, it was even more fun to later ascribe ominous meanings to the placement of the paintings. 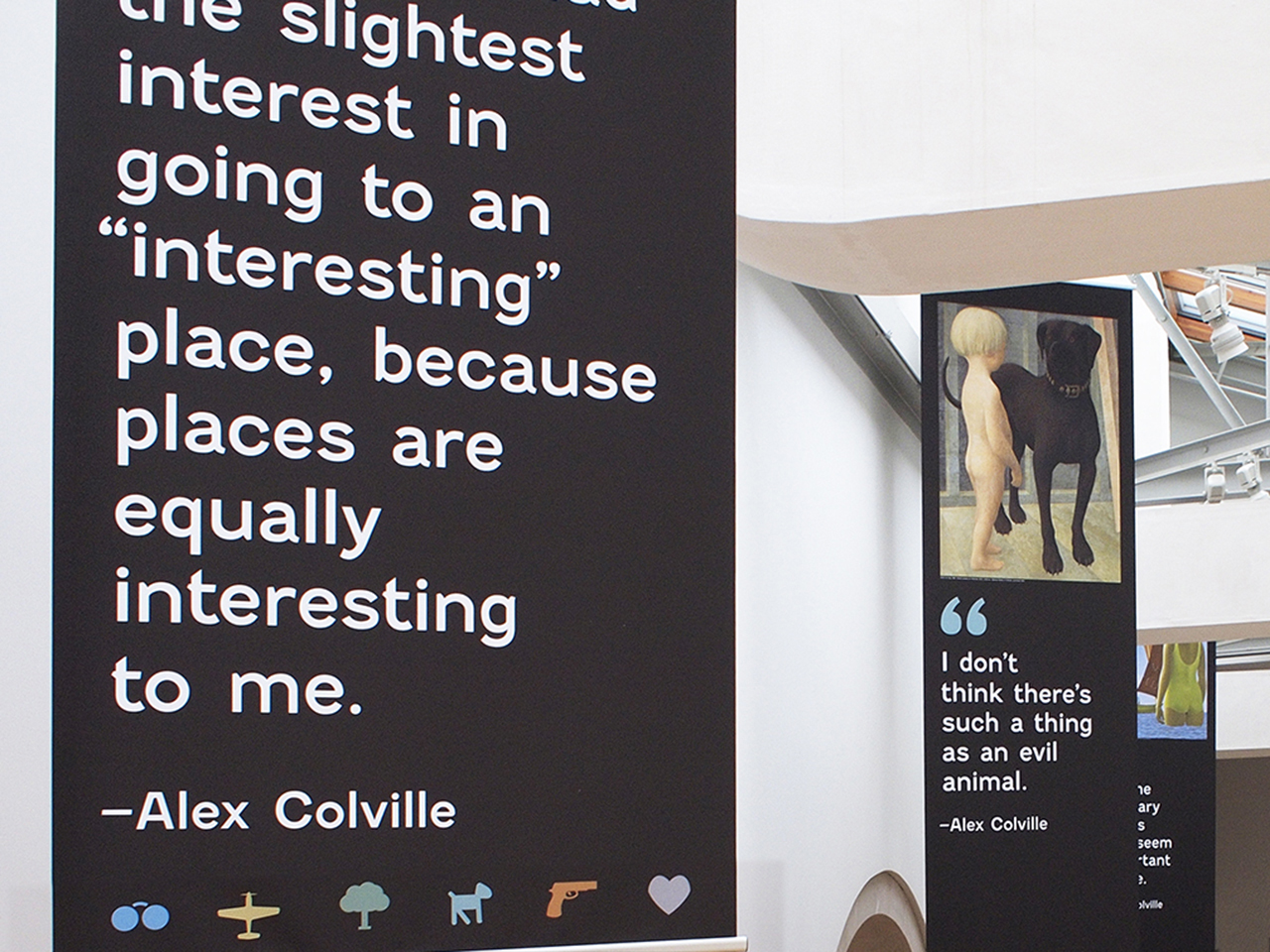 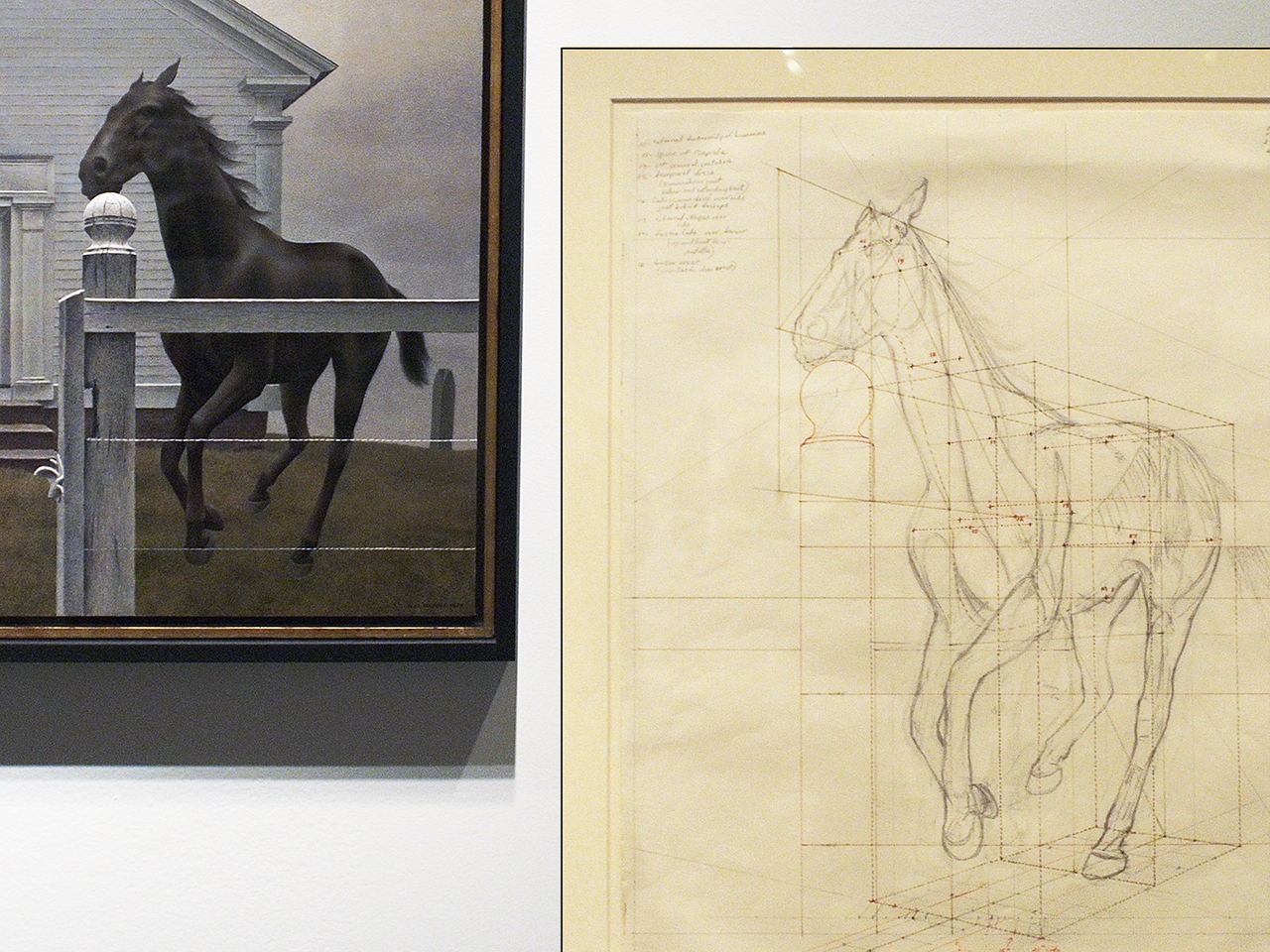 Colville carefully worked out all aspects of his paintings in a sketched map of perspectives.

Presented as a large grid is Colville’s underappreciated contribution to Canadian money (see the blog, 30 July 2013). The six photographs, by artist William Eakin, are enlargements of the 1967 commemorative coin series Colville designed for the Royal Canadian Mint. Eakin chose worn coins to evoke how millions of Canadians once walked around with tiny Alex Colville pieces jingling in their pockets. Regardless of Eakin’s intentions, I think our curators would still collectively cringe at the coins’ merely “fair” condition. 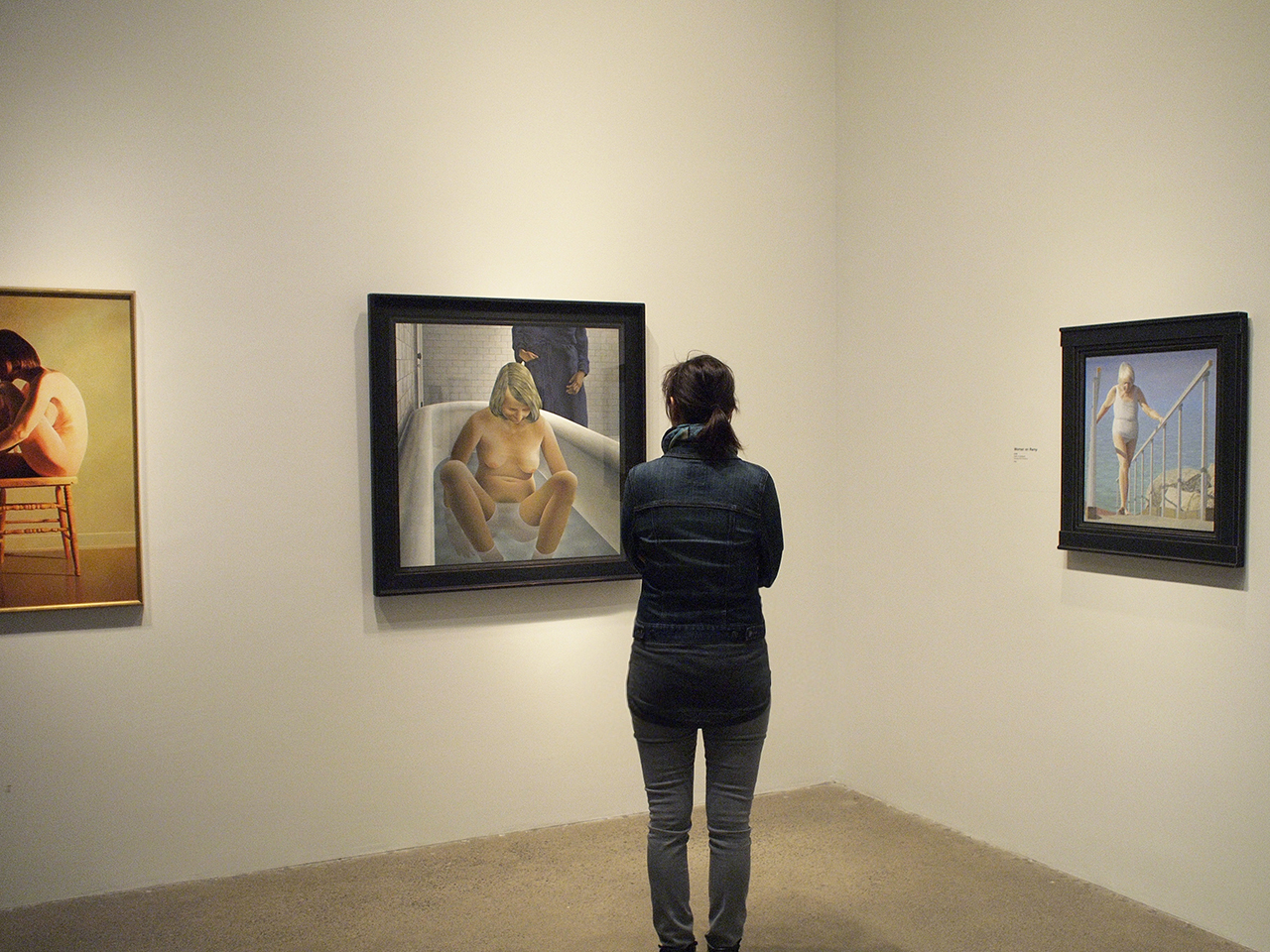 The commonest subject for Colville’s work is his wife Rhoda. 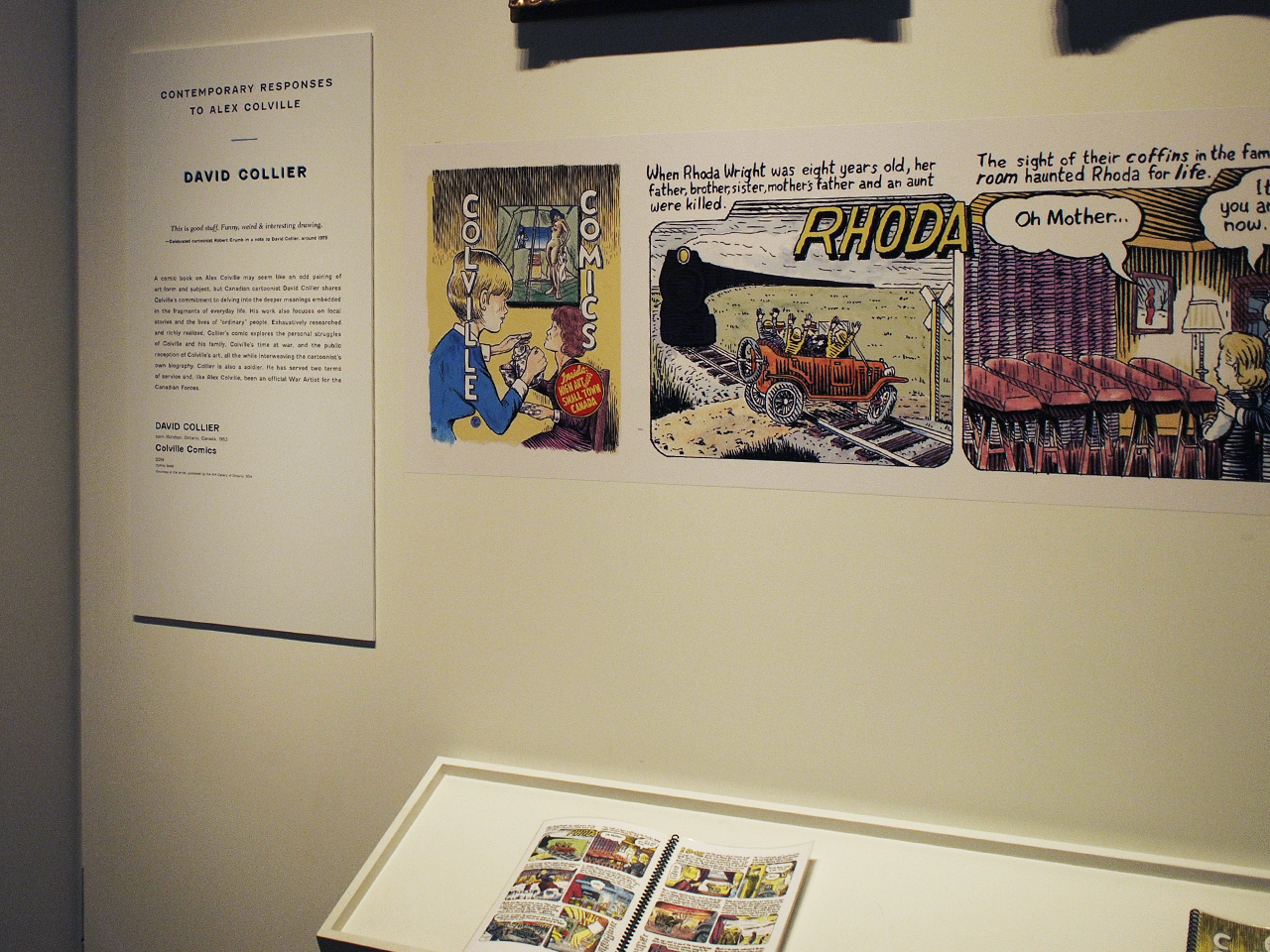 Comic books based on the life of Alex and Rhoda Colville.

Rounding out this show are comic books, photographs and films of Colville’s relationships with family, dogs and the Maritime landscapes that surrounded him. He seemed a man who had the most enviable of lives; this landmark retrospective is one that is not to be missed.

Alex Colville begins 23 April 2015 and runs through 7 September at the National Gallery of Canada.