We Drop into Pointe-à-Callière in Montréal


The museum that’s so nice, we saw it twice.

During two trips to Montréal this past July, as part of our ongoing program of museum tours, the planning team visited the Montréal Museum of Archaeology and History at Pointe-à-Callière near the old city waterfront. As a large museum given over to archeology, it is unique in Canada. But, as a museum built over the subterranean remains of several generations of architecture, it is unusual for anywhere.

Our first trip through it was mainly to experience their striking multi-media presentation. Made by the folks who brought you ‘Mosaika’ on Parliament Hill, the presentation was a high speed trip through the history of the site of Montréal. Its dazzling animated graphics mixed with illustrations and historic photos was projected, via a dozen digital projectors, onto three walls of screens and into the ruined foundations of the Royal Insurance Building (1861), over which the museum is built. 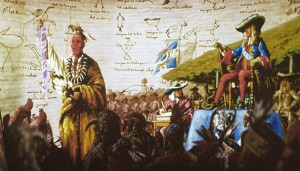 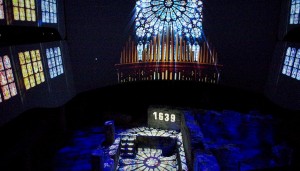 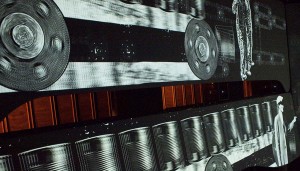 The museum is built on top of a layer cake of history dating from First Nations’ fishing sites, early contact French settlements, the French colonial era, the English regime, and to the 19th century. In the (frankly astonishing) ‘crypt’ beneath the museum, you can see the foundations of houses, a fountain, and a hotel, traces of wooden palisades, paved streets, a grave yard and the great arched sewers built in the 1830’s. All of these atmospherically lit details are in among the labyrinths of wall foundations of the Royal Insurance Building, the last occupant of the site. 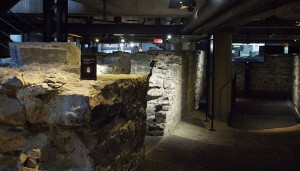 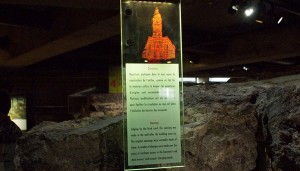 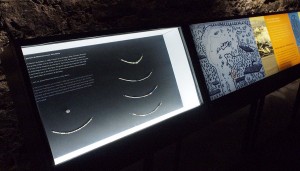 Our second trip was slower, taking in the touch screen displays, all the myriad little architectural details scattered throughout the crypt and these amazing projected talking heads that seemed to float in space as they told their story. We never did get to the current exhibitions. I guess we’ll have to go again. 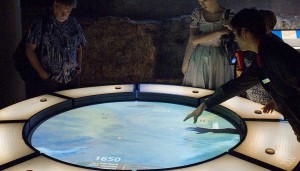 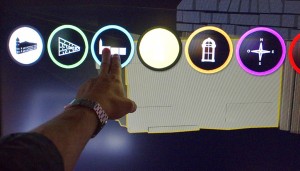 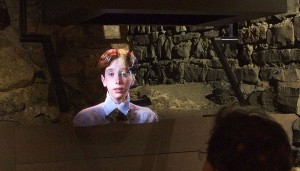